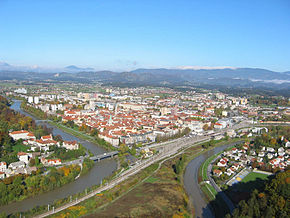 Celje [ ˈtsɛ̀ːljɛ ] ( German Cilli or Zilli [ ˈtsɪlɪ ]) is a town and municipality in Slovenia . With 38,079 inhabitants (at January 1, 2017) is the core city of Ljubljana and Maribor , the third largest city in the country, as a municipality takes her 49,380 inhabitants (at January 1, 2017) to Ljubljana, Maribor, Kranj and Koper the fifth one. It is located in the historical Spodnja Štajerska ( Lower Styria ) region and in the statistical region of Savinjska .

The city of Celje is located on the Savinja River in the southeastern part of the Celje Basin - around 70 km northeast of the regional capital Ljubljana . In Celje the Hudinja flows into the Voglajna, which flows into the Savinja in the urban area like the Ložnica. The cityscape is dominated by the castle hill.

Celje is the economic center of the region and a traffic junction between Ljubljana in the west, Maribor in the north, Zidani Most in the south, Velenje and Slovenj Gradec in the northwest and Rogaška Slatina in the east. Laško is a larger neighboring town of Celje.

Population of the localities

In addition, the municipality is divided into 39 localities, which, however, have no administrative significance. The German names in brackets were mainly used by the German-speaking population until the area was ceded to the Kingdom of Serbs, Croats and Slovenes during the Habsburg Monarchy and has been unusual since 1929, when the merger to form Yugoslavia .

The city ​​council consists of 33 members who are made up of members from eight parties and political groups. Mayor is Bojan Šrot ( elected in 2006 ).

The first demonstrable settlement originated in the Hallstatt period.

Under the Celts (after 400 BC) the place was called Kelea and was part of the 200 BC. Formed the Celtic kingdom of Noricum . Rome absorbed Noricum around 15 BC. BC initially as a tributary kingdom, from Emperor Claudius (41–54) it was completely a Roman province and thus also the city of Kelea, from now on better known under its Latin name Celeia .

Emperor Claudius elevated Celeia to a municipality in 46 AD , with it receiving Latin city rights. The city at that time is described as rich and densely populated with multi-storey marble palaces and wide squares and streets, fortified with walls and towers. It was on a Roman road from Aquileia to Pannonia , the eastern route of the Amber Road . The Mars temple of Celeia is said to have been known throughout the Roman Empire.

As one of the nine Roman cities of Noricum, Celeia administered its southernmost tip from the provincial border in the south to just before the Drava . This district bordered the administrative area of Flavia Solvas to the north and that of Virunum to the northwest . Two duumviri , who acted as city judges, two aediles who advocated compliance with laws and market rights, a quaestor who administered the city treasury, and a 100-member city council headed the city.

In the vicinity of the municipality at today's Ločica ob Savinji there was a legionary camp, which was built in the 2nd century by the Legio II Italica and is the first known camp.

After the split of Noricum during the imperial reform of Emperor Diocletian , Celeia belonged to the province of Noricum Mediterraneum ("Inner Noricum"). Under Constantine I (272–337), Celeia was assigned to Aquileia around 320. From the middle of the 4th century until around 800 it was a bishopric.

Under Emperor Gallienus , the province of Noricum was described as devastated. After the fall of Rome after AD 476, the new king of Italy , Odoacer , had Noricum evacuated as it could no longer be held. With this order, the last remainder of the Roman population of Celeia migrated to Italy.

Cilli Castle, Obercilli, seat of the Counts of Cilli

It is unclear whether Celeia belonged to the Slavic empire Carantania in the 7th to 9th centuries , since historians do not agree on its southern border. In 976 Celeia came to the newly founded Duchy of Carinthia of the East Franconian and Holy Roman Empire . Then it became the center of the Sanner Mark (saunas) , which was separated from it and which opened up in Styria in 1311 , and duchy since 1180 . Wolfhold von Admont mentions the city in his chronicles written between 1122 and 1137 under the name Cylie , which later became Cilli in German and Celje in Slovenian .

In the years 1341-1456 Cilli was the seat of the imperial county of Cilli . It was in the first half of the 14th century Market rights and on 11 April 1451 under Count Friedrich II. Of Celje city rights . After the murder of the last male count of Cilli Ulrich II von Cilli in 1456, the city fell to the Habsburgs, who at that time already ruled over Styria.

Hartmann Schedel describes the linguistic situation in the former county of Cilli in his chronicle (Nuremberg 1493) as follows: “The people in the Stetten are usually German . Vnd the pawrvuolck here half windy . Inside here is an old stettlet that is called cili. "

In the 16th century, the Reformation found supporters in particular among the nobility and bourgeoisie of Cilli, Sachsenfeld and Tüffer (all three in the Sanntal ), with about 99% of the city population in Cilli becoming Protestant . Since the Archduke of Austria did not tolerate Protestant churches in the cities, the Protestants built a magnificent church in Scharfenau near Sachsenfeld, the construction of which took twelve years. In the course of the Counter-Reformation , the future emperor, the Austrian Archduke Ferdinand , had this church blown up in 1598 and built a Capuchin monastery in Cilli instead . In 1600 the church in Scharfenau was razed to the ground and could no longer be found; Nevertheless, the memory of the Protestants remained alive into the 20th century.

On April 27, 1846, Cilli was connected to the railway network with the opening of the Austrian Southern Railway ( Vienna - Trieste ).

At the end of the 19th and beginning of the 20th century, Cilli was a center of nationalist conflicts between Germans and Slovenes . In 1895 Slovenian was first taught at a secondary school in Cilli. The 1880 census showed 73.6 percent of the Cillier population to be German. On May 15, 1907, the German House , built in 1906 by Peter Paul Brang (1852–1925), was opened in which German associations and companies had their headquarters. The city was connected to the telephone network in 1902 and to the electricity network in 1913 .

In 1918 Celje, like all of Lower Styria, which is predominantly inhabited by Slovenes, came to the newly founded Kingdom of Serbs, Croats and Slovenes , since 1929 Yugoslavia . The German House was expropriated in 1919 and was named Celjski dom ("Cillier House"). In the period after 1919 industrialization continued, and the population grew from 7,750 in 1924 to around 20,000 before the start of World War II .

The Wehrmacht occupied Celje at the beginning of their invasion of Yugoslavia in April 1941. The Gestapo came on April 16, 1941 and took over the Stari pisker prison , which was inspected three days later by Reichsführer SS Heinrich Himmler . A total of 374 hostages were shot here by the occupying forces - 100 alone by a Munich reserve police battalion. In 1944 partisans succeeded in freeing over 300 prisoners from this prison. During the Second World War, Cilli was bombed several times by the Allies , with the Narodni dom , built in 1896 and today's town hall, being badly damaged. The total war losses are given as 575. More than 1500 city dwellers were deported to Serbia or the German Reich . About 300 people were detained and about 1,000 people were detained in prisons. Around 600 children were taken from their parents and deported to Germany. A monument by the sculptor Jakob Savinšek ( Vojna in me , war and peace) commemorates this time. There is also a military cemetery in Celje for those who died in the First and Second World Wars . In 1945 the Yugoslav People's Liberation Army reached the city after German military units had surrendered in the surrounding area shortly before the end of the war.

After the end of the war, the internment camp of the same name was operated in the suburb of Teharje (Tüchern) in 1945 and 1946 , in which Slovenian Domobranzen and ethnic Germans were held, of whom around 5000 perished. The non fled German population was out of town sold .

Since Yugoslavia was constituted as a federal republic after the Second World War , Celje had been part of the Yugoslav republic of Slovenia since 1945.

Slovenia gained independence in 1991 and joined the European Union on May 1, 2004. In 2006, a diocese of Celje was set up again as a suffragan diocese of the Archdiocese of Maribor . The churches and properties could be renovated and were largely opened to tourism. A museum has been set up in Cilli Castle. 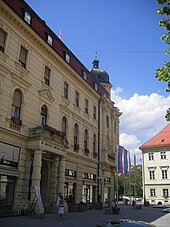 Celje is on the Spielfeld-Straß-Trieste railway line . The Maribor – Ljubljana motorway runs north past the city area, which merges into the Pyhrn motorway at the Austrian border .

Celje is twinned with the German cities of Grevenbroich and Singen (since 1989).

(The following personalities were born in Celje. They are listed chronologically according to year of birth. Whether or not they later had their sphere of activity in Celje is irrelevant.)

Cities and municipalities in the Savinjska region