Cathedral and Michaeliskirche in Hildesheim

The cathedral and Michaeliskirche in Hildesheim have had the status of a UNESCO World Heritage Site since 1985 as an "exceptional testimony to religious art in the Holy Roman Empire" .

Togetherness of both churches

The Mariendom and the former St. Michael monastery church are connected by the person of Bishop Bernward von Hildesheim . This was an educator and advisor to Otto III. On a trip to Italy he got to know ancient works of art, in the heartland of the Ottonian Empire, according to his will, comparable buildings and art treasures were to be built. This is particularly evident in the Christ column, which is in the tradition of Roman triumphal columns.

St. Michael is a founding of Bernwards; he consecrated the church, joined the convent at the end of his life, and his grave is still in the crypt to this day. A cathedral already existed in Hildesheim before Bernward took office, but today's church building goes back to a new building by Bishop Hezilo , so it did not exist during Bernward's lifetime. Today there are two masterpieces of bronze casting, which Bernward commissioned, with the Bernward door and the Christ column.

During the bombing of Hildesheim (March 22, 1945), both churches were severely damaged, while the inventory that had been moved out remained undamaged. Only 30% of the structure of St. Michael has been preserved. Bombs destroyed the Romanesque cathedral with the exception of the Laurentius Chapel and the crypt. When it was rebuilt, it was re-listed on the foundation walls "to simplify the interior". So the churches you see today are reconstruction buildings from the post-war period. Incidentally, this contributes to the uniform spatial impression of St. Michael as a pre-Romanesque church, because before the destruction, the interior also had Gothic elements that were left out during the restoration, which was only completed in 1960: the west transept was vaulted, there were tracery windows. In addition, elements removed during the Baroque period were restored.

The Hildesheim World Heritage is characterized by the World Heritage Center as follows: "In the reconstruction after 1945 and in all subsequent repairs and restorations, the most important goal was to recreate the medieval appearance of both buildings according to the latest scientific standards ." UNESCO is seen as authentic and given the status of a World Heritage Site is more common. Examples are the Abu Simbel Temple , Mostar Bridge and Warsaw's Old Town . 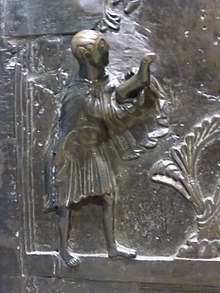 Bernward door in Hildesheim Cathedral. Abel is represented here as a type of Christ: "Like Christ himself, he appears as a victim and sacrifice in one person."

Detail of the Hezilo chandelier: a tower of the heavenly Jerusalem

The Bernward door and the Christ column , today in the cathedral, are major works of Ottonian art. Both were originally intended for St. Michael.

According to the German UNESCO Commission, the painted wooden ceiling in St. Michaelis is "one of two surviving examples of such extremely fragile structures."

This criterion is fulfilled by the Michaeliskirche, which shows a "convincingly clear room concept", which anticipates the characteristics of the early Romanesque . Along with St. Cyriakus in Gernrode, it is the most important Ottonian church building that is still partially preserved. It is a west-facing, flat-roofed basilica with two choirs, three aisles and two transepts. It has a total of four towers, two in the upper part round stair towers on the transepts and two crossing towers. The architectural model for this demanding building was the Carolingian Cologne Cathedral . The effect of the interior is enlivened by the Saxon change of columns and the different colored stones of the arches.

Most of the works of art that are labeled with this criterion are in the Mariendom. During the cathedral renovation, which was completed in 2014, great importance was attached to positioning it in the best possible location in the church. The Hezilo candlestick , which represents the heavenly Jerusalem , hangs in the nave again.

The churches in the context of the city 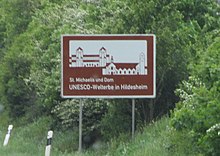 Information board on the A 7

When enrolling, the focus was on the importance of the individual late Ttonian and Romanesque artworks; both churches complemented each other because of their spatial proximity and the fact that they were built quickly.

In 1985, no one considered declaring the two nearby churches to be a joint World Heritage zone, because the adjacent residential buildings had been largely destroyed by the bombing in 1945, so that today the cathedral and St. Michael are like historical islands of modern architecture, rectangular buildings of up to five storeys high. But since the churches were both built on hills, they continue to shape the cityscape. The medieval city layout can also still be seen in the course of the streets.

The German authorities proposed in 2008 and approved by ICOMOS to create a buffer zone of 157.68 hectares around both churches, which corresponds to the area of ​​the medieval city. This includes the Stift zum Heiligen Kreuz and St. Godehard . It becomes understandable that the cathedral stands in the center of a cross made up of four churches (St. Michael, St. Godehard, the Holy Cross Church and St. Bartholomew) - a Hildesheim "church crown." Historic building fabric that is contemporary with the world heritage should be identified and specially protected. Future construction measures in the old town should be in line with the world heritage status, in particular the “visual integrity” of the cathedral and St. Michael should be preserved.

Commons : Cathedral and Michaeliskirche in Hildesheim  - collection of pictures, videos and audio files