This article describes the Speicherstadt in Hamburg. Quarters with the same name in different cities are listed under Speicherstadt (disambiguation) . 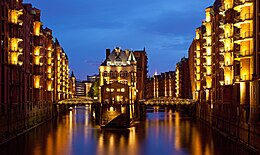 Speicherstadt seen from the east; in the middle: “ Wasserschloss ” at the confluence of the Wandrahms- and Holländischbrookfleet; right: the Zollkanal as a demarcation to the old town; below: the Teerhof with the customs building and the Poggenmühlenbrücke

The Hamburg warehouse district is the world's largest historical warehouse complex , located in the port of Hamburg . It covers the area between Baumwall and Oberhafen . It has been a listed building since 1991 and has been on the UNESCO World Heritage List with the neighboring Kontorhausviertel under the name Speicherstadt and Kontorhausviertel with Chilehaus since July 5, 2015 .

The Speicherstadt was built between 1883 and 1927 south of the old town on the former Elbe islands and residential areas of Kehrwieder and Wandrahm as part of the Hamburg free port in three sections, the first section was completed in 1888. The chief engineer of the Hamburg construction deputation, Franz Andreas Meyer, was in charge of construction . He was assisted by the hydraulic engineering director Christian Nehls and the building director Carl Johann Christian Zimmermann as well as a consortium of 15 engineers, 24 architects and draftsmen. Georg Thielen designed around 30 of these at the Neuer Wandrahm , Am Sandtorkai , Auf dem Sande , Brook and Kehrwieder locations .

Since January 1, 2003, the Speicherstadt has been removed from the area of ​​the free port (which was dissolved in 2013) ; on March 1, 2008 it was declared under administrative law with the new construction area on the Großer Grasbrook to be the HafenCity district in the Hamburg-Mitte district .

The Speicherstadt stands on the approximately 26 hectare area (including the canal) of the former Elbe islands Kehrwieder and Wandrahm, over a length of about 1.5 kilometers and 150 to 250 meters wide in the north-eastern Hamburg harbor . It stretches from the Kehrwiederspitze and the Sandtorhöft in the west to the former Teerhof at the Oberbaumbrücke in the east. It will use six canals criss-crossed:

Kehrwiederfleet
begins between the Kehrwiederspitze and the Sandtorhöft, runs to the sand bridge (Auf dem Sande) and there goes over into the Brooksfleet
Brooksfleet
is the extension of the Kehrwiederfleet from Sandbrücke (Auf dem Sande), runs to the confluence of the Kleiner Fleet at the Neuerwegsbrücke and there it merges into the St. Annenfleet
St. Annenfleet
runs parallel to the street Am St. Annenufer , between Neuerwegbrücke and St. Annenbrücke, it is the extension of the Brooksfleet and merges into the Holländischbrookfleet
Dutch brookfleet
Extension of the St. Annenfleet from the St. Annenbrücke to the confluence with the Wandrahmsfleet in front of the Poggenmühlenbrücke
Small fleet
Connecting Fleet between Zollkanal , Wandrahmsfleet and Brooksfleet in the transition to St. Annenfleet
Wall cream fleet
runs from the Kleiner Fleet (Kannengießerortbrücke), flows in front of the Poggenmühlenbrücke with the Holländischbrookfleet to the Zollkanal at the level of the Oberbaumbrücke

The Speicherstadt is separated from the old town center by the former Dat Deep waterway , formed by the inland port , the customs canal and the upper port , and in turn connected by eight bridges. To the south it is separated from the old port area and the current urban development project of various HafenCity districts by the streets Am Sandtorkai , Brooktorkai and Oberbaumbrücke . This street course corresponds roughly to the old Hamburg fortifications , whose upstream city moat was converted into the harbor basins of the Sandtorhafen , the Brooktorhafen and the Ericusgraben during the port development .

With the establishment of the Empire in 1871, Hamburg became a federal state of the German Empire . Hamburg's national territory was a customs exclusion zone at the time . In the customs connection agreement of 1881, Hamburg and the German Empire agreed to build a free port to enable the city to join the German Customs Union . In order not to burden trade in the port with tariffs, it became necessary to create an area that, as a free port, did not belong to the German customs area. In this enclave , the traditional privilege of Hamburg merchants should continue to apply to be allowed to store, refine and process imported goods duty-free. When Hamburg joined the German Customs Union in 1888, the first section of the Speicherstadt was opened as a free port area on schedule.

The Hamburg warehouses around 1900;
Stereoscopy No. 802 by Knackstedt & Näther

The Sandtorhafen (first row of sheds Sandtorquai)
with the Speicherstadt around 1898
Towers (from left to right): the new town hall , St. Nikolai , St. Petri , St. Jakobi and St. Katharinen

Construction of the Speicherstadt began in 1883. The residential quarters that had grown on the Elbe islands of Kehrwieder and Wandrahm from the 16th century onwards were demolished.

“On behalf of the Hamburg Building Deputation”, Georg Koppmann created numerous photo documents of historically significant houses, streets, squares and canals that “were to fall victim to the renovation of the free port area”.

The Kehrwieder was regarded as a workers' and craftsmen's quarter with partially narrow buildings like the Gängeviertel . The wall frame was mainly built up with merchant and town houses from the 17th and 18th centuries and influenced by Dutch immigrants. About 20,000 people were forcibly relocated. Many came to the working-class neighborhoods in Barmbek and Hammerbrook , which had been built up within a few years ; others converted their summer houses on the Alster or Elbe into main residences. 1,100 houses were laid down. The first director of the Hamburger Kunsthalle , Alfred Lichtwark , coined the term “Free and Demolished Hamburg” on this occasion.

In 1888, the inauguration of the Speicherstadt took place with the ceremonial laying of the keystone by Kaiser Wilhelm II . In 1898, two thirds of the construction project was completed. Further construction work in the eastern part was completed before the start of the First World War in 1914. The Speicherstadt originally consisted of 17, now 15, warehouse complexes, which are numbered alphabetically as blocks from A – X, omitting F, I. Blocks Y and Z, which were intended for the Ericusspitze, were no longer built.

The realization and administration of the Speicherstadt was taken over in 1885 by the Hamburger Freihafen-Lagerhaus-Gesellschaft (HFLG). It was set up as a stock corporation from the very beginning: the city contributed the property of 30,000 square meters and the Norddeutsche Bank the share capital of nine million marks . A fund was set up from the dividend , with which the city bought the shares in the bank. From 1927 the city of Hamburg was the sole shareholder. The place of business was the so-called Speicherstadttrathaus on St. Annenufer, which was completed in 1902 and which, with its neo-renaissance style, stands out from the brick Gothic - style warehouse buildings. Hamburger Hafen und Logistik AG (HHLA) emerged from HFLG .

During the Second World War , about half of the building was destroyed by the Allied air raids (→  Operation Gomorrah ). The reconstruction after the war, largely true to the original, was completed in 1967.

Due to the increase in container handling and the associated relocation of the transshipment points as well as automated warehouse management systems that enable the registration of duty-unpaid goods at every location, the free port status of the Speicherstadt has become dispensable.

In 2003, the free port limit has been laid and the first area Kehrwieder taken out of the Free Zone. The entire area of ​​the Speicherstadt has been outside the free port since 2004 and is therefore - with the exception of the numerous carpet stores - inland under customs law. The customs border initially ran further south just before the Hamburg Elbe bridges and was completely abolished in 2013. This relocation served in preparation for the construction of HafenCity , which also includes the historic Speicherstadt. 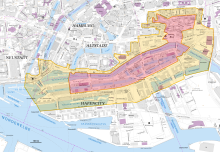 On July 5, 2015, the Speicherstadt and Kontorhausviertel with Chilehaus were included in the list of world cultural heritage at the 39th session of the UNESCO World Heritage Committee in Bonn .

The warehouses ( storehouses ) in neo-Gothic brick architecture are founded on thousands of oak piles and each have a connection to the water ( Fleet ) on one side and to the street on the other. General cargo and above all coffee , tea and spices were stored on five “floors” (floors) one above the other and accessible via a separate winch mounted on the house gable. In the warehouses, which were mostly unheated and had wooden floors, the storage conditions were relatively uniform.

Cross section through the Speicherstadt

Historical and current use

The storage, possibly also further processing, was taken over by the local people for the importers , who did not have their own warehouses. The quarter people were mostly specialized in certain goods and had in-depth expertise. In the case of tea and coffee in particular, the imported varieties were tasted and blends were prepared. Their tasks still include checking the quality of the goods and sending samples. As a result of the rationalization of overseas trade, however, the companies have moved closer to the container terminals .

The Speicherstadt is located in an area that can be flooded by the Elbe water in the event of a storm surge , which means that the lower floor is not suitable for storage and is only used for shipping preparations.

Today, the floor space of the Speicherstadt is around 630,000 square meters and, in addition to numerous carpet dealers and agencies, it houses various museums such as the Speicherstadtmuseum , the Customs Museum and the Spice Museum . The largest model railway in the world, the Miniatur Wunderland , has also been housed here since 2000, as has the Hamburg Dungeon . The publishing house and editorial staff of the Mare magazine are based in Sandtorquaihof on Pickhuben Street . The Hamburg Port Authority (HPA) has been located on Neuen Wandrahm since 2006 , and emerged in 2005 from the former Office for Electricity and Port Construction of the City of Hamburg.

Due to the canals and the waterway delimitation to the old town, the Speicherstadt with 20 bridges has a high proportion of various overpasses, 14 of which are listed:

Bridges from the old town to the warehouse district: 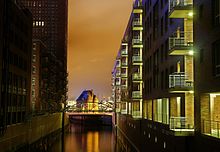 View from Kehrwiederfleet over the Wilhelminenbrücke to the Alte Wache

Bridges between Speicherstadt and the former port area:

The memory city is from Hamburg central station with the line U1 ( station Meßberg ), the U-web - U3 ( station Baumwall ) or U4 line ( station Überseequartier ) to reach. From the water side they can in high water while harbor cruises with barges are avoided. Larger tour boats cannot operate in the flat canals and under the low bridges.

Today, a large number of tourist attractions are housed in the Speicherstadt:

Wikisource: Law relating to the connection of the Free and Hanseatic City of Hamburg to the German customs area. 16 February 1882.  - Sources and full texts