This article describes moats in northern Germany, for other meanings see Fleet (disambiguation) .

Fleet on the Dutch Row 1883 (before the Speicherstadt was built) 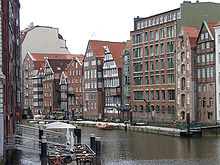 Nikolaifleet at low tide at the Trostbrücke in Hamburg's old town

A Fleet ( listen ? / I ) ( n , also Fleth as well as occurring in many other spellings; from and. Fliot , mnd. Vlêt , vlît , nnd. Fleet , hd. Fließ , to flow ) was the name of a natural watercourse in the Elbmarschen , which flowed into the Elbe or one of its tributaries. The same applies to the Wesermarschen . Canals in this sense have mostly disappeared due to the dike in the marshes in the Middle Ages or have at least been greatly changed; Often only place names such as B. Bahren- , bars- , Beiden- , Bors- , dams , ELS or Wewelsfleth . Today, the North German name Fleet stands primarily for the still existing, but heavily changed or artificially created water connections in Hamburg , Glückstadt and Bremen .

Hamburg 1813: The canals are not yet filled in

In Hamburg, the different spellings such as Fleth , Flet or Fleet were standardized by a Senate resolution of September 27, 1946; the spelling Fleet was chosen . It was published in the Law and Ordinance Gazette and thus became valid on January 15, 1947.

The Hamburg canals arose partly from the estuary arms of the Alster and Bille into the Elbe, which were then used for drainage and as city ​​ditches for defense; on the other hand, they were created as further overflow ditches of the later dammed Alster. After all, the canals were increasingly used for the movement of goods .

In contrast to an artificially created canal , the water level in Hamburg's canals was initially not regulated by sluices , but fluctuated with the tide , which led to silt deposits , which the Fleetenkieker ( flat German: Kieker "peeper") profession was tasked with removing . From 1555 onwards, Fleetenkieker had to ensure that the barges and barges had sufficient water depth on behalf of the Düpe Commission ( Plattdt . Düpe "depth") . Later, the name was passed on to all people who searched the canals and their banks for usable waste.

The most famous canals can be found in Hamburg's old town : the interconnected Alster canals , which also represent the historically changing connections between the Alster and the Lower Elbe .

Here the houses of the wealthy merchants - mostly residential, office and warehouse at the same time - were built with the rear facing the canal and the front facing the street, often on both sides with appropriate lifting devices for loads. The cargoes of the ocean-going vessels were initially transferred to smaller barges and brought to their destination via the canals for intermediate storage or further processing. For further dispatch, the goods were later returned by water or laboriously over land.

The canal waterways thus formed an important transport network for the transport of goods. They were also used to remove water and to dispose of faeces and rubbish, which resulted in a corresponding odor development and hygienic problems. As part of renovation measures, smaller or less usable canals of the up to 29 canals were filled in as early as the 19th century, especially after the Hamburg fire , but also after the Second World War to remove the rubble from the houses destroyed by bombs and as part of road expansion .

The canals (and canals in the area of ​​the Bille) opposite the Elbe can be shut off with locks for flood protection after the bad experiences from the storm surge in 1962 . The Nikolaifleet , at the back of Grimm, Catherine Street, as well as the Cremon Deichstraße located and still directly connected to the same falls at low tide usually dry, but can be protected at too high of accumulated flood.

The Alsterfleet and the Herrengrabenfleet connected to it are constantly kept at a minimum water level by the Alster locks due to their navigability. These are the Schaartorschleuse (under the Schaartorbrücke, at the old orphanage) and the Rathausschleuse on Reesendamm / Rathausmarkt (under the Schleusenbrücke).

The Herrengrabenfleet and the Bleichenfleet on the one hand and the Alsterfleet on the other hand include the so-called Fleetinsel , and the border between the old town and the new town also runs here .

Outside the city center

Mönkedammfleet with subway ramp of the U3 Ring line

In Bremen there are several, some smaller watercourses that Fleet are called. They usually represent the main drainage ditches of their respective drainage systems.

See also : List of waters in the Free Hanseatic City of Bremen