Lagerhaus is a redirect to this article. See also: warehouse (disambiguation) . 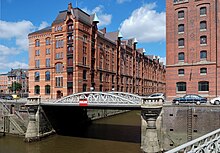 A soil storage (including storage , warehouse , packing house , granary , Fruchthaus or fruit box ) is a building for storage of goods . It has a similar function to the barn , but it is part of a farm or estate . 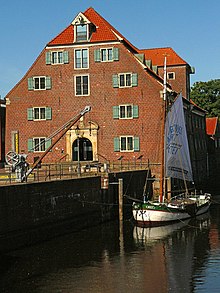 Schwedenspeicher on the Schwinge in Stade with Ewer in the foreground.

In almost all medieval cities , there were grain or grain storage (often in southern Germany as a fruit box or Zehntscheuer called). The massive buildings often stood in the town center near the market . Since good transport connections were also essential, storage facilities were mostly accessible both by land and by water . They were often set up at the port of a city to enable the transport of larger quantities of goods by ship . If the storage systems are still preserved, they are usually used for other purposes today. So was the former business center of the Hanseatic city of Stade , the old Hanseatic port on the rocker , in the period of Swedish occupation of Schwedenspeicher built. It was built in brick as a baroque secular building from the second half of the 17th century and has served as a regional museum since the 1970s . 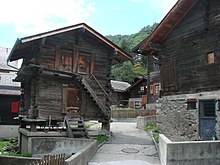 In Switzerland you can find the granary called Spycher (y = long i) or Spicher v. a. in Valais , but also in the other mountain cantons. It was built very carefully so as not to let the property get damp, and is therefore easy to distinguish from the barn (hay store). Sausages and dried meat were also kept in it. A Spycher in the figurative sense is the Valais Spycher: Leuk Literature Prize , in which intellectual property is stored for a longer period of time. In his novel Anne Bäbi Jowäger (1843), Jeremias Gotthelf describes the Spycher as follows:

“The Spycher is the great treasure trove in a farmhouse, which is why it usually stands a little apart from the house, so that if it catches fire, that one can still be saved, and when the house comes on, the farmer yells: 'Rescue the Spycher, su does ds angere nit sövli. ' It contains not only grain, meat, carvings, clothes, money, supplies of cloth and thread, but also writings and jewels; he would almost like to be called the heart of a peasantry. Therefore, if thieves want to steal, they break into the Spycher, not into the house… Just as the king does not let the people into his treasury, but only the treasurer, […] only the farmer and treasurer go into the Spycher the farmer's wife."

An example of a non-European storage facility is the Alhóndiga de Granaditas, built in Guanajuato , Mexico in 1808 . The classical- style building was used to store grain from all over the region to ensure the city's food supply. In 1810 the fortress-like Alhóndiga de Granaditas was the scene of the first battle in the Mexican War of Independence .

Typically, the storey has a floor height of 2.80 to 3 m, and the ground floor is constructed in such a way that it can be easily accessed or approached by vehicles. Often a loading ramp or a loading device is included in order to be able to load and unload vehicles or ships. The surrounding wall is massive and has numerous small windows, which for security reasons are often no larger than 20 cm × 25 cm. The interior construction is fire-proof and, in the case of multi-storey construction, supported by freight elevators .

The construction of storage facilities has become particularly important in port cities, for example in Hamburg's Speicherstadt .