from Wikipedia, the free encyclopedia
This is the spotted version , flagged on December 20, 2018 . There are 2 pending changes that have yet to be viewed.

The importance of Wolfshagen results from the ensemble of buildings that characterize the village with numerous listed objects that were built by the Counts of Schwerin . The Wolfshagen Castle was in 1724 under Jean de Bodt built. Most of the 38 monuments were built by the family in the course of a planned expansion of their former village from 1830. As a rural town, Wolfshagen has the greatest density of monuments in the entire Uckermark district and, with its unique ensemble of monuments, ranks among ten other buildings in Brandenburg as a cultural monument of particular national cultural importance.

The most important objects include the neo-Gothic church , which was built between 1850 and 1858, and the King's Column, the only monument in Germany dedicated to the Stein-Hardenberg reforms . Other objects under monument protection are the castle ruins of the Blankenburg with the fangel tower, the gate of honor, the hereditary burial , the memorial for the wars of liberation and the tile bridge.

Many of today's residential buildings, such as the former Prussian customs house or the gardener's and fisherman's house, were built using the neo-Gothic field stone and brick construction . Gothic pointed arches made of brick, round windows, rosettes and rounded roofs (so-called "plank roofs") are particularly characteristic.

Wolfshagener Park was laid out at the beginning of the 19th century according to plans by Peter Joseph Lenné , taking into account existing and yet to be constructed buildings, so the village was part of the park. A number of originally planned lines of sight can now be experienced again. 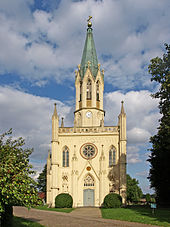 Wolfhagen's development began in the 13th century when German colonists settled the area around what is now the Haussee. The first written mention of the place comes from the year 1292. On the island in the Haussee the construction of a castle started as early as 1250, on which the family von Blankenburg had their seat. This castle gained strategic importance at the end of the 13th century because it was on the border between Mecklenburg and the Mark Brandenburg . In the late Middle Ages, Wolfhagen's affiliation therefore often changed between these two domains. Around 1635, during the Thirty Years' War , the Blankenburg was destroyed and not rebuilt.

When the von Blankenburg family had to sell their properties in Wolfshagen due to their difficult financial situation, Baron Otto von Schwerin (1616–1679) acquired the property in 1652 and made Wolfshagen the headquarters. Between 1727 and 1738 his grandson Count Otto Schwerin (1684–1755) built a baroque palace on the site of the old Renaissance palace. At the end of the 18th century there were 252 inhabitants in the Wolfshagen estate. In the 19th century, under Count Hermann von Schwerin (1776-1858) , Wolfshagen was given the townscape that still dominates today, with the landscape park designed by Peter Joseph Lenné. By the end of the 19th century, not only were representative buildings built, but also numerous farm workers' cottages . This high-contrast building ensemble was preserved until the end of the Second World War . In the last weeks of the war, the Wolfshagen Castle, which the Wehrmacht used as a warehouse, was destroyed. The park was preserved and is today a dendrological and horticultural treasure.

Between 1947 and 1964, 21 new farms were built. Three apartment blocks that were built between 1961 and 1964 do not harmonize with the buildings of the 19th century. The expansion of the B 198 (then F 198) in the early 1980s was a major intervention. Some buildings were demolished and the royal column was separated from the park. In 1983 the construction of a cottage settlement began. 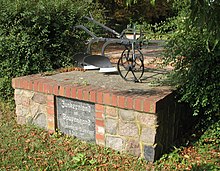 On the 40th anniversary of the land reform in 1985, a memorial was inaugurated in the center of the village with the inscription "Junkernland [sic] in peasant hands". Since the peasants' liberation of 1807 was part of the Stein-Hardenberg reforms , the land reform monument thematically fits the royal column. Since the reunification, it has been criticized by associations of victims who are trying to rededicate it from the winner's perspective to the victim's perspective. In July 2004 a commemoration ceremony was held to commemorate the expulsion and discrimination of the dispossessed.

From 1997 to 2002 the listed village ensemble was extensively renovated as part of the village renewal program .

The two smaller villages Amalienhof and Ottenhagen were first mentioned in documents in 1740 and 1734.

Commons : Wolfshagen (Uckermark)  - Collection of images, videos and audio files
Districts of the municipality of Uckerland