Under Village Renewal refers to government-sponsored programs that support the construction, traffic engineering and cultural conditions in villages to improve.

Logo of the ARGE village renewal

Individual countries have already carried out national campaigns, which is why the European ARGE Land Development and Village Renewal was founded in 1989 . The association sees itself as an unbureaucratic association of politicians, experts and scientists. The ARGE is based in Vienna . Until 2006, the ARGE worked as a platform for the Austrian Eco-Social Forum .

In November 2006, the ARGE was founded as an independent association with its own legal personality. Since 2009, the association has received support from the Europe for Citizens program of the European Commission's Directorate-General for Education and Culture .

The current chairman is the Governor of Lower Austria, Erwin Pröll .

19 European member countries and regions are members of the ARGE. Switzerland has been a member since 2008. The Lower Silesian Voivodeship joined in 2009 .

In order to create an incentive, the ARGE awards the European Village Renewal Award, which has been awarded every two years since 1990.

In Germany, the architect and professor Wilhelm Landicket is known as the “father of village renewal”.

Monument from 2010 for the village renewal in Engelbrechtsmünster 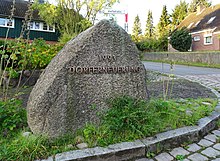 Memorial stone from 1993 for the village renewal in Döhnsdorf

Village renewals are carried out on the basis of the village renewal guidelines adopted by the federal states.

The general objectives of village renewal are set out in the text of the guidelines, for example in Lower Saxony :

“The promotion of village renewal is part of the state's structural policy for rural areas and the rural areas of regulatory areas. It should enable the communities and their citizens to preserve the unmistakable character of rural settlements, which are characterized by socio-economic, structural-spatial, ecological and cultural values, and to adapt the villages as living, working, social and cultural areas to future requirements. "

The money used in village renewal comes from state, federal and EU funds.

The funding should (also in Lower Saxony, for example):

The sequence and focus within the aforementioned list of the goals of village renewal show that in Lower Saxony, in particular, the agricultural and forestry operations are being moved into the core area of ​​interest. Their position in the village is to be secured and developed as a matter of priority. But the other aspects of village development, such as general economic development, the development of the village as a place to live, maintenance of the townscape and village ecology, should also be the subject of village renewal.

In Hesse, the focus is more on the conversion of formerly agricultural buildings, with the maintenance and creation of jobs playing an important role in addition to the creation of living space.

A distinction must be made in the village renewal programs between the promotion of communal and private measures. In the case of municipal measures in Hesse, special emphasis is placed on ensuring that they are developed together with all local population groups. In particular, measures should be promoted that provide for internal development (building in the center of the town) before external development (new development areas) and that take demographic development into account; d. This means that an attempt should be made to keep the villages liveable for all age groups.

The basis for promoting village renewal in accordance with the village renewal guidelines of the respective federal states is a village renewal plan, which shows the development goals for the planning area and the measures required for implementation in text and map.

The village renewal plan is a local development concept that is intended to provide an overview of future planning and action in the village, and which specifies the time and financial framework for the planned measures. The village renewal plan is to be drawn up by the municipalities. Intensive participation of the resident citizens and property owners is sought. The public interest bodies , the villagers and other claimants are to be involved in the planning in an appropriate manner.

In Austria, the idea of ​​village renewal began to gain a foothold in the federal states in the late 1980s. Since spatial development is also the responsibility of the federal states here , village renewal is also organized at the state level , similar to the urban renewal that begins later . Lower Austria played a leading role in this area . The village development programs run throughout Austria as part of the Local Agenda 21 and the LEADER programs.

The programs and institutions of the countries are:

The Austrian Sustainability Portal of the Ministry of Life looks after the affairs at the federal level .