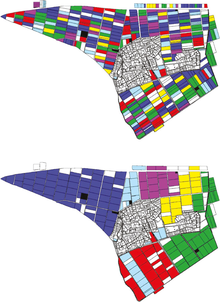 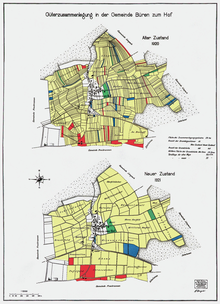 The corresponding procedure for building areas is called reallocation in Germany .

Land consolidations are also used to achieve the following goals:

Favoring the arrangement are the wish of a majority of the landowners for structural improvement (splinter ownership) combined with ecological added value or ecological projects, processes with support of the energy transition or processes with the possibility of better implementation of cross-community development concepts.

Are involved in the process or the land consolidation measures

In order to be able to settle each participant with land or money of the same value, the value of the old property, the so-called throw-in mass, must be determined. The value of a property is then determined in relation to the total value. The current value of the throw-in mass is determined with the help of the soil estimation results , which depend, for example, on the quality of the soil and its location. These soil appraisal results are expressed in numerical values ​​(ratios). Properties with a particular impact on value (developed properties, etc.) are determined separately according to their market value , but only in the event of a change of ownership.

The land reorganization in the forest represents a special case. There, the soil and the growing wood stock are assessed separately. The soil value is based on the one hand on the usual forest soil values ​​(see standard soil values), on the other hand on location, inclination and exposure, bedrock, soil, water and nutrient supply and manageability. The growing wood stock is assessed separately from this. Its value essentially depends on the existing tree species, the customary culture costs and wood prices of the various types of wood, assortments and wood qualities as well as their processing costs. The market values ​​of the crops (culture cost value), poles and tree timbers (stand expectation value) and old stands (output value) are determined.

Redesign of the land consolidation area

The area should be designed in such a way that it offers the greatest possible benefit for those involved and the general public. For this purpose, paths and facilities that can be used jointly are created, soil improvement measures ( melioration ) are carried out and the landscape is designed according to the requirements of spatial planning and regional planning. The roads (communal facilities) are then mostly in community ownership and are financed by the increase in value or the road contribution. In between, the parcels are cut in such a way that the property is as uniform as possible in terms of location, shape and size.

In recent years, more attention has been paid to environmental protection measures, in some cases these are even in the foreground.

Criticism of the land consolidation

In the opinion of critics, land consolidations also have negative effects: the emergence of monocultures, desertification of the landscape, erosion, loss of biodiversity through clearing of hedges , destruction of strips of field margins or channeling of brooks ( alluvial forest ) as well as the subsequent conventional land use .

In addition to biological consequences, cultural losses also often occur: the destruction of historical routes, the loss of small monuments (e.g. hall crosses or chapels, historical enclosures, etc.), the destruction of soil monuments or, in general, the loss of historical cultural landscape , although there are also overlaps on issues of Conservation of nature exist (for example when clearing orchards, which represent a historical form of economy, but at the same time also have high ecological value).