Thatched-roof cottage from the 19th century on Twedter Plack in Flensburg - Mürwik , a cultural monument of the district .

Kate or Kotten was the name of a single simple house or workshop in or outside of the village community. Most of them were inhabited by köttern , whose right of residence represented a form of deputate wage .

Kotten - also Kot , Kote , Kotte or Kate , Katte , Katten - means “hut”, “little house” in Middle Low German . There are also other forms with th : Koth , Kothe , Köth , Köthe , Köthen , Kathe . The word can be found in all three genders, but is mostly female in the form of Kate / Kote and mostly male in the form of Kotten . In the Harz the Köhlerhütte is called Kote .

In a more general sense, it means regionally a simple - disparagingly poor - house (or place of work).

In his dissertation on the history of the Börde Selsingen, the historian Michael Ehrhardt also dealt with the question of when a homestead was called 'Kate'. He concluded that there was a certain breadth of meaning. Clearly, however, a cottage was smaller than a full yard or half yard in terms of the extent of the land, the size and number of buildings and also the extent of the Meier duties.

A linguistic relationship with hut , house , Gaden and Latin casa is assumed in a general meaning "enclosed space", "shed" or "covered space", the English word cottage is also related.

Related words refer to small buildings in other languages, such as Chata in Poland and the Czech Republic and Kote for the traditional Sami hut in Lapland.

The word Kohte for the Horde tent scout movement may be a new creation, equally an archaism and neologism .

Two cottages on a former farm in East Westphalia that have been converted into residential buildings; There is also a cemetery for the full farmer on the property

The type of settlement called Kottens dates back to the Middle Ages . Initially, in the High Middle Ages, when unpopulated areas were conquered, there was still enough cleared land for individual full farms ( hooves ). Subsequently, the Kotten emerged when the original courtyards were no longer sufficient due to the increasing population and smaller splits were created. In the case of inheritance divisions , full farms were divided among the heirs, who then often set up several individual cottages on the original farmland. A second wave of settlements, in which many Kotten / Katen were created in close proximity, was observed in the Oldenburger Land around 1600 .

In the late Middle Ages and the early modern period , documents increasingly differentiated between full courtyards and kotten / katen. A Kotten / Kate was a farm with a smaller size and lower tax burden. In contrast to the Hufe of the full farmer ( Hufner ), he was usually only equipped with a small piece of land for self-sufficiency and sideline agriculture . The residents (Kätner, Kötner, Kötter , Kotsasse or also known as mutters) belonged to the lower village middle class and usually had another main occupation.

Often there were several Kotten / Katen on the property of the large farmer. Such a collection of settlement areas below the village level without their own social facilities such as a church, school or inn is called a hamlet or farmyard , depending on the region .

In some areas, for example in the Bergisches Land , people spoke of kotten when the houses were small and poor. Most of them were one and a half storeys high with a living room that doubled as a kitchen. From here, a narrow wooden staircase led to the bedroom in the attic. When industrialization began in the second half of the 19th century , simple workers and miners lived in such cottages. 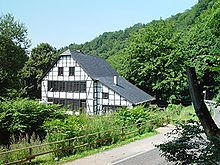 In the pre-industrial and early industrial times, rural buildings were also called Kotten, which were used to manufacture or process goods. Compare, for example, the expression Salzkot or the corresponding place name Salzkotten , which originally referred to a brewhouse . The activity of the Kotten / Kätners determined the location and equipment of the Kotten / Kate. There were Weber's cottages, craftsmen's cottages, wayman's cottages on the Chausseen (see also Hellweg ) and (loft) tree cottages at the customs offices.

In the Bergisches Land in particular , the regional form of hammer and grinding kotten or Slipkoten is a grinding workshop that has been working with the help of water power since the late 14th century. The heyday of the Schleifkotten was the 17th century. Today, the Manuelskotten is the only still functional, water-powered Schleifkotten in the Wuppertal urban area, the Wipperkotten double dome system is the last in the Solingen area. There, beginning in the 15th century, kotten were built on the streams and rivers, in which metal , especially iron , was created and processed with the help of water power . By water wheels were bellows , mechanical hammers and grindstones driven. Kotten were also often built as forges away from the watercourses without the support of water power.

Kotten / Katen were built in the late Middle Ages and early modern times in half-timbered construction like a Lower Saxony house ( two- stand house ), but they have fewer stands. So they are shorter, which is an indication of the limited utility value as a full-fledged farm. The Deele extends from gable to gable, the rear living part is omitted. In the north of Germany in the 19th century the construction changed from the half-timbered to the brick cate.

As a rule, the Kotten / Kate did not have a barn or stable building. Kotten / Katen are mostly one-story, the gable room was used as a straw and food store. Animals were housed under the depression of an extended roof side. In regions with cold winters, there was no demarcation between living and animal areas in order to benefit from animal warmth.

The small old-age sharing houses ( moving-out house ) that Hufner built on the property of their farm for their parents who were retiring from working life were a special form .