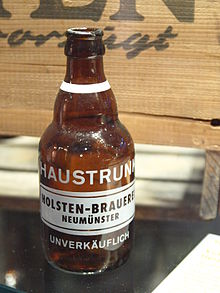 The Deputatlohn (from Latin deputare , "cut") is in the economic one out in kind existing share of the wage or salary .

Until the beginning of the 20th century, farm workers received deputation wages, including free housing, small livestock or the use of fruit and vegetable gardens. Remuneration in kind came from a time when the importance of money as a benchmark was low due to a lack of (preferably local) purchasing sources. Such advantages were important in remote areas where in the 18th and 19th centuries there were no stores or only in-house stores. The employer paid his wage laborer by providing what was already generated in the production process. In some cases, benefits in kind were specified in the employment contract .

The application of deputy wages was severely limited by the truck ban . Nevertheless, discounts or similar forms are still regulated in individual employment contracts.

The name of house fire enables active miners to cover their own needs. Deputatkohle should serve the miners for cooking and heating in their own apartment. Deputated coal was a wage component as a contribution in kind and was laid down in the collective bargaining agreements for the mining industry. “An active buddy is entitled to up to seven tons of coal annually.” The “miner's supply certificate for house fire” (Section 9 (1) sentence 1 BVSG NRW) was issued for a miner's claim. Instead of domestic coals, miners can receive an energy subsidy (“coal money”), since only a few households still use coal for heating. The Gesamtverband Steinkohle and the IG Bergbau, Chemie, Energie signed a collective agreement in 2016, according to which the miners will be supplied with deputate coal from their own production until the end of 2018 (then the German hard coal mining industry) and will be compensated by the energy subsidy from 2019.

In the “hard professions” - such as mining , the glass industry or the brickworks - the drinking alcohol was given as a contribution. The Bergmannsschnaps was a primate liquor diluted to drinkable strength . For this there were separate flavors and additives in drugstores or similar shops that gave the schnapps a taste.

In companies in the beverage industry, their own products were given to employees as a deposit. Mainly to prevent the theft of products, sometimes to prevent resale, specially marked bottles were usually used for delivery. The tax-free or tax-reduced distribution of house drinks to employees is sometimes made in boxes or barrels. "Around four million liters of beer [2010] went to the brewery employees as a house drink". In general, the daily deputate amount is matched to a daily consumption. The form of the house drink - what the employee drinks at home after work - is common in breweries as bottled beer and is also common in distilleries or wineries . In the latter, schnapps or pomace wine are sold as an instant drink or partly as a monthly amount of an inexpensive product variant. The distribution of house drinks in breweries continued through the middle of the 20th century. For the employee, however, it is now considered a pecuniary benefit. The submission is subject to tax regulations, such as evidence to whom and how much is given. In the case of delivery to well operations, the designation was partially transferred to the sales process. Sometimes the house drink is referred to as free drink , a term that was taken up as a sales measure , for example in free beer . In addition, the term “house drink”, with a legal trademark meaning, was used in the sale of special beer brands by breweries. In winemaking, the term house drink also has the meaning: "Wine made from pressed pomace with a high proportion of tannins, which may only be used for the winemaker's own needs." "The beer deputat comes from the time when the brewers still had to work hard and physically quench their thirst with the Pils. In the 1950s they were able to draw barley juice fresh from the barrel with tokens. ”The pomace wine as a house drink has its role primarily in the self-sufficiency of the winemaker.

In the fuel trade and especially in forestry, employees were given the right to use wood as fuel. In coal mining, the entitlement to the annual requirement for briquettes or a corresponding amount of other heating material was part of the purchases. Electricity rights are granted in companies that generate electricity.

In the corresponding production facilities and in the distributing trade, it was customary to grant rights to certain commodities. It is still common today to sell employees in trading houses at reduced prices (employee price) against an entitlement certificate or simply against an employee ID as a successor to the deputation payment. Milk shares are given out in dairies. Withdrawals are sometimes allowed in chocolate factories; for tax reasons, employee sales are discounted .

Deputate wages are part of the remuneration in kind and are a pecuniary benefit that is part of the taxable wages in Germany according to Section 8 (1 ) EStG . Housing, food, goods, services and other benefits in kind that are left at a reduced price are not recognized if the monetary benefit does not exceed EUR 44 per month.