A gate exists when the electrical current through both connections of a gate is opposite ( gate condition ). A two-port is therefore a special form of a (general) quadrupole.

The matrices notation common for linear two-ports goes back to Felix Strecker and Richard Feldtkeller from 1929.

A two-port, on the other hand, is a special case of an n- port (which is also referred to as a multi-port). 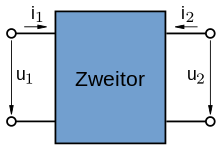 A two-port is a special form of a quadrupole. In the case of a general quadrupole, the gate condition does not have to apply, which means that the two-port parameters shown below and the mathematical description with the aid of matrices can only be used for linear two-ports and not for general quadrupoles.

In older specialist literature in particular, the terms two-port and four-port are used synonymously, although the term four-port is implicitly understood as two-port. The gates of a two-port are often referred to as an entrance and an exit.

The clamping behavior of a linear two-port is described by its transfer function or its frequency response . Two- port equations can be obtained from this , from which two-port parameters for modeling can be obtained.

Two-ports can be identified based on the properties of their clamping behavior, i. H. classify as black box without precise knowledge of its internal structure, as follows:

The transmission factors of linear two-port devices are independent of voltage and current. Therefore, the superposition theorem applies to the gate currents and voltages . A two-port, which consists only of the passive linear components resistor , coil , capacitor and transformer (a so-called RLCM two-port ), is always linear itself.

Non - linear two-port networks are networks with at least one non-linear component and these components themselves, such as diodes or transistors . Their transmission behavior depends essentially on the size of the gate currents and voltages. An approximately linear description is possible by means of the small signal theory with constant characteristic curves and for small amplitudes.

Only linear two-port are the subject of the classical quadrupole and modern multi-port theory. The linear two-port equations and thus the matrix representation of the two-port parameters described below apply only to them.

If no energy is lost in a (passive) two-port because it only contains dummy switching elements, it is called a reactance two-port .

Reversible two-port (also reciprocal , coupling symmetric or transmission symmetric ) have the same transmission behavior in both directions, i.e. H. For example, that the ratio of output current and input voltage does not change when the output is short-circuited if the input and output terminal pairs are swapped. This property is also known as the reciprocity theorem or Kirchhoff's inverse theorem. Thus, a voltage applied to gate 1 generates a current at the short-circuited gate 2 . If the same voltage is also applied to gate 2 , the same current is generated at the short-circuited gate 1. This means if is.

Reciprocal two-ports are fully characterized by three two-port parameters, because the following restrictions then apply to the elements of the two-port equations:

Reversibility is only defined for linear two-port. A two-port, which only consists of the passive linear components resistor, coil, capacitor and transformer (RLCM two-port), is always reversible.

In the case of symmetrical two-ports (also referred to as resistance- symmetrical ) inputs and outputs can be interchanged. This can often be read from the circuit. If this does not apply to a two-port, it is called asymmetrical .

The following applies to the elements of the two-port equations:

A symmetry line can be drawn in the longitudinal direction in the case of two-gate symmetrical or transversely symmetrical. This means that there is no continuous earth line. A typical example is the so-called X-connection of a quadrupole. In contrast, the three-pole terminals used as two-port devices have a continuous earth line and are therefore unbalanced to earth. The property of the ground symmetry has no influence on the two-port parameters. In theory, ideal transformers can be used to convert two-port two-ports balanced to earth into unbalanced ones and vice versa.

If an output variable that changes (due to load) has no influence on an input variable, the two-port is called non - reactive. Reaction-free two-ports are an “extreme case” of irreversible two-ports.

The following restrictions apply to the parameters of a reaction-free two-port:

Circuit to the impedance matrix

For linear two- port , possibly using the symbolic method of alternating current calculation or the Laplace transformation , they transform into a pair of linear equations with four two-port parameters describing the two-port .

Assuming that they exist, these two- port equations can be given in the form of matrix equations. Applied currents and voltages are added to these equations as matrices as required. The specified calculation rules are used to determine the matrices for any known two-port, such as a feedback network of an amplifier circuit .

Conversion of the matrices

The elementary transverse two-port only contains an impedance in the transverse axis of the two-port and does not contain any components in the longitudinal axis.

The Γ-two-port is a synthesis of elementary transverse two-port and elementary longitudinal two-port. It is formed from the chain matrices of the elementary two-port as follows:

The mirrored Γ-two-port is a synthesis of elementary longitudinal two-port and elementary transverse two-port. It is formed from the chain matrices of the elementary two-port as follows:

To simplify calculations, complex two-port circuits can be combined to form simplified circuits using appropriate two-port parameters. The equivalent circuits do not represent a guide for physical implementation.

The T equivalent circuit enables any two-port circuit to be represented using the equivalent impedances. The controlled voltage source is not required for reversible two-port devices. It can be synthesized from an elementary longitudinal two-port and a Γ-two-port or correspondingly from a mirrored Γ-two-port and an elementary longitudinal two-port. The following composition describes the latter:

Moving a two-gate through another.

Chain matrix (A matrix) of simple impedances in chain parameters (not Z parameters; Z is only the name of the impedance here)

It is often helpful to transform one two-port through another. For this, the two ports A and T are given in chain parameters, T is also invertible and should not be changed. When shifted through T, A now becomes A ', so that the behavior of the total second does not change. The following must therefore apply:

The transformer coupling where only the main diagonal of T is occupied and the gyratory coupling where the main diagonal of T is zero play a special role here . Simple impedances can be expressed in chain parameters using the matrices opposite. In the case of transformer or gyratory coupling, A and A 'are one of these two matrices in terms of shape, i.e. a single impedance Z on one side of T can be expressed by a single impedance Z' on the other side. With the gyratory coupling, parallel connections become series connections and vice versa. In this way it is possible to project entire networks through a two-port.

In addition to the characterization of a two-port using the two-port parameters described above, there are also other forms of representation for special purposes. A linear two-port can also be described by so-called scattering parameters . This form of representation is particularly common in the field of high-frequency technology , since the connections of the two-port do not have to be short-circuited or empty, but are usually closed by their wave impedance.

The following relationship exists between the S parameters and the above-mentioned Y parameters of the admittance matrix of a two-port with the wave impedance Z W :

For their application in the theory of filter circuits (wave parameter theory), symmetrical linear two-ports are described by the so-called wave parameters . The two parameters describing the two-port are the wave impedance and the wave transmission factor .

The practical evaluation and processing of the above matrices from complex elements requires the use of computers. The computer-aided numerical evaluation and further processing of the above equations have been reported since the 1970s , and from the 1980s onwards , complex numerical CAD systems (e.g. Super-Compact) gradually gained acceptance in industry. There is no fundamental difference between high-frequency and microwave electronics and electronics at lower frequencies. The linear dependencies between current and voltage are described for all frequencies by the above six quadrupole forms and fully equivalent by s and t parameters (an s parameter chain form), as long as the terms of current and voltage are used as "substitute quantities" instead of electromagnetic fields and other physical terms can be taken. In many cases this is possible up to the microwave range without having to solve the field equations for the electromagnetic fields using a significantly higher amount of computing effort. The transition is always fluid.

Also of interest is the symbolic processing of the above matrix equations and, based on this, the computer-aided formula derivation for signal analysis in linear electronics and high-frequency electronics. A special addition for a mathematics program converts the above eight four-pole parameter representations plus the wave parameter shape and supplements them with numerous other models (active elements such as individual transistors and standard circuits as well as passive elements such as lines, transformers, couplers, directional lines: all with their respective model parameters) symbolically and - so as far as this is logically possible - from any kind to any other kind. The above networking of quadrupoles is largely automated and supplemented by other commands such as B. the deembedding of an embedded quadrupole, the above pushing a quadrupole through another quadrupole, various terminal interchanges et cetera. As a result, the model parameters and / or the quadrupole parameters are dependent on formulas for the usual report sizes, which only appear as numbers in the numerical CAD systems: Formula sets for voltage and current amplification, input and output impedances, reflection factors, gain variables or stability factor up to towards the generalized scattering parameters according to Kurokawa, i.e. for quantities that are standard in numerical systems. Such a system is fascinating and is also very suitable for working out new relationships, developing ideas or proving or refuting assumptions.

Possibilities and limits of the CAD systems

Despite the enormous possibilities, these symbolic as well as numeric CAD systems always remain only arithmetic assistants that always have to be managed with a great deal of expertise, because they consist of mathematical theories, models and many lines of code. The quality of all calculation results always depends on the measurement.