Transformer (also single-phase transformer ) is an inductive component in communications engineering . Constructed similar to a transformer , it differs in that it usually has the same primary and secondary number of windings and its use exclusively for powerless signal transmission.

SMD transformer of the type TG110, as used with Ethernet interfaces. Component from above (left) and from below (right)

Transmitter built into the Ethernet connection

Transformers are u. a. used: 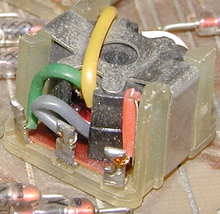 The designs are basically the same as those of transformers for power transmission.

Some of the special features are:

At high frequencies - from the higher short-wave frequencies - often no core made of ferromagnetic material is used for the coils . Such transformers consist of two air-core coils , which are either nested inside one another or axially attached to one another. In the latter design, there are also designs in which the second coil is rotatably arranged, for. B. to adapt the coupling of the two coils to the impedance of the antenna of a detector receiver or radio transmitter.

At even higher frequencies, the two “windings” can also consist of just one parallel wire pair (with and without a core).

Used in transformers bopet each isolated embodiment from 1.3 to 3.6 kV, and only up to 130 ° C resistant. With 5 kV insulation strength, three layers are glued on top of each other. In the case of transformers in switched-mode power supplies, a thermal fuse can be dispensed with, since the line resistance does not adapt and heat up in the event of a short circuit, but rather triggers the upstream fuse. Such transformers only have 19 to 40 turns of the corresponding wire size.

The most important property of transformers is the current or voltage transformation ratio:

= Number of coil turns of the primary winding

= Number of turns of the secondary winding

= Transmission ratio or ratio of the number of turns

Another important characteristic of many signal transmitter is the integral of the voltage over time until the core in saturation falls. It is called the voltage-time area or voltage-time product, also because the voltage curves of many transformers are rectangular. It is determined by the length of a square wave signal that can still be transmitted at a given voltage.

The voltage-time product (unit volt-second ) is calculated from the inductance  L and the saturation current  I sat :

The voltage curve can have positive and negative partial areas. For a rectangular voltage curve, starting from the core induction zero, the integral is simplified to

During a square-wave pulse , the current rises gradually at first, and then continues to rise very steeply when core saturation occurs. This causes the voltage to collapse and the shape of a square wave signal is falsified. For this reason, core materials with a high permeability number are also used for such transformers (e.g. to control power MOSFETs ) .

A positive or negative initial magnetization (integration constant) must often be taken into account, which is given by a current that flows at the beginning of the integration. The maximum voltage-time area also determines the lower transmission frequency limit of an AC voltage signal. The mean value of the magnetic flux and the mean current are set to zero: the end value of the integral of the previous half-wave is first integrated. The minimum frequency may therefore be lower than the time integral of the half-wave of this alternating voltage, which is equal to the voltage-time product.

Further parameters of transformers concern the parasitic inductance and capacitance. The former is the leakage inductance (not to be confused with the leakage field), which is created by the field components of the magnetic flux passing the windings. It is important for the accurate transmission of higher frequency components and should be as low as possible, i.e. H. you want a high coupling factor. It is improved by nested windings and a small spacing between the windings. Bifilar windings are also common. However, the increasing capacitance of the windings to one another due to the local proximity of the two windings is likewise undesirable. Since the distance is given by the thickness of the insulation and therefore cannot be arbitrarily small, high insulation strength, high coupling factor and low parasitic capacitance can only be achieved with difficulty together.