The title of this article is ambiguous. Further meanings are listed under Brewhouse (disambiguation) . 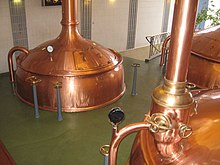 The brewhouse is the part of a beer brewery in which the wort is produced. For the processes, see brewing beer .

In beer production, a distinction is made between a warm block and a cold block . This is followed by the filling systems. The brewhouse is part of the hot block, which usually also consists of the systems for raw material pretreatment (malt / maize / rice / grain storage and transport, silos, cleaning, mill, dedusting).

Lauter tun (front), wort kettle and pan vapor condenser to recover the heat of evaporation (right or left in the background)

Other systems in the brewhouse in addition to those mentioned include water tanks for cold water, hot water and ice water, a cleaning system (CIP - cleaning in place), a sediment tank, a spent grains buffer tank and sometimes a so-called smooth water tank to collect the last wort from the lauter tun. Modern brewhouse systems are usually fully automated.

The most important key data of a brewhouse are:

Traditionally, the brew kettles were made almost exclusively from copper . This material has now been largely replaced by stainless steel . Copper is only used for optical purposes, in which case the stainless steel containers are clad with copper. There is also a variant made of glass that is used for show or teaching breweries.

Standard works of brewhouse technology are

For the construction of the brewhouse: