The title of this article is ambiguous. Further meanings are listed under Kohte (disambiguation) .

Kohten - typical structure. A yurt to the left

The Kohte (also Kote and Kothe ) is a type of tent . She is one of the black tents of the German youth movement , the German scouts and meanwhile other youth groups.

History of the Kohte 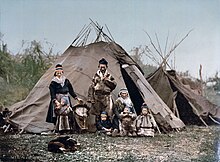 Norwegian seed family in front of a goahti (in the foreground) and a lavvu (in the background), ca.1900

Kohte, known today in German-speaking countries, originally comes from the German (autonomous) youth group of November 1, 1929 , a federation within the Bündische Jugend . It was developed around 1930 by Eberhard Koebel based on the tent shape of the Finnish Sami (in the region of Lake Inari ). After the Second World War it was taken over by the boy scouts and other groups, but until today it is essentially limited to the German-speaking area.

The word Kohte is very old and has roots in both the Finnish-Ugric and the Indo-European language families.

In addition to the Sami peat huts, the Swedish term kåta also includes a type of tent, which is more correctly referred to as lávvu . The Lávvu is a round, conical, transportable tent that was covered with furs, woolen cloth or canvas and served as a location-independent dwelling for the reindeer nomads of Lapland . The term Kote (in this notation) primarily refers to the permanent dwellings of the seeds.

Building a group of youth movements

A Kohte is (usually of four cotton cloths Kohtenblätter, Kohtenbahnen or Kohtenplanen called). These are two triangles of fabric sewn on the long side with the tip cut off. These can be connected in a rainproof loop using rain cover strips. The Kohten leaves are hung on a tied cross, which was originally supported by a pair of scissors made of two rods. In the meantime, however, you can mostly see the variant in which the cross is freely suspended and tied to a pair of scissors outside the tent. Depending on the situation, a central mast can also be used to pull the Kohte up. The scissors or the central mast will not fall over because they are held by the pull of the tent. However, a Kohte can also be attached and stretched at any point vertically above it. A dangerous variant is a tree in the wind that can easily tear a Kohte apart. By additionally tensioning four further corners, an overall octagonal basic shape is created.

Due to this construction, a group on a hike only has to take four Kohten leaves, possibly a smoke hole cover and ropes. The wood necessary for support poles, Kohten cross and pegs can be found in the forest. The Kohte is a tent for year-round use for up to 6-8 people (diameter 4.18 m) (based on the most common dimensions).

A Kohte has no bottom and a square smoke vent in the middle. This allows an open fire to be made inside . The smoke hole can be covered with a tarpaulin or poncho to keep out moisture. Some youth groups paint their black kohte large areas with mostly white motifs. The color more or less damages the tissue, which is brittle due to the color. For this reason, colored ornamental strips were initially attached. Today there are only a few groups who make this effort, especially since the Kohten are delivered without ornamental stripes.

Special constructions made from Kohten leaves

One or two individual Kohten sheets can be used for a small or bivouac tent : A single sheet is pinned with the narrow side to the ground. The wider side is held open by a vertical bar. This tent, usually called "toad" because of its shape, is a temporary weather protection for the night and can accommodate a person with luggage. The open side can be problematic and is therefore often covered with a poncho . Two toads with their open sides built against each other are accommodation for two people (+ luggage), which is called a "locomotive" or "locomotive".

In addition, thanks to its shape and connecting elements, the Kohtenblatt is also suitable for creating large to very large tents. The use of more than four leaves and the addition of side walls made of strips of earth and / or square tarpaulin enable the construction of yurts . These can in turn be combined to form “castles” and then, in extreme cases, comprise several hundred square meters. There are hardly any limits to the imagination. Since such structures always require suspension points (see above), rods and ropes must be adequately dimensioned.

As early as 1936 , the traditional company Stromeyer sold a Kothen model under the name "Elesco" , which had the dimensions typical to this day and was available in black, field gray and olive. Even after the Second World War, Stromeyer's plans were mostly in circulation. This continued until well into the 1980s. The tarpaulins made in Germany up to that point were buttoned using the Bundeswehr's aluminum sheet buttons, hardwood toggles, and loops and metal eyelets. In the 1980s, in addition to the standard tarpaulin in two weight classes made of high-quality tent fabric, a particularly heavy fire-resistant model was also on offer. With the bankruptcy of Stromeyer and the production stop in 1984, the market was reallocated. The decoupled Stromeyer Innovation GmbH in Radolfzell continued to produce until it was taken over by Mehler AG in 1990, although the high-quality wooden knobs were dispensed with for cost reasons and a replacement made of white plastic was used instead. Under Mehler, black tents were temporarily sold in a company's own production facility in the Czech Republic using the Stromeyer logo, which now only exists as a brand name. From 1988 the manufacturer "Troll" brought a new market innovation with a modified knotting system - only loops instead of buttons and no metal parts. Other small producers followed.

Today different manufacturers offer Kohten tarpaulins in different versions. These differ in their size, the material used, the color, the knotting system and an earth strip attached to the end of a tent sheet near the ground, which can either be individually buttoned or has already been sewn to the tarpaulin by the manufacturer. These strips of earth have been in use since the early 1950s. Some modern systems from different manufacturers are compatible with each other, with others you have to make sure to find the right tarpaulin when buying a new one. Modern Kohten lifts are mostly delivered in black, natural white and Bordeaux red, depending on the manufacturer.

For some years now, the company Tortuga from Radolfzell, founded in 2001 by former Stromeyer employees, has also been offering a larger version called "Wanderkohte" with a cultivated strip of earth. In contrast to the classic Kohten railways, no yurts can be built from the tarpaulins of the Wanderkohte because the connection system to the square tarpaulin is missing. A pocket closure also makes the tracks incompatible with the rest of the Kohten world.