The former collegiate church of St. Servatius in Quedlinburg - also known as St. Servatii or Quedlinburg Cathedral - is a monument of high Romanesque architecture dedicated to Saints Dionysius and Servatius . The three-aisled basilica , which was essentially built between 1070 and 1129, was the church of the Quedlinburg women's monastery . The church belongs since 1994 along with the Quedlinburg old town and the castle to the World Heritage of UNESCO , further it is a protected cultural asset to the Hague Convention and is Quedlinburger Memorial directory entered. 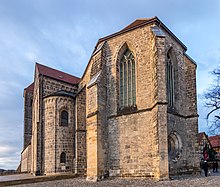 The current construction began soon after a fire in 1070, and the church at Pentecost in 1129 in the presence of King Lothar III. consecrated again.

Three previous buildings had previously stood at this point:

Building I was built before 936 as a chapel of a castle complex, in front of whose main altar King Heinrich I was buried. When the castle complex was converted into the women's monastery founded in 936, the church building was replaced by the larger building II. The so-called Confessio of Saint Servatius was built into this, but was soon filled in again. It was not uncovered until the 19th century in the form it can be seen today in the crypt. Under the government of Abbess Mathilde, another new building (Building III) was built and was completed in a first phase in 997. From the south aisle of the crypt, a staircase leads to the so-called St. Nicolai in vinculis path chapel . It was probably built before 997. In the case of the two columns with their greatly simplified and reduced “Ionic” capitals , the heavily sloping transom blocks are larger than the capitals. In 1021 the third church was consecrated on September 24th in the presence of Emperor Heinrich II . This building was destroyed by fire in 1070.

The high choir was rebuilt in the Gothic style by Abbess Jutta von Kranichfeld until 1320. During the extensive restoration under Ferdinand von Quast from 1863 to 1882, the church received two neo-Romanesque towers with pointed spiers. At that time they were provided with Rhenish helmets , contrary to style . 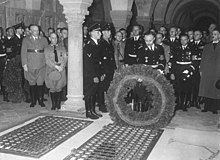 Heinrich Himmler at the Heinrichsfeier in 1938 in the collegiate church of St. Servatius

In the years 1938 to 1940 the “restoration” of the Romanesque choir took place inside; from the outside, the Gothic appearance of the choir remained unchanged. Inside, the altar, pulpit and stalls were removed and the Gothic choir vault destroyed in order to build a new, pseudo-Romanesque apse. From 1938 the church was occupied by the SS under Heinrich Himmler and was converted into a "consecration place" for the SS. Himmler is said to have had a "conversation" with Heinrich I (see picture of Heinrich in National Socialism ) and was called "King Heinrich" in his environment, not only in Quedlinburg, because of his fixation on his predecessor. He held the bones found during the excavations by Rolf Höhne on Schlossberg for the bones of Heinrich I and had them solemnly buried in the empty grave next to Queen Mathilde in 1937. The remains of the sarcophagus and documentation from the Nazi era are exhibited in the castle museum today.

After the spiers were damaged by artillery fire on April 17, 1945, the towers were restored from 1946 to 1948, but with low pyramid roofs adapted to the Romanesque style . Franz-Reinhold Hildebrandt was the pastor of the church at this time .

The collegiate church of St. Servatius was also called Quedlinburg Cathedral to indicate the rank of Abbess Mathilde as metropolitana at the level of (arch) bishop, although the church was never an episcopal church.

The central nave is separated from the side aisles alternately by two columns and one pillar ( lower Saxony column change ). The capitals and struts of the columns and pillars are decorated with rich sculptures (plant and animal motifs, especially eagles). Animals are also the dominant motif in the friezes on the upper slopes .

Strong Lombard influences can be seen both on the outer walls and in the ornamentation of the interior .

St. Servatius as a burial place

The church was used as a burial place for the founders Heinrich I and his wife Mathilde as well as the Quedlinburg abbesses . Their grave slabs, which have been preserved to this day and repeatedly examined in research, testify to the abbesses. 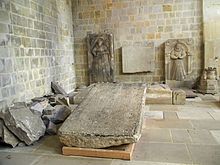 Grave slabs in the church, including those of Abbess Margarete von Schraplau (Schrappelaw) († 1379)

The donor's grave is located in the crypt . The bones of Queen Mathilde are actually there to this day. On the ceiling of the crypt there are remains of Secco paintings depicting biblical motifs. An extensive renovation in the years 2002–2009 secured the valuable ceiling painting, at the same time extensive lighting was integrated for the first time.

The tombstones of the Quedlinburg abbesses can be found in the crypt as Romanesque and Gothic sculptures :

There is also the grave slab of a knight with a shield and sword:

A staircase leads from the crypt to the so-called princely crypt, the indoor climate of which helps mummify corpses. There are among other things the coffins of Aurora von Königsmarck , the abbesses Anna II zu Stolberg , Anna III. zu Stolberg -Wernigerode and Marie Elisabeth of Schleswig-Holstein-Gottorf .

The high choir was adorned by a knotted carpet measuring almost 5.60 × 7.40 m , which was commissioned by Agnes II of Meissen and dedicated to St. Servatius was donated by hand on the Schlossberg for over 20 years. This has been preserved in fragments and has been on view again since the end of 2006.

After the Second World War, at the insistence of the Institute for the Preservation of Monuments, a wooden cross was first placed behind the altar, which was supplemented by a Gothic body . This loan from the Marienkirche in Freyburg (Unstrut) had to be returned in 2001. With the support of art consultant Bettina Seyderhelm, various suggestions for a new representation of the cross were submitted to the parish council. For the final competition, six artists were finally admitted, five of whom later submitted designs. The congregation formulated the following condition: “It is the concern of the congregation that the figure of Christ is represented in the artistic language of our time. The figure of Christ should have a cheering, victorious and triumphant effect, give hope and radiate reconciliation: 'In the world you are afraid; but be confident, I have overcome the world. ' ( Joh 16,33  LUT ) “( Seyderhelm (2005), page 18 ). In the second jury meeting in 2004, Thomas Leu's design was determined to be the winner.

The modern cross came to the collegiate church for Easter 2006 . It was created from aluminum by the artist from Halle . Compared to the draft, the figure has been reduced in size. This triumphal cross is supposed to represent the connection of Jesus on the cross with the dissolving figure of the rising and risen Christ. New altar candlesticks complement the cross.

The present organ was installed on the south side in the high choir after the previous organ could no longer be preserved due to moisture damage. In 1971 the ceremonial handover of the instrument built by the Alexander Schuke company (Potsdam) under Hans-Joachim Schuke with the opus number 420 took place. It has 1994 pipes and follows the neo-baroque sound ideal.

Disposition of the organ with the register arrangement according to the console:

The ringing of five church bells hangs in the north tower . The largest bell - called Aurora - was cast in 1705 and has the strike note c 1 . It hangs separately on the top floor and is rung by a cable on high holidays. The second largest and at the same time oldest bell of the peal is the Sunday bell, cast in 1504, with the strike tone es 1 . In 2002 the Perner bell foundry from Passau added three bells to this ringing torso :

"I command my spirit into your hands / You have redeemed me / Lord / You faithful God." (Decoration: tendrils and foliage)

"Everyone is waiting for you / That you give them food at the right time." (Zier: human chain ).

Doorknob of the collegiate church in the shape of a bastard

The church is used by the Protestant parish of Quedlinburg. Protestant church services take place there in summer. The Catholic parish of St. Mathilde celebrates its patronage festival on March 14th with a service.

The church is also used for tourism. It is a station on the Romanesque Road . Guided tours through the church and the cathedral treasury are offered. Since Mathilde's Day (March 14th) 2009, the crypt, which has been closed since autumn 2001, has been reopened and can be re-entered by up to 30 visitors every hour. In summer, the church is the venue for the Quedlinburg Music Summer . In cooperation with the Nordharzer Städtebundtheater, a theater project "The Name of the Rose" was implemented for the first time in May and June 2007 and, due to the great response, repeated in 2008, 2013, 2014 and until today.

Cultural monuments in the street Schloßberg in Quedlinburg