Facade of the castle

Linderhof Palace, view from the Temple of Venus to the garden ground floor and the south facade 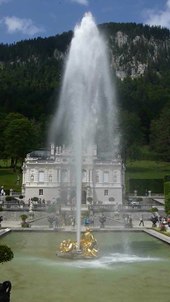 The "Royal Villa" Schloss Linderhof in the Upper Bavarian municipality of Ettal in southern Bavaria is a castle of the Bavarian King Ludwig II. It was built in several construction phases from 1870 to 1886 in the Neo-Rococo style. The small castle was built in place of the so-called "royal house" of his father Max II , which was moved in 1874 to a place about 200 m west of today's castle.

Linderhof Palace in the Ammergau Alps is the smallest of Ludwig II's three palaces and the only one that was completed during his lifetime. Linderhof is considered to be the favorite castle of the “fairy tale king”, where he stayed by far the most frequently. The castle and the gardens with their park castles ( Lustschlösschen ) are accessible to visitors. In 2018, the Bavarian Palace Administration counted 437,122 visitors; In 1990 there was a record attendance of 982,649 people.

Chapel in the Linderhof garden

In the place of the later Linderhof Castle, there was originally a simple farmhouse from 1790, which was converted into a hunting seat under Max II in the mid-19th century. This royal house was still built as a regional wooden house on a stone plinth, the actual Linderhof was a neighboring farm on whose property the hunting lodge was located.

From 1868 - Ludwig II had been crowned four years earlier at the age of 18 - the young king began with the first plans for several castles outside of the troubled capital of Munich. His interest in medieval knight culture and Richard Wagner's musical legends first prompted designs for Neuschwanstein Castle , the construction of which began in 1869. In 1867 the king had started to familiarize himself with material culture at the courts of the absolutist kings of France Louis XIV., XV. and XVI. too busy. In this context, Ludwig II had ideas to build a palace in the Graswang Valley near the hunting lodge based on the model of the Palace of Versailles , which was to be entirely dedicated to the French Bourbon kings. This project was initially called “Meicost-Ettal”, which is an anagram of the quotation “ L'État, c'est moi ” (I am the state) attributed to Louis XIV . The area of ​​the narrow valley turned out to be too small for the planned palace construction, and so the palace was finally built from 1878 on the Herreninsel in the Chiemsee, the New Herrenchiemsee Palace .

As an alternative, Linderhof came up with the idea of ​​a smaller refuge (place of retreat) analogous to the Marly pavilion built by Louis XIV from 1678 near Versailles . After the interior of the Königshäuschen in the Graswangtal had been redesigned in 1869, Ludwig II had the building expanded in 1870 by the architect Georg von Dollmann, initially by an east wing in a northerly direction. Up until then, the new wing was intended to be a one-off. On the upper floor it contained a main room on an oval floor plan with two annexes on a horseshoe-shaped floor plan and thus cited typical floor plans of baroque architecture. However, it did not have a representative facade based on this era.

From spring 1871 an identically structured west wing was added and both buildings were supplemented by a connecting wing on the north side (mountain side), which contained a first (not preserved) version of the royal bedroom. In it stood a magnificent bed on the south wall, so that, like today, the view through the windows looked north to the mountainside. The royal house was still in the south, but now outside the new north-south central axis. Ludwig did not have the hunting lodge demolished yet, as he had a high emotional connection to the building.

From February 1873, the castle was enclosed with stone facades based on the Rococo and the roof was added. In the following year the royal house was moved to its current location, about two hundred meters west of the castle. The south flank, which was thus open, was closed by the south wing, so that Linderhof has since formed a compact palace complex. In the south wing, Ludwig set up a small sequence of rooms at the level of the older rooms, grouped symmetrically around the south-facing mirrored salon in the central axis and presented as an enfilade (doors opening in one axis). In 1876 this area was completed inside. Access to the main floor was now via a vestibule on the ground floor of the south wing and a two-armed staircase in the building's former courtyard. In 1874, the planning of the park by the court gardening director Carl Joseph von Effner was also available, which mainly extended in front of the new southern main and entrance facade.

In 1885/86, the last construction work was to expand the bedroom to its present size by Julius Hofmann , and after Ludwig's death the work was completed in a simplified form.

Linderhof Palace quotes French pleasure palaces (Maisons de plaisance) from the 18th century, which Ludwig knew from contemporary art treatises and later descriptions. Motifs from the Bavarian Rococo are also taken up in the Munich Residence and Nymphenburg Palace ( Amalienburg ). In the overall structure, however, it is a separate building without direct models. Of not inconsiderable importance is the fact that Ludwig II used a considerable part of wood from the area for the construction work for Linderhof Palace and had the work carried out by local woodworkers. You cannot tell from the castle that it is actually made entirely of wood and only covered with plaster. Around this time, the king also introduced continued payment of wages in the event of illness .

The eastern tapestry room, photograph around 1900

Linderhof Palace has a complex but symmetrical floor plan due to its eventful architectural history. The upper floor with the living rooms of the king houses a total of two large halls, the staircase, four almost horseshoe-shaped cabinets, an oval dining room and study, as well as the tapestry room flanking the hall of mirrors . In the north-south running central axis are the largest rooms of the palace - the bedroom in the north and the hall of mirrors in the south - the side wings accommodate the smaller salons and cabinets. All rooms are lavishly furnished in the neo-rococo style, hardly a wall or ceiling surface is without decoration. The interior designs come from Christian Jank , among others . Similar to the dining room on Herrenchiemsee, the dining room of the castle is equipped with a tablecloth , which means that the table in the dining room can be lowered into the kitchen by a mechanism. There he was covered and brought back up by hand so that the king could dine without the presence of his servants.

The largest room on Linderhof is the north-facing royal bedroom, which can now be experienced in a second version. Its appearance is based on the bedroom of the French Sun King, but in different shapes and colors. As in Versailles (or the Munich Residenz), the bed part is separated from the rest of the room, which would allow the first and last audience of a day to be held by the bed, as the Sun King did. In the days of Ludwig the Bavarian, however, this vision was a thing of the past: The King of the Constitutional Monarchy of Bavaria had a completely different political meaning than the absolutist ruler of France. The veneration of the French royal family by Ludwig II can be found in numerous other details. Scenes from life at the court of Versailles are depicted in the ceiling of the dining room, and the horseshoe-shaped cabinets are decorated with portraits of French courtiers and nobles (including Madame de Pompadour and Madame Dubarry ). A magnificent vase from the Sèvres manufactory is on display in the stairwell . 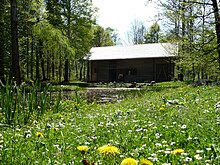 With the construction of the palace between 1874 and 1880, the palace gardens were laid out, and Ludwig II commissioned Carl von Effner to plan it. The park combines different forms of garden: A formal garden is laid out around the palace, which combines elements of baroque and rococo gardens . The large park that surrounds the ornamental garden within the Graswang Valley follows the models of English landscape gardens with groups of trees and winding paths.

The formal garden is almost cross-shaped, the center of this cross is the castle with the large basin in front of it, from which a fountain up to twenty-two meters high shoots. Along the main axis oriented in a north-south direction, the garden climbs up the slope in front of and behind the castle, following the course of the terrain, and is structured by terraces and stairs. The lateral spaces Bosketten designed similarly. The entire Linderhof Palace Park has numerous ornamental buildings and follies . There is a small temple of Venus on the heights of the terrace complex, the hill behind the bedroom wing is decorated with a cascade and ends in the so-called Neptune fountain. Exotic park buildings include the royal house, the Moorish kiosk , the Moroccan house and the so-called Hundinghütte, which was only subsequently moved into the park, and the hermitage of Gurnemanz . A special building is the artificial Venus Grotto , which refers to Richard Wagner's Tannhäuser and is supposed to represent the grotto in the Venusberg . A restoration began in 2016 and is expected to be completed by the end of 2024.

Castles and palaces in the Garmisch-Partenkirchen district