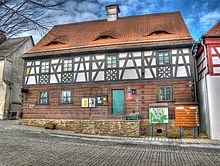 The Egerland half-timbered house is spread in the Tirschenreuth district in Neualbenreuth as well as in the nearby towns of Motzersreuth, Schachten, Ottengrün, Ernestgrün, Altmugl, Maiersreuth, Hatzenreuth , Querenbach , Egerteich , Mähring , etc. You can also find it beyond the national border on the Czech side some of these half-timbered houses in the localities around the city of Eger (now Cheb ). There are particularly beautiful buildings in the small village of Taubrath ( Doubrava in Czech ).

It was probably the same carpenters who created these half-timbered structures on both sides of the Bavarian-Bohemian border . The population around Neualbenreuth has always had close ties to the Egerland . There was always a brisk border traffic, which can also be seen in the jurisdiction that changed annually from the 16th to the 19th century between the Waldsassen Abbey and the city of Eger ( Cheb in Czech ).