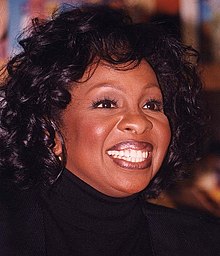 Gladys Maria Knight (* 28. May 1944 in Atlanta , Georgia ) is an American Soul - singer and actress who has since the 1950s on the stage and was part of their genre for several decades one of the leading singers and multiple Grammy was awarded. With her backing band she had many great hits as Gladys Knight & the Pips from 1961 until the breakup in 1989. The music magazine Rolling Stone recognized Knight's voice at number 51 of the greatest singers of all time . In her solo career, which has been going on since 1978, she has released soul recordings as well as several albums in the genres of R&B , gospel and jazz .

Gladys Knight performing on the USS Ranger in November 1981

Knight made her solo debut straight away with a super hit, which was also her last: License to Kill , the title song for the James Bond film License to Kill reached number three in Germany and number six in Great Britain in 1989, but it was in not a great success in the US. It was the first and only time that Knight was able to place a single in Germany.

Her 1991 album Good Woman with her biggest R&B hit as a soloist, Men , was not her first solo album. In 1978 and 1979 she released two albums with Buddha and Columbia Records without much success, as contractual difficulties prevented her from performing with the Pips in those years. Her Grammy-nominated album Just for You from 1994 contains a well-known live cover version of the Boyz II Men hit End of the Road .

The largest audience of her career was when she Knight in 1996 at the opening ceremony of the Olympic Games in Atlanta the song Georgia on My Mind sang. Also in 1996, Gladys Knight and her band were inducted into the Rock and Roll Hall of Fame . In the same year she sang the song Missing You for the soundtrack to the film Set It Off with Chaka Khan and her younger colleagues Tamia and Brandy and placed herself in the American pop charts for the first time in almost ten years. In 1997 she sang to President Clinton at the White House and the concert was televised. In 1998 Knight released the album Many Different Roads with spiritually inspired soul and gospel songs.

Her 2001 CD At Last won a Grammy Award for Best Traditional R&B Record. Her duet with Ray Charles Heaven Help Us All received a Grammy for best gospel song in 2004. Around the same time, Knight released her second gospel CD, One Voice, with the gospel choir Saints Unified Voices , which she founded in Las Vegas in 2002 . One Voice reached number 2 in the US gospel charts and was awarded a Grammy in 2005 for best gospel choir or choral album. The non-commercial choir is made up entirely of members of Latter-day Saint Church of Jesus Christ , of which Knight has been a member since 1997. From 1997 to 2006, Knight had a show at the Hotel Flamingo Las Vegas . After the casino contract ended, Knight made two small tours of England (2006) and South Africa (2007).

In 2006, Before Me, a homage to their role models Ella Fitzgerald , Billie Holiday and other jazz greats, as well as A Christmas Celebration with the Saints Unified Voices, appeared . In 2009 she sang in camera at Michael Jackson's funeral . She was accompanied by his brother Tito Jackson on her England tour Midnight Train to Love in October of the same year.

In 2019, she sang the US national anthem at Super Bowl LIII in her hometown of Atlanta.

Gladys Knight also tried several times as an actress. In 1976 she made her film debut in the drama Alaska Dreams . She was also seen, for example, in the films 20 Bucks and Hollywood Cops, as well as in the television series Charlie and Company and New York Undercover . In 2003 she hosted the American Juniors talent show after serving as a guest judge on American Idol . In February 2019, she reached third place as Bee in the finale of the first season of the US offshoot of The Masked Singer .

Gladys Knight was co-owner and operator of the Gladys Knight's Chicken & Waffles restaurant in Atlanta from 1999 to 2017 , whose specialty was fried chicken pieces with sweet waffles.

She has been married four times and has three children - two from the first and one from the second marriage. According to the IMDB, she is also a 16-time grandmother and six-time great-grandmother. She is the aunt of singer Aaliyah, who was killed in a plane crash in 2001 .