Korntal-Münchingen is a town in the Ludwigsburg district in Baden-Württemberg . It belongs to the Stuttgart region and the European metropolitan region of Stuttgart .

Korntal-Münchingen is located in the Strohgäu at an altitude of 285 to 405 meters northwest of the state capital Stuttgart and borders directly on it.

The border between Korntal and the Stuttgart district of Weilimdorf runs through the middle of the residential development. In Liegnitzer Straße south of Korntal train station , the houses on the northern side of the street (odd house numbers, postcode 70825) belong to Korntal and the properties on the southern side of the street (even house numbers, postcode 70499) belong to Stuttgart.

Korntal from Green Heiner seen from

The city of Stuttgart (districts Stammheim , Neuwirtshaus , Zuffenhausen and Weilimdorf ), Ditzingen , Ditzingen-Hirschlanden , Ditzingen-Schöckingen , Hemmingen , Schwieberdingen and Möglingen border the city of Korntal-Münchingen in turn (starting in the east) . Except for the county-level state capital Stuttgart all belong to the district of Ludwigsburg .

The predecessor communities Korntal and Münchingen were assigned to the new district of Leonberg , which emerged from the former Oberamt Leonberg, during the administrative reform during the Nazi era in Württemberg in 1938 . In 1945 the places became part of the American zone of occupation and thus belonged to the newly founded state of Württemberg-Baden , which was incorporated into the current state of Baden-Württemberg in 1952. In 1973 the district reform took place in Baden-Württemberg , when Korntal and Münchingen became part of the Ludwigsburg district.

The Korntal district was first mentioned in a document in 1297 in the statutes of the Canons of Sindelfingen . Korntal was a manor until 1819 and belonged to the community of Weil im Dorf (today Stuttgart-Weilimdorf) in the Württemberg Oberamt Leonberg . In 1819 the Korntal congregation was founded by the Korntal Evangelical Brothers Congregation as a civil-religious community. In connection with the construction of the Great Hall, King Wilhelm I of Württemberg granted the congregation a privilege, i.e. certain special rights - among other things, all residents had to be members of the Brethren congregation. The place lost this status with the establishment of the German Empire in 1871 and finally in 1919 with the constitution of the Weimar Republic .

In 1868 it was connected to the railway network ( Black Forest Railway Zuffenhausen – Calw). Due to the imperial constitution, the place lost the status of a privileged community in 1919. On June 30, 1958, the municipality of Korntal was elevated to a town.

Münchingen was first mentioned in a document in the Zwiefalter Chronicle in 1130 and ceded to Count Ulrich von Württemberg by the sons of Count Ulrich von Asperg in 1336 . Fief taker of the local government which since 1157 remained detectable Ministerialengeschlecht the Lords of Münchingen . The hospital courtyard of the Esslinger Katharinenhospital was built in 1278, the Glemsmühle was mentioned as Münchinger Mühle in 1381. The old Münchingen Palace was built around 1558 and the new palace in 1735. From 1448 the community was subordinate to the Württemberg office of Grüningen .

During the Thirty Years War in 1643 a large part of the town center was destroyed; the town hall, which was only built in 1599, was rebuilt in 1687, the Protestant Johanneskirche was rebuilt from 1645 to 1650. The school was first rebuilt in 1645, then rebuilt in 1743 and 1744. In 1718 Münchingen came to the Ludwigsburg office . In 1733 Regina Catharina von Münchingen sold the castle property to August Friedrich von Harling . When the new administrative structure in the Kingdom of Württemberg was implemented , the municipality was assigned to the Leonberg District Office between 1810 and 1812 . In 1906 Münchingen received a rail connection with the Strohgäubahn , a diesel-powered, single-track regional train from Korntal to Weissach . In 1920, the settlement of the Kallenberg district began . In 1997 and 2006, the renovation of the town center began.

The city of Korntal-Münchingen is administered in accordance with the principles of the municipal code for Baden-Württemberg . Administrative bodies are the municipal council and the mayor .

The mayor is a full-time civil servant and is directly elected by the citizens for a period of eight years; its tasks are the chairmanship of the municipal council and the management of the administration. The current incumbent is Joachim Wolf. On April 29, 2007, he received 59.36 percent of the vote in the mayoral election and thus prevailed against five other applicants in the first ballot. His predecessor in office was Peter Stritzelberger, who did not run for election again. On April 26, 2015, Joachim Wolf was re-elected mayor with 89.62 percent of the vote.

In all of the most recent local elections, the CDU was the strongest party in Korntal-Münchingen, with varying distances ahead of the Free Voters (in local or district elections) or the SPD. The Greens achieved more than 10 percent in all elections, making them the third or fourth strongest force, while the FDP's share of the vote is subject to strong fluctuations.

Coat of arms of the Lords of Münchingen

Korntal-Münchingen maintains town twinning with the French Mirande (Toulouse) and with the Belgian Tubize (Waterloo). The partnerships had already been initiated by the then independent town of Korntal. 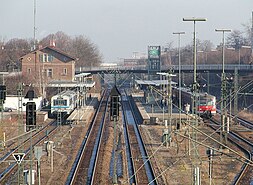 On the Black Forest Railway ( Weil der Stadt - Leonberg -Korntal-Münchingen- Stuttgart ), which on the upside, the S-Bahn line S6, and the S60 ( Böblingen - Renningen -Leonberg-Korntal-Münchingen Stuttgart) is Korntal on station Korntal at connected to the Stuttgart S-Bahn network; Both Korntal and Münchingen are also on the Strohgäubahn .

Korntal-Münchingen is connected to the national road network by the B 10 and A 81 . The only motorway junction in the Münchingen district is the Stuttgart- Zuffenhausen junction on the A 81.

Stuttgart International Airport is located in Leinfelden-Echterdingen, about 30 kilometers away .

The Korntal-Münchingen voluntary fire brigade consists of two emergency departments (Korntal and Münchingen), a cross-district youth fire brigade and an age department. Each operational department has a nominal strength of 54 active members. The departments each have a command vehicle and a team transport vehicle . The large vehicles are divided as follows:

The Faro Europe GmbH has its head office in Korntal-Münchingen. The company manufactures portable 3D - measurement technology . The savings bank Ludwigsburg operates respectively a branch in Korntal and in Münchingen, which both belong to the regional management Ditzingen.

The owner of the electricity and gas network is Energieversorgung Strohgäu GmbH & Co. KG , a joint venture between the cities of Gerlingen and Korntal-Münchingen and Netze BW GmbH .

Due to the geographical location and the topographical conditions, the city of Korntal-Münchingen drains into different sewage treatment plants.

The wastewater treatment for the Münchingen and Kallenberg districts is carried out by the Talhausen waste water treatment association. The Talhausen sewage treatment plant is located on the edge of the hamlet of Talhausen, which belongs to Markgröningen . The purified water is fed into the glems.

A two-year-old male wolf was spotted in the Korntal-Münchingen district at the beginning of January 2018. This is the first confirmed sighting of a wolf in the greater Stuttgart area in many decades.

Wikisource: Kornthal in the description of the Oberamt Leonberg from 1852  - sources and full texts

Wikisource: Münchingen in the description of the Oberamt Leonberg from 1852  - sources and full texts