The Blies is an almost 100 km long tributary of the Saar in the German Saarland and in French Lorraine ( Moselle department ) and crosses several natural areas on its course from the northeast of the Saarland in the St. Wendel district to the southern tip of the country.

With a water flow of 20.7 m³ / s at the mouth, the Blies is not only the largest tributary of the Saar, but hydrologically even its main source load, since the Saar is somewhat smaller at this point with an average discharge of 19.0 m³ / s. Of the total catchment area at the mouth, the Blies also takes up just over half with 1889 of 3673 square kilometers.

From a strictly hydrological point of view , the Blies is itself a tributary of the Schwarzbach , which, well before it flows into the Saar, provides around half of the total runoff. Meanwhile, the Schwarzbach almost doubled again only immediately before its confluence through the confluence of the Hornbach . In fact, the Blies system is a very irregular fan with three main branches, while the Saar has increased its water more continuously after the confluence of the Red and White Saar.

The name of the Blies is derived from the Celtic "blês", which means "to hiss" or "the hissing woman".

Natural areas of the catchment area

The source area of ​​the Blies lies between Selbach and Gronig am Momberg (dialect : Mommerich ) in the Nohfelden-Hirsteiner Bergland with submontane to montane altitude (typical plant occurrence : whorl-leaved white root ; Polygonatum verticillatum ). 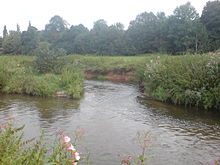 Blies at the mouth of the Erbach in Homburg-Schwarzenbach

The Blies flows southwards over a longer stretch, passing Bliesen , St. Wendel and Ottweiler , through the Prims-Blies hill country with pronounced relief energy and a high proportion of forest (especially beech forests). The soils here offer agriculture only moderate yield conditions. The valley meadows are partially under nature protection. On the southern edge of the natural area , the river leaves the Saar-Hunsrück Nature Park .

At Neunkirchen (Saar) the Blies enters the Neunkirchen valley basin , which is part of the Saarkohlenwald natural area . It leaves this again at Wellesweiler to cross the Homburg Basin , which is part of the St. Ingbert-Kaiserslauterer Senke , from north to south. At Wörschweiler it enters the Lower Bliestal - part of the Palatinate-Saarland Muschelkalk region and crosses the natural areas of Blieskasteler Bliestal , Gersheimer Bliestal and Bliesransbacher Schlingen . The lower reaches in the area of ​​the Saarpfalz-Kreis belongs to the Saar- Bliesgau . The natural area, which extends far beyond the Saarland, is climatically favored and has a high proportion of rare habitats that are worthy of protection (e.g. limestone, semi- arid grasslands , orchids ) and species (e.g. orchids ) The Bliesbruck flows from the Bliesbruck ( German: Bliesbrücken ) to the west, first for 3.5 km through French territory and then for 16 km as a border river between France and Germany. In the border town of Sarreguemines ( French .: Sarreguemines ) that the natural space Saargemünder Saartal heard it flows into the Saar (at Saar-km 104.0).

In the upper reaches, in the rocks of the lower Rotliegend , the Blies and their tributaries form small gorges, further below notch valleys and sole notch valleys . In the Spiemont area near Oberlinxweiler , the Bliestal is narrowed by resistant volcanic rock ( Kuselite ) ( Linxweiler gate ). The Blies then flows through the Ottweiler and Saarbrücker strata of the Carboniferous , then in a broader valley and once meandering strata of the red sandstone and from Breitfurt in the narrower valley strata of the shell limestone .

In the case of a wider floodplain, the Blies is assigned to the river type Auetal and in the lower reaches of the Meander Valley .

Flooded Bliesaue near Blieskastel after flooding in January 2011; Riparian wood mainly black alder; in the foreground the Bliestal cycle path

The water flow of the Blies is subject to strong fluctuations. At the Reinheim gauge , the difference between high and low water is in the range of several meters. According to the previous records, the flow rate fluctuated between 2.9 m³ / s (on July 24, 1959) and 373 m³ / s (on December 21, 1993). During the floods in 1970 and 1993, the old town of Blieskastel was almost completely flooded. One reason for high property damage is the development of the floodplains, which also reduced the natural flood retention area. Artificial retention basins like the one completed near Ottweiler at the end of the 1990s are only a major replacement. Therefore, more and more water renaturation such as that of the Oster , which is considered a successful example, is being promoted.

The high water values ​​of the Blies are more than double that of the Saar. Their slightly higher mean discharge is therefore not reflected in the low water bed of the Blies; thus it appears not only in name as a tributary at normal water levels .

Fertile alluvial land close to the bank was developed in large parts of the Bliesaue from the middle of the 18th century through drainage measures. Closely connected with this development are the irrigation and drainage cooperatives in the Bliestal, whose task it was to promote agricultural production, i. H. Drainage when there is a large amount of water and irrigation in dry periods. Two of the original three water and soil associations are still active.

The entire system in the Wässerwiesen consists of the two blies weirs - the Haseler weir and the Holzau weir - twelve secondary locks in the main trench and three further locks in the secondary trenches and the water trenches, which have a total length of 16,800 m. The cooperative area, which extends to the districts of Niederbexbach , Kohlhof , Limbach and Altstadt , comprises around 156 hectares and 1,400 parcels.

The Haseler defense was 1748/50 as mill dam of Haseler mill and the Holzauwehr built beside the former riverbed in the years 1779/81. While today's Haseler weir was rebuilt in concrete south of the old site in 1937/38, the wooden weir has been preserved in a renovated condition. Both plants are under monument protection as evidence of Saarland's economic history. 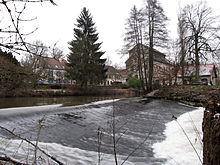 Weir of the former mill in Mimbach

Milling is one of the oldest trades on the Blies. In Breitfurt there is still an active grinding operation, the Bliesmühle. Other mills, such as in Mimbach , Gersheim or Herbitzheim , have been converted to generate hydropower. In many cases, however, today only ruins are reminiscent of the former mills.

On the Blies there are currently seven former mills with water storage facilities on the German side. H. Cross weirs built into the water , which had the purpose of damming the water in order to have even water power available even when the water is low. However, these transverse structures also led to the first serious interventions in the river bed and course: The water was dammed up and the natural debris transport of the water was prevented. For aquatic organisms (e.g. fish) migrating upstream, there were insurmountable obstacles.

Rafting was also carried out on the Blies until the 19th century . The Schwarzbach, coming from the Palatinate Forest , was floodable along its entire length, the Blies from the confluence of the Schwarzbach. The raftsmen brought the felled wood to Saarbrücken, where the smaller rafts also met from other side waters and it was rafted - in larger units - down the Saar, over the Moselle and Rhine to Holland. On the Blies, people spoke of Dutch wood , which was used in particular in shipbuilding. The rafting was hindered by the mill weirs in the Blies. Flößer and Müller therefore had to come to terms. While the wood was brought down the water through openings in the weir, the mill may lack the water to drive the mill wheel, which is why the raftsmen had to pay compensation to the millers, the so-called lock fee (lock fee ).

More than the mills, the hydraulic engineering of the past decades changed the river bed. The total length of the Blies was shortened from around 120 km to almost 100 km (i.e. by 17%) with a correspondingly increased gradient. In the 1930s, the first phase of the Reich Labor Service straightened the Blies, z. B. near Neunkirchen. Later, the water management authority shortened the meandering stretches - mostly under pressure from agriculture - and secured the banks with stones and distant wood, especially between Oberthal and Blieskastel between 1960 and 1985.

Protection and development of habitats

The Blies and parts of their floodplains between Limbach and Reinheim were registered as a European protected area under the Habitats Directive and thus part of the Europe-wide Natura 2000 network of protected areas . In May 2009 the Bliesgau was recognized by UNESCO as a German biosphere reserve .

As measures for near-natural water maintenance and development, among other things, fortified banks are broken up, redesigned and planted, river beds are structured and floodplains are protected from further development, as in Wörschweiler and Ingweiler . Ascent aids for migratory species such as the brown trout are still pending. In addition, the area of ​​the “Bliesaue between Blieskastel and Bliesdalheim” has been under nature protection since November 2nd, 2015 (N 6709-302).

Beavers were resettled on the Blies at the beginning of the 21st century .

By nature, the Bliesauen would be predominantly forested. The tree and shrub species show a different tolerance to the recurring floods. With the reclamation of the fertile floodplains, the floodplain forests were cleared with the exception of a few remains and converted into meadows, fields or pastures. This created a mosaic of different living spaces. In the Blies itself, there are aquatic plants such as hedgehog's cob and crested pondweed ( Potamogeton pectinatus ), but they are mainly found in slow-flowing sections, e.g. B. at Niederbexbach. Flooding is typical of many aquatic plants . H. the plants form swaths in the current, like the hooked water star ( Callitriche hamulata ), which can be found in the Blies z. B. at Bliesbruck .

In the water transition zone of the Blies there is no continuous reed belt (e.g. cane grass Phalaris arundinacea L. ), mainly because of the shading by trees and the fortification of the bank edges. Especially below Blieskastel, the Blies is close to nature and accompanied by a wooded bank, typically with black alder and various types of willow.

The floodplain meadows are widespread as smooth oat meadows , on the lower Blies partially with the rare caraway-leaved hair strand, which occurs in Germany especially in the Moselle region. Common nettle silk also occurs, a species that parasits on nettles .

In 1857 the Homburg – Zweibrücken railway was opened, following the course of the Blies from Homburg to Schwarzenacker. In 1878 the Bliestalbahn Zweibrücken – Saargemünd followed. Both routes have since been closed.

Tourism is not very developed in the valley of the Blies. Some cycling and hiking trails lead along the river, especially on former railway lines, such as the Blieswanderweg on the Bliestalbahn between Blieskastel and Reinheim and on the St. Wendel – Tholey railway line . Both the Saarland cycle path and the Glan-Blies cycle path (Staudernheim – Saargemünd) run in the lower Bliestal. The Blies is suitable for canoeing ; However, driving is prohibited in the area of ​​two protected areas (Blies and Bliesaue between Blieskastel and Bliesdalheim, approximately from Neunkirchen to the state border) from April 15 to August 15.