The district of St. Wendel is a district in Saarland .

The largest part of the district belongs to the nearby England , the north still has a share in the foothills of the Hunsrück .

Until the end of the 18th century, the area of ​​the district of Sankt Wendel belonged to different dominions ( Kurtrier , Nassau-Saarbrücken , Pfalz-Zweibrücken , Lorraine ). From 1798 to 1814 the region was part of the French department de la Sarre . As a result of the Congress of Vienna (1815), Duke Ernst I of Saxe-Coburg-Saalfeld established the Principality of Lichtenberg in 1816 , which he sold to Prussia in 1834 . This then formed the Sankt Wendel district within the Trier government district in the Rhine Province .

A change in the territorial situation occurred in 1920 when, as a result of the entry into force of the Versailles Treaty (1919), the Saar area was placed under a special administration of the League of Nations . The south-western part of the then St. Wendel district (St. Wendel, Oberthal, Tholey, Marpingen, Namborn, Ostertal without black earth) came to the Saar area.

The town of Baumholder, now outside the Saar area, and 67 rural communities in the area between Glan and Nahe formed the remaining district of Sankt Wendel-Baumholder with its administrative headquarters in Baumholder, which remained in the Trier administrative district of the Rhine province. As a result, the Sankt Wendel district lost around two thirds of its territory. After the League of Nations administration ended on March 1, 1935, the old territorial conditions were not restored. The "Saarland", that was the official name of the area, came under direct Reich administration. The remainder of the district remained in the Rhine Province and was incorporated into the Birkenfeld district in the Koblenz district on April 1, 1937 .

After the seizure of power of the Nazis in 1933 in the German Reich citizens of (today's) county area survived, although only a few kilometers apart, in two completely different political realities: During the German Empire was associated the northeast in the power field of Nazis who the remained Saar associated Southwest under international League of Nations administration. The latter, like the entire Saar area, therefore played a key role as a refuge for Germans persecuted by National Socialism and as a hub for smuggling anti-racist propaganda into the German Reich. This is particularly clear when looking at the municipality of Namborn , which was directly on the border on the Saar region. Here the premium hiking trail “Smuggler Path” tells this part of the history of the district. After the clear vote in the Saar vote on January 13, 1935 in favor of an annexation to the German Reich , this was carried out on March 1 of the same year. As a result, as in the whole of Germany, there was massive persecution of opposition members and citizens of the Jewish faith in the south-western area of ​​today's St. Wendel district, but also resistance to National Socialist crimes.

From April 1, 1943 to August 1, 1945, the St. Wendel district temporarily lost its independence, as the then Gauleitung Westmark ordered the merger with the Ottweiler district .

The Saar state , formed in 1946, was spatially larger than the area of ​​the League of Nations administration (1920–1935); the district of St. Wendel was also enlarged. First, on July 18, 1946, the French military government took over the municipalities of Bosen , Eckelhausen , Eisen , Eiweiler , Gehweiler , Gonnesweiler , Grügelborn , Hirstein , Leitersweiler , Mosberg-Richweiler , Neunkirchen , Reitscheid , Schwarzenbach , Selbach , Sötern , Steinberg -ckenhardt , Türkismühle and Walhausen reclassified from the Birkenfeld district to the St. Wendel district.

Most recently, the district was changed in 2003 through a state treaty between Saarland and Rhineland-Palatinate . A street belonging to the Saarland Haupersweiler (municipality of Freisen ), which was about one kilometer from the village and geographically directly bordered the area of ​​the local municipality of Herchweiler (district of Kusel), was assigned to the state of Rhineland-Palatinate.

The Catholic parishes in the district belong to the dioceses of Trier and Speyer . Attempts in the years of the autonomous Saar state (1947–1956) to also form an independent Saar bishopric (as the seat of which St. Wendel would definitely have been considered) failed.

The district council is the municipal representative body in the St. Wendel district. The citizens decide on its composition every five years.

The district election on May 26, 2019 led to the result shown on the right and the resulting distribution of seats:

Overview of the results of past district council elections

The direct election of the district administrator in 2007 had the following result:

The shield is divided into silver and blue. Inside there is a red-tongued and red-armored lion with changed colors, covered with a golden heart shield. In this there is in turn a red heraldic lily. 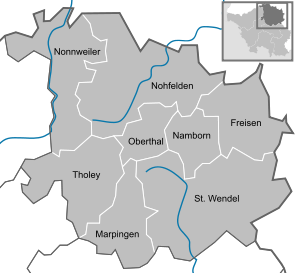 Many former municipalities in the district lost their independence on January 1, 1974:

In the study published by the German Association for Housing, Urban Development and Spatial Planning in Berlin on January 26, 2005, and which relates to the attractiveness of purchasing power , the St. Wendel district came in fifth among all 439 German districts and cities. Only the large cities of Munich , Hamburg and Berlin as well as the Starnberg district are placed in front of the St. Wendel district.

The study is based on the information provided by the state statistical offices. It is noticeable that the St. Wendel district achieved top positions nationwide in terms of disposable income, i.e. purchasing power. Here, the district is in 15th place, and in terms of purchasing power growth it is in first place nationwide. Together with other indicators, this results in fifth place.

Since January 1, 2005, the St. Wendel district has been the only district in Saarland to take responsibility for looking after the long-term unemployed as part of the so-called option model . Organizationally, this task is part of the municipal employment promotion. The district has had by far the lowest unemployment rate in Saarland for years , not least thanks to the long-term activities of the economic development agency (www.wifoe-gmbh.de). The unemployment rate is currently 3.4% (November 2011). The district has a particular focus on combating youth unemployment . With the preventive system of youth professional assistance, attempts are made to stabilize young people with school and / or personal problems at an early stage and to enable them to graduate from school as well as a training position. The project was highlighted in 2007 by the Bertelsmann Foundation as one of five model projects that were particularly successful at the federal level. In November 2011, the unemployment rate of under 25-year-olds in the area of ​​responsibility of the district was 0.1%, which puts St. Wendel in second place of all 421 district and independent cities nationwide.

There are 22 designated nature reserves in the district (as of February 2017).

The development of a tourist infrastructure was already started in the 1960s. One of the basic measures was the creation of an artificial reservoir (120 hectares of water) that could be used by tourists, the Bostalsee , which was designed under the then District Administrator Werner Zeyer (later: Minister President of Saarland) and commissioned in 1979. The lake is surrounded by a 7 km long hiking and cycling path, it can be used for swimming, sailing, surfing and pedal boating. A lido and a campsite complete the offer.

Other tourist offers: summer toboggan run in the lake near Braunshausen, the Celtic ring wall of Otzenhausen ( La Tène period ), popularly known as the " Hunnenring ", Celtic-Roman excavations in the Varus Forest near Tholey , nostalgia trips with old railroad trains and motor coaches the disused Ostertal route, golf on the 27-hole course near the district town of St. Wendel and in the golf park Bostalsee near Nohfelden -Eisen, a dense network of well-developed hiking and cycling trails, road of sculptures (St. Wendel) ( " Sculpture Symposium "), ethnological museum of the Steyler missionaries in St. Wendel, historical pilgrimage site at the grave of St. Wendelin in the Wendalinus basilica ( basilica minor ) (St. Wendel).

The district area is touched by the Federal Motorway 1 Saarbrücken - Trier and the A 62 Pirmasens - Nonnweiler , which meet in the Nonnweiler motorway triangle . Furthermore, the district is opened up by federal and state roads. The most important federal highways are the B 41 Neunkirchen - Birkenfeld and the B 269 Sankt Wendel - Saarlouis .

The railway opens up the district via the Nahe Valley Railway (KBS 680).

The most important train stations in the district are St. Wendel and Türkismühle, where regional express trains also stop.

There are also two museum railway lines, the Ostertalbahn (KBS 12683) from Ottweiler to Schwarzerden and the Hochwaldbahn (from Türkismühle to Hermeskeil). The Türkismühle – Kusel railway line still partially exists, but there are no scheduled trains on it.

On January 1, 1957, when the Saarland joined the Federal Republic of Germany, the district was assigned the distinctive symbol WND . It is still issued today.