from Wikipedia, the free encyclopedia
i16 i18

The Schwarzerden station is the terminus of the Ostertalbahn beginning in Ottweiler . It was opened in 1936 with the commissioning of the Türkismühle – Kusel railway line . Two years later, with the completion of the Ostertalbahn, it became a railway junction. With the closure of the route between Freisen and Schwarzerden from Türkismühle in 1955, he lost this function again. Due to the temporary separation of the Saarland after the Second World War, it also functioned as a customs station from 1947 to 1959.

It has been the terminus since 1970, when the Schwarzerden – Kusel section was closed and then dismantled. Regular passenger traffic on the Ostertalbahn ended in 1980. However, a museum railway has been operating on it since the turn of the millennium.

The station is located northeast of the settlement area of Schwarzerden . Industriewerke Saar (IWS) is located in the immediate vicinity . Bundesautobahn 62 runs around half a kilometer further north .

The Ostertalbahn, which still exists in Ottweiler, goes around Schwarzerden in an almost semicircular arc. Until 1969, it shared the last 900 meters before reaching the terminus with the railway line from Türkismühle coming from the west. The so-called “ Fritz-Wunderlich-Weg ” is now on the route of the latter . In addition, the train station is the starting point of the railway adventure trail , which is also located on the disused railway line.

First efforts to achieve a rail connection for black earth go back to 1856. In the course of the construction of the Rhine-Nahe Railway , an initiative aimed to set up a route via Kusel to St. Wendel or along the Oster to Neunkirchen. The efforts were unsuccessful, however, because Prussia wanted such a railway line primarily within its own territory, but some local communities as well as Kusel and parts of the middle and lower Glantal between Altenglan and Staudernheim belonged to Bavaria .

After the Ostertal communities made another attempt in 1894 to get a rail connection, there was support from the district master builder von Kusel. He pleaded for the route to run contrary to the original plan to Schwarzerden along the Oster, in order to then lead it further east towards Kusel. After the company Lenz & Co. from Stettin had already been commissioned with the planning, the Prussian government brought the project to failure because, for strategic reasons , they wanted to see the line run in standard gauge; for financial reasons, however, this was not possible.

At the same time, there had been efforts since the 1860s to build a main line from Trier via Türkismühle and Kusel to Landstuhl. The efforts were unsuccessful, as only a rail connection was established between Landstuhl and Kusel . After another attempt had been made in 1910 to build a railway line between Türkismühle and Kusel, the outbreak of the First World War prevented implementation. It was not until 1931 that the Reich Ministry of Transport gave the green light for the construction of the line in order to counteract the global economic crisis that had broken out in the meantime. Due to objections from residents from Schwarzerden and the neighboring towns, there were discussions about the route of the route.

With the continuous opening of the Türkismühle – Kusel railway on November 16, 1936, Schwarzerden was connected to the railway after the Kusel – Diedelkopf section had been passable six months earlier and the Türkismühle – Freisen section had been open since 1934. Along the route, which was run as a branch line, Schwarzerden was one of a total of two crossing stations. In order to bring the Saar, which had meanwhile been separated off, back to the German Reich through a referendum, the NSDAP , which had ruled since 1933, also initiated the construction of the Ostertal route, which had been required for decades, from 1934 onwards. In relation to the referendum, this should serve as bait for the Saarlanders to compensate for the economic hardship of the region. After the Ottweiler – Niederkirchen section had been opened on September 26, 1937, the connection to Schwarzerden took place on May 15 of the following year. This made Schwarzerden station a railway junction.

On May 5, 1941, a directory entitled "Vital Trains" was published. This was to prevent the fact that the timetable could often not be adhered to due to the Second World War, which had been raging since 1939 . It included a minimum number of trains that had to be adhered to despite the war conditions. Accordingly, at least three trains per day had to run between Kusel and Ottweiler. After Schwarzerden became part of the temporarily separated Saarland in 1947, customs controls took place in the station. A year later the miners' trains on the Kusel – Neunkirchen route were closed to civil traffic.

In 1958 passenger traffic between Kusel and Schwarzerden was resumed, but stopped again in 1964. Even before that, customs controls had been superfluous since 1959 in the course of the economic reintegration of the Saarland into Germany. In 1966, freight traffic also ended in this section. In 1969 the remaining freight traffic between Schwarzerden and Grügelborn was discontinued and the section was dismantled. After operations on the section to Kusel were officially closed in 1970, dismantling also took place here a year later. This made black earth the terminus. The tracks in the station were dismantled as early as 1972, and three years later it was no longer occupied.

On May 31, 1980, passenger traffic on the Ostertalbahn was stopped. From then on, the station was only served by freight traffic. In the 1980s, the station was also dismantled to a total of two tracks. On May 23 and 24, 1987, a special company train to Schwarzerden, which had started in Schönenberg-Kübelberg on the Glantalbahn, which was already being used for passenger traffic , arrived . 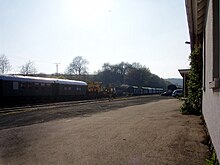 After Deutsche Bahn had announced its intention to shut down in the late 1990s, the St. Wendel district took over the line on January 1, 2000; the long-term goal was its continued existence as a museum railway. In the same year, the first line maintenance vehicles arrived and were stationed at the station. On September 15, it was expanded by three sidings, which means that it has had a total of six tracks since then. The platform was also renovated two months later. Tourism began on April 14, 2001; On that day, a train consisting of four Uerdingen rail buses reached Schwarzerden. On December 31 of that year, the freight traffic previously operated by Deutsche Bahn ended . In the following years, the number of vehicles housed in the station increased continuously.

Schwarzerden station has an architecturally simple reception building. In the meantime it was bought by Industriewerken Saar (IWS) and then renovated.

Directly next to the station building there used to be a water tower with wooden paneling, which served to supply the steam locomotives at this railway junction. The storage container had a total volume of 20 cubic meters. It was filled from a specially designed well, from which the water was pumped into the container. The latter had a downpipe that led to a water crane that was on the island platform between tracks 1 and 2.

The station also currently has a main track and seven side tracks, eight switches and a private siding with three tracks. In connection with the conversion of the Ostertal route into a museum railway, the loading ramp was also reactivated.

Two steam locomotives have been housed in the station since the 2000s. Both are privately owned, are not operational and are therefore not used on the museum trips.

With the opening of the railway line between Türkismühle and Kusel, six pairs of trains ran per day, in addition there were connections that ran exclusively between Schwarzerden and Kusel. Although the railway line in Kusel went directly to the connection towards Landstuhl , there was only a year later a continuous train from Türkismühle to the Altenglan junction station in Glantal. After the full length of the Ostertalbahn was opened in 1938, there were continuous connections from Kusel via Schwarzerden to Neunkirchen. For the residents of the Kusel region, the route from the Ostertal was always more important than the connection to Türkismühle, as many of them were employed in Saarland pits and huts and with the help of this rail connection, which had existed since 1938, they had the opportunity to go home every day to drive. After the temporary cessation of passenger traffic to Kusel in 1951, two pairs of trains ran on this section at the end of the 1950s; when it was discontinued in 1964, only one was left. In 1958 there was also a so-called "corner connection" from Schwarzerden via Kusel, Altenglan and Bad Münster to Bad Kreuznach. At the time of the cessation of passenger traffic on the Ostertalbahn, a total of ten pairs of trains were running from Monday to Friday.

After traffic on the Freisen – Grügelborn section was discontinued in 1955 and officially shut down two years later, the Grügelborn – Schwarzerden section only served as a siding for the Schwarzerden station. It was served via the Ostertal route. Freight traffic continued on this section until 1969. After the cessation of passenger traffic, only transfer freight trains ran on the Ostertalbahn , which initially served Niederkirchen, later exclusively black earth. The most important freight customer on site was the armaments company Industriewerke Saar (IWS) , which has a siding branching off from the station. There was not a single switch along the Ostertalbahn between Ottweiler and Schwarzerden, which means that the IWS actually had the longest industrial track in Germany. Due to this freight customer, there were often shipments that exceeded the loading gauge .

Museum rail traffic has been taking place since 2001. It is carried out from March to October at irregular intervals; three pairs of trains run between Ottweiler and Schwarzerden. During this time, special company trains also come onto the route. In November and December, the so-called "Nikolaus special train" is used.