View from the tower of the Bexbach Mining Museum

Bexbach ( listen ? / I ) is a Saarland city ​​in the Saarpfalz district . It has about 18,000 inhabitants and borders the district of Höchen on the state of Rhineland-Palatinate .

Bexbach is located in the Saarpfalz district between the two district towns of Homburg and Neunkirchen and about 25 km northeast of the state capital Saarbrücken . The Bexbach flows through the city to the Blies . The Höcherberg , on which the districts of Frankenholz and Höchen are located, is the highest point in the southeastern Saarland.

Due to the mine dump Schacht III in the Höchen district, a landmark visible from afar, the Höcherberg and thus Bexbach can also be seen from a great distance. This represents the highest coal mine in Germany with a summit height of 494.3 m above sea level. NHN .

The city is located in the temperate climate zone . The average annual temperature in Bexbach is 8–9 ° C and the average annual rainfall 750–800 mm. The warmest months are July and August; the coldest January and February.

The following cities and communities border the city of Bexbach:

Bexbach was first mentioned in a document in 1219, today's Kleinottweiler district in 1221, Höchen in 1261 and Ober- and Niederbexbach in 1310. From the 14th century, the inhabitants used a large amount of iron ore , and from the 16th century also coal . The population was small, nobles and members of religious associations were represented. During the Thirty Years War , the entire urban area was almost completely destroyed by marauding troops. In 1648 the Peace of Westphalia was concluded. In these contracts it was stipulated that the county of Nassau-Saarbrücken , to which Bexbach also belonged, passed to France . The now deserted area was not repopulated until 1683 with a few families, mainly from Lorraine . In 1697, the former sovereigns regained their former sovereignty over the country and its people. In 1755, the Mittelbexbach dairy was recognized as part of the Nassau-Saarbrücken county.

In 1789, the French Revolution brought new hopes for those suffering from feudal rule . The Revolutionary Wars introduced a new social and state order.

In 1793 the French administration allocated the Mairie (mayor's office) Mittelbexbach to Mairie Limbach . In 1797, the French state implemented its first administrative reform. As a result, the département de la sarre was created in 1798 with 31 cantons . Most of the 600 inhabitants of Bexbach belonged to the canton of Waldmohr . French was introduced as the official language without exception .

After Napoleon's final defeat at Waterloo , the city was assigned to the Rhine district of the Kingdom of Bavaria in 1816. In 1848 Mittelbexbach was given its own mayor's office , to which the neighboring towns already belonged.

The Bexbach station , the oldest station in today's Saarland, was built as the Bavarian-Palatinate terminus of the Palatinate Ludwig Railway . Nowadays it is operated as a station on the Homburg – Neunkirchen line. In 1849 the opening of the Ludwigsbahn by the company of the same name presented new perspectives for the residents. Thus, from one day to the next, a significant improvement in the infrastructure for Homburg and Neunkirchen became apparent. The living conditions improved significantly. In addition to working in the mine , many residents also worked on their own farms. This is how the term “ miner farmer ” came about . The individual quarters were largely connected to the water and electricity supply. The first school was the Pestalozzi School and the town hall was built around the same time.

After the First World War , the Saar area was separated from the German Reich on October 1, 1920 and the Homburg district was reduced in size. That district was from then on the border district of the Saar area, which returned to Germany on March 1, 1935. The local political situation was reorganized. On April 1, 1937, the new municipality of Höcherberg was created through the merger of the previous municipalities of Höchen, Oberbexbach (with Frankenholz) and Mittelbexbach (with Ludwigsthal). This community was dissolved on May 1, 1947 shortly after World War II . The communities Frankenholz, Höchen, Mittelbexbach and Oberbexbach were (re) established. The regained autonomy strengthened the economy in the communities. Mittelbexbach received its own coat of arms in 1951 and was renamed Bexbach in 1955. Since the Saarland was again under French administration between 1945 and 1956, another Saar referendum took place in 1955 . According to the result, the Saarland was incorporated into the Federal Republic of Germany as the tenth federal state . On May 29, 1970 Bexbach were from the Saarland Interior Minister Ludwig cord the city rights awarded.

Both the city and the river flowing through it received the name from the knight of Beckensbach. The inhabitants are called Bexbachers . In Saarland dialect , the Bexbacher Betschbacher and the city accordingly call themselves Betschbach .

The district of Ludwigsthal , which formerly belonged to Bexbach , was assigned to the district town of Neunkirchen on January 1, 1974.

In almost every district of the city there is both a Catholic and an Evangelical church community. Only in Kleinottweiler is there only one Protestant parish.

In the 2019 local elections , the CDU became the strongest parliamentary group for the first time, with significant losses for the SPD.

In the direct election of the mayor on May 26, 2019, Christian Prech (CDU) prevailed against incumbent Thomas Leis (SPD) with 53.42% of the votes cast.

Allocation of seats in the individual local councils (as of local elections on May 25, 2014):

Presentation to the public

Since the approval of the Saarland Ministry of the Interior, Bexbach has been using yellow and green as the city colors for several decades . These can also be found on the flag that is hoisted on the Hindenburg Tower, for example.

In contrast to many other cities and municipalities, Bexbach does not use the city arms to present itself to the public. For such purposes, the administration designed the City of Bexbach - Partner der Bürger logo .

The Bexbach location , including the Bexbach sports promotion group , was dissolved in 1996. The area of ​​the former Saar-Palatinate barracks was rededicated to a commercial area (Saarpfalz-Park).

The former on- site training area, over 100 hectares in size, was the training area of ​​the technical relief organization until 2008 . Since 2008 it has been marketed by an investor as a near-natural event site for live role-playing games , among other things .

Bexbach is linked to the German trunk road network by motorway connections to the A 6 and A 8 . In addition, the B 423 (federal border France Mandelbachtal - Altenglan ) runs through the Bexbach district of Kleinottweiler.

From the Bexbach train station , regional trains run all day on the Homburg – Neunkirchen route to Homburg and in the opposite direction to Neunkirchen (Saar) , Illingen (Saar) and sometimes also to Saarbrücken without changing trains . They enable a connection to the long-distance traffic of the Deutsche Bahn . From 1903 to 1905, the Nordfeldbahn , which was used exclusively for freight traffic, ran from the Jägersburg station on the Glantalbahn to the Nordfeld mine .

Bexbach has had an airfield since 1956 . On April 29, 1956, the first glider pilots took off on a test flight from Bexbach airfield .

Bexbach participates in numerous hiking trails of the Saarwald Association , including the Höcherbergweg and the Saarland circular hiking trail . Since March 2007 Bexbach has created a circular hiking trail that is 37.75 km long and leads through all parts of the city. The path can also be hiked in several stages, as a total of four cross connections have been set up. The hiking trail starts from Oberbexbach with the marking green-yellow cross of the Palatinate Forest Association , which leads via Johanniskreuz and Neustadt an der Weinstrasse to Ludwigshafen am Rhein .

The flower garden, which was created for the exhibition Gardens and Flowers in Social Housing in 1951, is well worth a visit . With a large playground and a Chinese garden, Bexbach presents itself from its modern side.

Miniature of the Saarbrücken Ludwig Church

On June 28, 2017, the Gulliver World 2.0 was officially opened in the flower garden , showing 26 restored replicas from the former world in the German-French Garden in Saarbrücken. The miniature structures are embedded in the park. These include models of the Eiffel Tower in Paris, the pyramids of Giza or a piece of the Berlin Wall - they are all now in the publicly accessible part of the flower garden in Bexbach - but on a scale of 1:33.

Next to the flower garden is the green, former Monte Barbara mine dump . A statue of Saint Barbara , patroness of the miners , crowns the landscaped structure.

In the flower garden is the Hindenburg tower (see below), which houses the Saarland Mining Museum. The history of hard coal mining in the region and its importance are clearly illustrated in the tower . Everything you need to know about technology, safety, history and social issues in mining is presented on seven floors. The top floor offers a panoramic view. 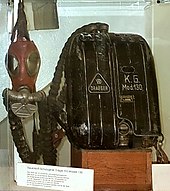 Under the tower there is a show mine with historical and newer machines. Over the decades, miners have built a tunnel that has been expanded again and again, in which old and new extraction techniques are presented. The tools and equipment shown show how coal was mined at ever greater depths and thus with ever greater difficulties. In 1994 the Saarland Mining Museum Bexbach took over the premises from Bexbach.

In addition to the flower garden mentioned above, there is a city ​​park (called “Green Lung”) through which the Bexbach flows as a connection between the city ​​center and the Oberbexbach district . There is also a playground for children in the complex.

When the water supply in Bexbach could no longer be guaranteed at the end of the 1920s, the municipal council decided to build a high-level water tank with a capacity of 200  m³ . Construction began in 1931. At the request of the community, the building should also serve as a lookout tower and a mine museum.

The outer skeleton of the tower consists of eight, the inner shaft of four concrete columns, the walls are filled with pumice concrete hollow stones. The floor plan is 10 × 10 m. The glazed viewing platform at a height of 40 m can be reached with an elevator . The tower was named after the then Reich President Paul von Hindenburg .

The Bexbach station , which was built in 1848/1849 as a Bavarian border station to the Prussian Rhine Province, has the oldest surviving station building in Saarland and is a listed building . Only the building in Homburg was built two years earlier, but was replaced by a more modern one after the Second World War. The Bexbach station is home to u. a. a museum about the history of the train station and the pits at Höcherberg. The old waiting hall is the home of the “Choir Gleis 1” and is the new clubhouse of Modellbahnfreunde Bexbach e. V. , who endeavor to maintain and maintain the station.

The station building has been renovated and converted into a cultural station since February 2018 .

Bexbach is the fictional setting of the sitcom family Heinz Becker by and with the native Bexbacher Gerd Dudenhöffer .

Municipalities in the Saarpfalz district