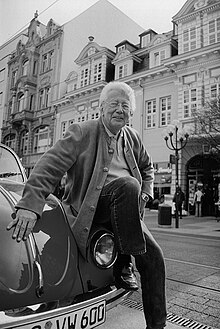 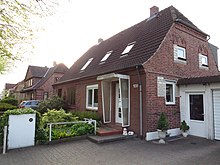 Aubach Castle in Lauf.
Dieter Thomas Heck and his wife Ragnhild lived here from 1986 to April 2009.

Heck was born in Flensburg, where his parents lived in the Mürwik district at Tirpitzstraße 109. Heck's father Nils Heckscher was an illegitimate son of Prince Carl Gustav zu Ysenburg and Büdingen (1875–1941). When Heck was a few weeks old, his parents moved with him to Hamburg because his father had been transferred there as a sales manager for a lemonade company. Therefore, Dieter Thomas Heck grew up in the Hanseatic city. When he was asked about his hometown Flensburg in October 2012, he said:

“I didn't live here. Later I performed in the Deutsches Haus and at the opening of the Kloppenburg store . "

At the age of five he was buried under a cellar stairs in a night bomb attack in Hamburg. Because of this trauma, Heck began to stutter after his rescue, which he put down with a vocal training. This also led to his ability as a quick speaker. After completing secondary school and a technical high school, he completed an apprenticeship as a technical businessman at the Hamburg Borgward general agency Hugo Pfohe and then worked there for some time as an automobile seller, but left the company before the Borgward group went bankrupt.

Beginnings of the show career

Under the name “Dieter Heckscher” he appeared in Peter Frankenfeld's talent show toi, toi, toi in 1959 as a singer with the Peter Alexander title A little more in the Friedrich-Ebert-Halle in Harburg and sang in 1961 in the preliminary round of the Eurovision Grand Prix de la Chanson, today's Eurovision Song Contest . In order to advance his singing career, he switched to a record company for a monthly salary of DM 400. During a visit to Südwestfunk in Baden-Baden on November 26, 1963, Herbert Falk, the radio department head, asked him to give an interview in the studio as a fictional guest, as the actual guest had been canceled. The moderator asked such awkward questions that Heck took the conversation into his own hands and received an offer from Falk for a radio broadcast. From then on, Heck went on the air for 90 minutes every Saturday.

In the spring of 1964, Camillo Felgen called Südwestfunk with a request for a vacation replacement. The vacation replacement was followed by a time at Radio Luxembourg from February 1965 to September 1966 . It was customary there to call yourself by your first name. But because there was already a Charly and a Dieter, Heck came up with the idea of ​​looking for a new name for himself. To this end, the youth magazine Bravo launched an appeal under the heading: “Disc jockey without a name”. The readers found the name Thomas to be the most appropriate, whereupon the now known name Dieter Thomas Heck resulted, where Thomas was initially still placed in quotation marks, but these were soon dropped. At Radio Luxemburg he worked with Frank Elstner , with whom he was on friendly terms until the end of his life.

The time at RTL ended quickly, as the moderators were not allowed to play their own records or to enter into their own advertising contracts. It was followed by the commitment to the European wave Saar of Saarland Radio . Heck pushed the German hit there, a segment unpopular among most presenters. His program Die Deutsche Schlagerparade was extremely successful, whereupon several hit records with his moderation appeared. Together with his boss, Heck also invented the Golden Europe in 1967 , a prize that honored German singers.

The music that Die Deutsche Schlagerparade played did not appeal to the radio and television director of Saarland Radio Truck Branss . But he was impressed by the two million listeners. So he offered Heck a TV show. The two came up with a concept and sent it to Saarland Broadcasting. He was not interested in a TV show, while the ZDF entertainment manager agreed. As a result, from 1969 to 1984 Heck presented the ZDF hit parade a total of 183 times (excluding special editions) . After initial criticism from the media, the ZDF hit parade quickly established itself as one of the most important music programs of the 1970s and 1980s.

In the course of the program reform, the ZDF announced that it would discontinue Heck's entertainment and benefit programs ( the summer hit festival , melodies for millions ). The contract with Heck, which expired at the end of 2007, was not extended. On November 18, 2007, after 38 years and exactly 11 months, the presenter announced his resignation from the stage and said goodbye to his audience.

ZDF honored him on December 19, 2007 with a surprise show under the motto “Thank you, Dieter Thomas Heck!” On his 70th birthday, hosted live from Berlin by Johannes B. Kerner . There were many artists who appeared in the ZDF hit parade at Heck, including Costa Cordalis , Bernd Clüver , Udo Jürgens , Paola and Rolf Zuckowski .

From 1994 to 2007, Heck presented the successful charity gala Melodies for Millions for the benefit of the German Cancer Aid . In 18 editions of the show, a total of more than 50 million euros was collected for the fight against cancer in Germany. The aid organization paid tribute to the deceased in an obituary in 2018: “With his outstanding commitment to people with cancer, he was closely associated with the German Cancer Aid. During his broadcasts, he spoke empathetically and openly with cancer patients about their fate in numerous conversations, but also gave them hope thanks to advances in research and medicine. "

Gravestone on the south-west cemetery Stahnsdorf

Heck was the presenter of Hundert, 6 , one of the first two private radio stations in Berlin. The Golden Tuning Fork Prize, awarded from 1981 to 2007, was initiated by him.

In 1970, Heck played the show master in the widely acclaimed television game Das Millionenspiel . As an actor, he appeared in guest roles in television crime series such as B. Tatort and The Rosenheim Cops or in the previous evening series Praxis Bülowbogen .

From 1982 to 1989 he hosted the programs Gute Laune aus Südwest and Vom Telefon zum Microphone on SWF1, as well as the program Start ins Sonntag for Bayerischer Rundfunk 13 Jahre . He was the first patron of the “ Tag des Deutschen Schlagers ” ( German Schlager Day ) (2009).

Heck was an avowed CDU supporter and often took an active part in election campaign events. Heck made a donation of 10,000 DM to Helmut Kohl , who tried to compensate the CDU for the damage caused by the black money affair in 2000 . He was also committed to animal welfare and was a member of the German Language Association .

In his private life he collected Borgward vehicles , for which he had worked as a salesman himself, and was an honorary member of an interest group for Borgward classic cars .

Dieter Thomas Heck divorced his first wife Edda Heckscher († 2000) in 1974. There are two sons from this marriage. In 1976 he married Ragnhild Möller. The couple had a daughter. Until 2009 he lived at Aubach Castle in Lauf in Baden-Württemberg for a total of 23 years . After that he had his domicile in Brunnen in Switzerland and in Águilas in Spain . Heck was a heavy smoker before giving up cigarette smoking in 2005. Heck suffered from the chronic lung disease COPD . He died on August 23, 2018 at the age of 80 in a Berlin hospital. His grave is on the south-west cemetery in Stahnsdorf . His younger brother Peter Heckscher died on September 28, 2018 at the age of 73.