The title of this article is ambiguous. Further meanings are listed under Hans Rosenthal (disambiguation) .

Hans Günter Rosenthal ( April 2, 1925 in Berlin - February 10, 1987 ibid) was a German entertainer , moderator , director , department head for entertainment at RIAS and a member of the board of directors of the Central Council of Jews .

Rosenthal grew up in a Jewish family in Berlin-Prenzlauer Berg ( Winsstrasse 63) and experienced the growing anti-Semitic persecution by National Socialism as a child . His father Kurt Rosenthal (November 20, 1900 - September 17, 1937) died of kidney failure after he had recently been released from Deutsche Bank as a " non-Aryan " . His mother Else Rosenthal née Isaac (March 10, 1899 - November 8, 1941) succumbed to cancer ( colon cancer ). After his mother's death, Rosenthal and his brother Gert (July 26, 1932 - October 22, 1942) went to a home for orphans and were given the compulsory name Hans Israel Rosenthal . His brother was deported to Riga on October 19, 1942 on an eastern transport and murdered a few days later in the Majdanek concentration camp . Other relatives were also murdered in the Holocaust .

Hans Rosenthal was initially in a Jewish training camp ( Hachschara ) in Jessen near Sommerfeld in Lower Lusatia. After it was banned, the National Socialists used him for forced labor from 1940 ; Among other things, he worked as a grave digger , on behalf of the Neuendorf Landwerk near Fürstenwalde / Spree , and later as a pieceworker in a sheet metal packaging factory in Berlin-Weißensee and Torgelow .

From March 27, 1943, he went into hiding in the Berlin allotment garden “Dreieinigkeit” ( Lichtenberg district , today Berlin-Fennpfuhl district ) and survived in hiding until the end of the war. For him, the capture of Berlin-Lichtenberg by the Red Army on April 25, 1945 meant the liberation. He was supported by three non-Jewish women from Berlin, Ida Jauch (1886–1944), an acquaintance of his mother, and later by Maria Schönebeck (1901–1950) and Emma Harndt (1898–1977). Ida Jauch was honored posthumously as Righteous Among the Nations on October 10, 2015 in the presence of her and Rosenthal's relatives .

He described these and other private and professional experiences in his autobiography published in 1980 under the title Zwei Leben in Deutschland .

Hans Rosenthal died of stomach cancer in 1987 and was buried in an honorary grave of the State of Berlin at the Jewish cemetery in Heerstrasse in the row of honor in field I.

In 1945 Hans Rosenthal trained at the Berliner Rundfunk , where he then worked as an assistant director and supervised the first radio play Nathan the Wise . For a time he was also active on the works council of the Berlin broadcasting company, but this increasingly led to conflicts with the supervisory bodies of the Soviet- controlled broadcasting corporation. Therefore, Rosenthal went to the western sectors in 1948 and switched to RIAS , where he started his broadcasting career as a production manager and entertainment editor. He eventually became one of the most popular German quiz masters of entertainment programs on the radio .

At RIAS Berlin, he designed advice and entertainment programs between the 1950s and 1980s, most of which he also designed himself. These include Alone Against All , Who Asks, Wins , Little People - Big Class , The Sounding Sunday Puzzle , Fun Must Be , Grandpa's Schlager Festival (in a double conference with Günter Neumann ), You are speechless , Ask me what , The flashback and Günter Neumann and his islanders (initially as a unit manager, later as a director) and play across borders . In 1962 he became head of the entertainment department at RIAS.

Two radio series founded by Rosenthal continue to run on Deutschlandradio Kultur . It is the Sunday puzzle series (formerly Das Klingende Sonntagsrätsel ), which is broadcast on Sundays, and the city quiz Alone Against All , which is broadcast once a month as part of the From the archives series .

Although Rosenthal's field of activity in radio and television was mainly concentrated in Germany, he has also produced some programs abroad: as early as 1966 he staged the program Fun Must Be at the Paris Theater in London (recording July 11, 1966) on the occasion of the football World Cup (a Coproduction between the BBC - Deutschsprachiger Dienst and the RIAS, SFB , NDR and SDR ), it followed from the Swiss hall in Tondern / Denmark Who asks, wins (recording April 11th 1970) and must be fun from the Brucknerhaus in Linz / Austria (Recorded on November 10, 1984) as well as two broadcasts each year by Dalli, Dalli from Vienna. A broadcast planned by him in Israel did not take place due to his untimely death.

In 1968, Rosenthal bought airtime by the hour from a radio station in Tenerife and produced a German-language program under the name DTF - German-speaking tourist radio with the aim of marketing advertising tailored to German tourists. The project failed after a few months with a personal loss of around 35,000 D-Marks because there were no advertisers. 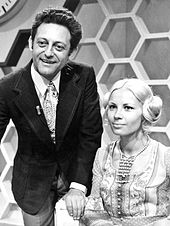 As early as 1955, with an adaptation of the radio series Who Asks Wins, Hans Rosenthal made his first appearances as a television quiz master. In 1960 he was head of entertainment at Bavaria Film for a year . He achieved lasting success on TV, inter alia. with Well asked is half won , Dalli Dalli as well as a guess with Rosenthal , KO OK , Everything with music , One plus one against two , Do you remember? , Asked - How - Won , seh'n time what awaits us , Quiz Parade , Hans Rosenthal presents , train to train , Please checkout and the Schlagerfestival the 20s (in Doppelconference alternating with Axel von Ambesser and Theo Lingen ) in the ZDF .

In 1983, Rosenthal tried on the ARD show That's Only One Time - Notes that have been banned (book: Curth Flatow ) to process the era of National Socialism in an entertainment program. Here he showed in a pointed conference that, in addition to his versatile work as a quiz and show master, he had also designed and directed political cabaret programs for many years. His final conference at that time read: "It all started 50 years ago, and we can all only hope that this past has no future!"

Rosenthal achieved particular fame with the moderation of the ZDF program Dalli Dalli and his recurring question to the audience “You think that was ...?”, Whereupon the audience always enthusiastically shouted “Great!”, While Rosenthal one - on TV briefly "frozen" - performed a jump in the air, which became his trademark.

Rosenthal has been involved in the Central Council of Jews in Germany since the 1960s , from 1973 as a member of its board of directors, in the Jewish community in Berlin and in various social projects. His favorite holiday resort was Utersum on Föhr , of which he became an honorary citizen .

From 1965 to 1973 the soccer fan was also president of the tennis Borussia Berlin soccer club . The "Prominenten-Elf", who worked in this association and co-founded by him, has been called "Hans-Rosenthal-Elf" since his death and collects money for the Hans-Rosenthal Foundation "Rapid Help in Acute Need e. V. " 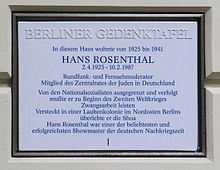 The Hans-Rosenthal-Foundation was established after Rosenthal's death in 1987 to continue the work of Dalli-Dalli helps : to support people who got into need through no fault of their own. The foundation is financed through donations, bequests and events. The founders included Traudl Rosenthal, Gert Rosenthal (* 1958, Rosenthal's son), ZDF, Bernhard F. Rohe (Director of RIAS Berlin), the Jewish Community of Berlin , Peter Bachér (Ed. Hörzu ) and Peter Schiwy .

The winners of the Hans Rosenthal Prize, endowed with 10,000 euros, are: