This article describes the local community Dudenhofen in Rhineland-Palatinate. For the Dudenhofen district of Rodgau, see Dudenhofen (Rodgau) .

Dudenhofen is a municipality in the Rhein-Pfalz-Kreis in Rhineland-Palatinate . It is the administrative seat of the Römerberg-Dudenhofen community . Dudenhofen, which has around 6000 inhabitants, is designated as a basic center according to state planning .

Dudenhofen lies in the Rhine plain in the Palatinate region . The municipality borders the city of Speyer to the east . The Speyer forest extends to the north of the district . The large cities of Ludwigshafen am Rhein and Mannheim are about 15 kilometers northeast of Dudenhofen. Dudenhofen also includes. the residential areas Atzelhof, Falkenhof, Ruppertsäckerhof, Waldhaus and Zwölfmannsgarten. Neighboring communities are - clockwise - Schifferstadt , Speyer, Römerberg , Harthausen , Hanhofen and Böhl-Iggelheim .

Both the Speyerbach and its tributary Woogbach flow through the middle of the settlement area. The Hainbach passes under the former and flows as Krebsbächel into the Woogbach.

In 1156 Dudenhofen was first mentioned in a document by Friedrich Barbarossa in the spelling "Tutenhoven". The current spelling has been proven since 1392. Finds in the area around Dudenhofen show the remains of settlements from Roman times and the time of the Franconian conquest of the land , so that the founding of the settlement at the time of the documentary mention was certainly several centuries ago. The burial gift of a Franconian tumbler is attributed to the 8th century AD.

974 was founded by Emperor Otto II. The jurisdiction of the towns of Speyergaus on which the settlement is to be expected due to their proximity to the town of Speyer, the Diocese of Speyer assumed. Until the dissolution of the existing rule in 1797 through the annexation to the French Republic , Dudenhofen belonged to the Speyer bishopric and was there at last under the Deidesheim office . This affiliation was not always undisputed, since its political independence in 1294, the city of Speyer claimed sovereignty over Dudenhofen, but never tried to enforce this claim.

From 1798 to 1814, when the Palatinate was part of the French Republic (until 1804) and then part of the Napoleonic Empire , Dudenhofen was incorporated into the Canton of Speyer and had its own Mairie . In 1815 the place had a total of 700 inhabitants. In the same year it was added to Austria . Just one year later, Dudenhofen, like the entire region, moved to the Kingdom of Bavaria and its Rhine district . From 1818 to 1862 the community belonged to the Landkommissariat Speyer ; from this the district office of Speyer emerged.

From 1939 the place was part of the district of Speyer . After the Second World War , Dudenhofen became part of the then newly formed state of Rhineland-Palatinate within the French occupation zone . In the course of the first Rhineland-Palatinate administrative reform , the place moved to the district of Ludwigshafen am Rhein , which has been called Rhein-Pfalz-Kreis since 2004 . In 1972 Dudenhofen became the seat of the newly created association of the same name . The place has been part of the Römerberg-Dudenhofen community since 2014 .

The municipal council in Dudenhofen consists of 22 council members, who were elected in the local elections on May 26, 2019 in a personalized proportional representation, and the honorary local mayor as chairman.

The honorary local mayor is directly elected for five years. Peter Eberhard (CDU) has held office since 2009. He was replaced by Jürgen Hook (SPD) in 2019. 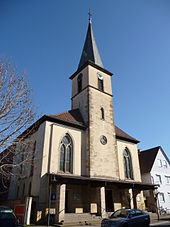 There are a total of eleven objects on site that are listed , including the St. Gangolf Church .

The nature reserve Woogwiesen extends partly over the municipality area. The only natural monument on site are the horse chestnuts with stone cross and plant . There is also a 97 hectare area within the community that has been declared a DBU natural heritage area.

From 1921 Dudenhofen owned a station on the 1956 disused local line Speyer – Neustadt . In the meantime, the bus line 507 operated by PalatinaBus runs through the town and creates a connection to Neustadt and Speyer. Bundesstrasse 39 and Landesstrasse 537 run right through the town .

As the seat of the association , Dudenhofen is home to its administration. There is also the regional school Dudenhofen / Römerberg on site .

Dudenhofen is known for its cycling track , called the "bathtub". Since 2000 this has been the venue for the international four-lane tour . The FV Dudenhofen also exists on site .

The only children's hospice in Rhineland-Palatinate is located in Dudenhofen. An extension was inaugurated in 2015.

The PWV hut Im Bolig, inaugurated in 2005, is located on the eastern edge of the settlement area . The From Rhine to Wine cycle path and the Franconia-Hesse-Kurpfalz long-distance hiking trail marked with a red cross also run through the municipality .

Daughters and sons of the church

Cities and municipalities in the Rhein-Pfalz-Kreis