Águilas is a Spanish port city on the Costa Cálida in the autonomous region of Murcia . The city is 105 kilometers from Murcia and 75 kilometers from Cartagena and borders the province of Almería . The municipality includes around 28 kilometers of Mediterranean coastline .

Already in Roman times there was a settlement called Aquilae, later Aquila, in the area of ​​today's Águilas. The actual city was founded by King Charles III of Spain . in 1766. At the beginning of the 19th century, the systematic exploitation of iron, lead and silver deposits around Águilas began. A Scottish immigrant, the merchant John Gray Watson, ensured that Águilas received the first football stadium in Spain in 1896 . Águilas gained importance at the end of the 19th century as the Spanish seat of the British railway company The Great Southern of Spain Railway Company , which received the concession for a rail connection between Águilas and Lorca in 1874 . Later she set up connections to Murcia and Granada .

The most important branches of the economy are tourism , intensive vegetable growing in greenhouses, and the construction and real estate industries . 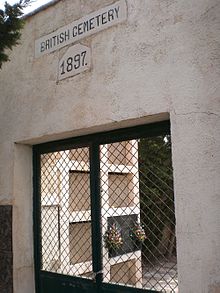 Entrance to the British cemetery

The Castillo de San Juan is a fortress that was built in the 18th century to protect against pirate attacks . It towers 85 meters above the southernmost point of the old town.

Much less well known is the Castillo de Tébar , which is located about 12 kilometers north of the city limits at an altitude of 490 meters above sea level. The fortress ruins date from the 12th century. The tower that still exists today was once 15 meters high. Today a 7 meter high ruin remains. The tower contains loopholes for muskets. One of the main functions of the Castillo was to report pirate attacks to the garrison in Lorca. Due to its exposed location, the fortress was well suited for this. The low level of awareness of the Castillo de Tébar is due to the lack of tourist development of the ruins. There is currently no way to the remains of the fortress.

The British cemetery commemorates the time of the British railway workers, about whose activities the Railway Museum ( Museo del Ferrocarril ) provides information.

The Football Museum ( Museo del Futbol Aguileño ) shows devotional objects from the more than one hundred years of football history in Águilas.

In 2002, the Mardi Gras Museum ( Museo del Carnaval ) was opened in Aguilas , in which, among other things, a large number of costumes from the various carnival associations are presented.

Águilas is holiday or winter residence for numerous northern and central Europeans, especially from Great Britain, Germany and the Netherlands. 5409 foreigners have their primary residence in Águilas. More than half of them are citizens of the European Union, including 404 Germans and 379 British. Among the prominent Aguilenes by choice were the television presenter Dieter Thomas Heck , who lived in the Calabardina district, and the German icon artist Klaus Richter with a studio and a gallery. Águilas is the editorial office of the German-language weekly newspaper Costa Cálida Nachrichten.

Cities and municipalities of the Murcia region