The title of this article is ambiguous. Further meanings are listed under Lorca (disambiguation) . 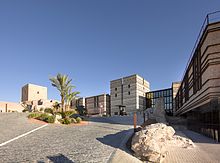 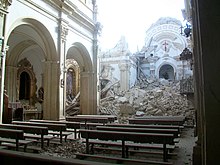 Iglesia de Santiago was destroyed in the 2011 earthquake 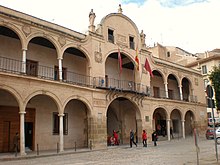 Lorca is a southern Spanish city ​​and a municipality ( municipio ) consisting of the city and several villages and hamlets (pedanías ) with a total of 94,404 inhabitants (as of January 1, 2019) in the Murcia region . The old town center is recognized as the conjunto histórico-artístico . In 2011 a strong earthquake devastated large parts of the city, some of the consequences can still be seen today.

The city of Lorca is located on an approx. 340 m high hill on the Río Guadalentín between Murcia (approx. 70 km to the northeast) and Almería (approx. 115 km southwest). It is around 30 to 40 km to the beaches on the Mediterranean coast, some of which are part of the municipality. The climate in winter is temperate, while in summer it is warm to hot; the low amounts of precipitation (approx. 310 mm / year) fall - with the exception of the almost rainless summer months - distributed over the whole year.

The continuous increase in population is mainly due to the ongoing immigration from the rural communities in the area.

Lorca has always been the center of a large growing area for barley and wheat as well as for almonds and olives. Intensive pig and cattle breeding have also played an important role for a long time. Since the second half of the 20th century, domestic tourism has been added.

In prehistoric times the area was settled by Iberians of the Bronze Age El Argar culture . In Roman times the settlement was called Eliocroca ; it then came under Visigothic rule, after the storm of the Moors it belonged to the Todmir Empire until 756 and then came under the rule of the Arabs, who called the city Lurka . Today's old town with its winding streets dates largely from the Moors. As part of the Christian reconquest ( reconquista ) , the Castilians came under Alfonso IX. (r. 1188-1230) to Murcia and conquered Lorca in 1224. Because of its border location with the Sultanate of Granada, the place remained fought for a long time, as evidenced by the torre alfonsina named after Alfonso X. as an important fortification of the city to this day.

In the 18th century a number of baroque churches were built in the city, the new quarters of which with their square layout contrast with the narrow old town. In April 1802 the dam at the dam of Puentes , which was built from 1775–1785, devastated the Barrio de San Cristobal district; over 600 people were killed. A few years later, Napoleonic troops moved in and were driven out again in 1812. Industrialization brought the connection to the railroad without significantly changing the small town character of Lorca.

On May 11, 2011, several earthquakes with a magnitude of 5.1 and 4.5 occurred in southern Spain , in which Lorca was severely affected (see Lorca earthquake 2011 ). At least nine people died. The cause was the extraction of groundwater.

Cities and municipalities of the Murcia region