from Wikipedia, the free encyclopedia
This is the spotted version , flagged on November 1st, 2020 . There are 3 pending changes that have yet to be viewed. 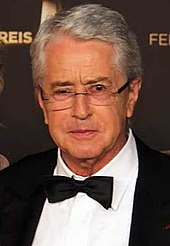 Frank Elstner (born April 19, 1942 in Linz , Austria , actually Timm Franz Maria Elstner ) is a German radio and television presenter who significantly influenced the programming of Radio Luxemburg in the 1960s and 1970s , as well as showmaster and developer of television shows . In 1981 he invented Wetten, dass ..? one of the most successful television shows in Europe.

Elstner was born as the child of actors Erich Elstner and Hilde Engel-Elstner in Linz on the Danube and grew up in Baden-Baden and Rastatt . He attended the Ludwig-Wilhelm-Gymnasium in Rastatt until he was expelled from school. At the age of 14, he switched to the Markgraf-Ludwig-Gymnasium in Baden-Baden. As a child he was an acolyte . He was also active in the DPSG . Elstner made experiences with the radio medium at an early age when he participated in radio plays for Südwestfunk . So he spoke z. B. in 1950 the Bambi in a radio play production. His wish to study theater studies in Freiburg , he could not realize because of the failed Abitur .

Elstner became known from 1964 as a speaker, chief spokesman ( moderator ) and later also as program director of the Four Happy Waves of Radio Luxembourg (until 1983). Since the speakers of Radio Luxemburg only worked under a first name and there was already a speaker by the name of Tom, Elstner was asked to choose a different first name instead of his real first name in order to avoid confusion. So he decided on his brother's name, Frank. Frank's most popular programs, which became the station's figureheads, included the Sunday hit parade , The Big 8, and the Luxembourg Funkkantine , broadcast on weekdays , which he presented together with other presenters such as Dieter Thomas Heck , Jochen Pützenbacher and Helga Guitton . Gerd Bacher from ORF brought Elstner, who was then an expert on youth radio, to Vienna as a consultant for the development of Ö3 .

Elstner's television career began suddenly in the Basic Law! - Stories from Adorf , broadcast from 1964 to 1968, where he appeared as an actor in one episode or another. He became known with Spiel ohne Grenzen , which he took over from his former boss at Radio Luxemburg, chief spokesman Camillo Felgen . The Monday Painters followed in the 1970s .

In 1981 he invented Wetten, dass ..? , which is still considered the most successful television show in Europe. He moderated the show a total of 39 times from 1981 to 1987, then handed over the moderation to Thomas Gottschalk . For the summer broadcast of Wetten, dass ..? on Mallorca on June 18, 2011 Elstner took over the moderation of a bet at the end of the show. At the end of the 212th edition of Wetten, dass ...? In April 2014, Gottschalk's successor, Markus Lanz , announced that the program would be discontinued at the end of the year after three more issues. In the last broadcast, Elstner and Gottschalk should appear as guests of honor. This was later canceled by ZDF.

BUT HELLO! on October 5, 1993: Elstner in an interview with fire service world champion Franz-Josef Sehr

Elstner developed other show formats for ZDF . He interviewed 138 Nobel Prize winners for the television program Die silent Stars . When the ratings from nose ahead and Elstner and the detectives fell short of expectations, he turned to RTL television, including. with the German version of the quiz show Jeopardy! . In addition, he hosted Aber Hallo on RTL in the 1990s . In his company Elstnertainment Elstner developed broadcast formats that he offers to both public and private television channels.

Lately Elstner has mainly worked for Südwestrundfunk , in whose third television program he moderated the Saturday evening talk show People of the Week until October 2015 . From September 28, 2002 to November 21, 2009 he presented as the successor to Cherno Jobatey Do you understand fun? in the ARD program Das Erste . On the last broadcast he introduced his successor, Guido Cantz . He also moderated the show Einfach Millionär of the ARD television lottery Ein Platz am Sonne until the beginning of 2005 and announced the weekly winners of the ARD television lottery on Sunday evenings just before Lindenstrasse until May 2011 .

From 2006 to 2008 Frank Elstner presented the quiz show The Best in the Southwest on Südwest-Fernsehen . He also moderates together with the science journalist Ranga Yogeshwar for ARD The Great Show of Natural Wonders . For the ARD television lottery he also moderated The incredible animal quiz until the end of 2011 . On February 4, 2009, he presented the award ceremony for the Golden Camera held at a press conference . On the occasion of the Eurovision Song Contest 2011 , Elstner performed an episode of the show for Germany in the evening program of the ARD .

In 2014 Elstner was a guest actor in the music video for Dream of Cro .

In recognition of his life's work and in honor of his upcoming 75th birthday, the ARD honored Frank Elstner on April 8, 2017 with the full-length show Top, die Wette sein! . This was moderated by Kai Pflaume .

Elstner was a member of the 15th Federal Assembly and took part in the election of the German Federal President on March 18, 2012 for the CDU .

Since April 2019 Elstner has hosted the YouTube show “Wetten, dass das Was ...?”, In which he interviews celebrities. In November 2019 it was announced that the talk show would move to Netflix in 2020 . For the first five episodes on Netflix, he interviewed Klaas Heufer-Umlauf , Joko Winterscheidt , Lena Meyer-Landrut , Charlotte Roche and Daniel Brühl . Further episodes with Jan Böhmermann , Herbert Grönemeyer , Helene Fischer and Giovanni di Lorenzo appeared on YouTube .

Frank Elstner is married to Britta Gessler for the third time and is the father of five children, including the young actress Enya Elstner . He lives in Baden-Baden . Due to a congenital malformation of his right eye ( microphthalmia ), Elstner has been wearing an eye prosthesis since he was 20 years old . In 2019 he made his Parkinson's disease public. His son Thomas Elstner is the managing director of the Berlin production company Zoo Agency .

1979 Elstner received the Cross of Merit on Ribbon of the Federal Republic of Germany. In 2000 he was voted Upper Austrian of the Century in the Show category . In 2006 he was inducted into the Hall of Fame of the Rose d'Or . The occasion is the 25th anniversary of his greatest success Wetten, dass ..? On May 25, 2007, the Bavarian Prime Minister awarded him the honorary award of the Bavarian Television Prize for his life's work . In April 2009 Frank Elstner received the Baden-Württemberg Medal of Merit . In October 2012 he received the Honorary Prize of the Donors of the German Television Prize at the presentation of the German Television Prize 2012 in Cologne. In March 2013 Frank Elstner was awarded the Gold Medal of Honor of the City of Baden-Baden for his services to entertainment. In January 2015 he was awarded the Saumagen Order .

On October 25, 2015, Frank Elstner was awarded the Order of the Ear of the Civil Society Cologne from 1863 in Cologne, presented by the chairman of the civil society Michael Melles. The Ear Order, designed and donated by the German sculptor Kurt Arentz , who died in 2014 , has been awarded annually since 1991 to people who “have their ear on the pulse” and who make or have made special social and social contributions in different ways. The first holder of the order is Hans-Dietrich Genscher . In June 2017, Elstner was awarded the Order of Merit 1st Class of the Federal Republic of Germany by Prime Minister Winfried Kretschmann . He is also a holder of the Luxembourg Order of Merit (Chevalier).

In September 2019, at the age of 77, Elstner received the YouTube Golden Camera Digital Award in the “Best Newcomer” category.