The Palatinate Ludwig Railway Company was a railway company founded in 1844 in the Kingdom of Bavaria . The company planned and operated the Palatinate Ludwig Railway between Ludwigshafen (still called Rheinschanze in the project planning ) and Bexbach in the Palatinate (Bavaria) . In particular, the railway line was intended to transport Saar coal from the Bexbach area to the Rhine and from there to the emerging industrial centers in southern Germany and Switzerland.

On March 30, 1838, the Bavarian Railway Company of the Pfalz / Rheinschanz-Bexbacher-Bahn was founded in Speyer . Before that, around 250 railway shareholders had met at the General Assembly on March 5, 1838, chaired by the District President Karl Theodor von Wrede , to discuss the statutes of the future company. The subscriptions for the building capital were limited to 4.5 million guilders. In the same year, on April 19, the new company received the license to build and operate the railroad with the royal concession. This is still an important part of the connections through the Palatinate from east to west . Several years have now passed with discussions between domestic and foreign interest groups and technical reports about the optimal route.

The first board of directors of the railway was elected on September 23, 1844 by the administrative board and had its seat in Speyer. It consisted of Paul Denis as a railway engineer, the Land Commissioner of Kaiserslautern Maximilian Joseph von Lamotte , as railway director, Albert von Jäger as sub-director as well as an accountant and a secretary. In 1845, the chief engineer Anton Bruckner († 1847) was added as the person responsible for railway construction and the machine master Eugen Mündler. After the line went into operation in 1849, the head office was relocated from Speyer to Ludwigshafen . 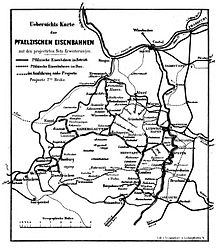 Lines of the Palatinate Railways as of 1870

It was only with the appointment of Paul Denis to the board of directors that the actual construction phase of the company, now renamed the Palatinate Ludwig Railway, began. After the revision of the leveling by Messrs Denis and Hummel, construction began in April 1844 at the same time on the Rheinschanze, in Neustadt (at that time still "an der Haardt"), Kaiserslautern and Homburg . From the beginning, the route was designed to have two tracks, but only one of them was built. As early as September 1847, the Rheinschanze – Schifferstadt – Neustadt lines and the Schifferstadt – Speyer branch line projected at the behest of King Ludwig I were completed and put into operation. In August 1849, the entire line to Homburg and from there to Bexbach was in operation. The line was expanded to two tracks by 1856.

The workshops in Kaiserslautern , Ludwigshafen and Neustadt developed into railway depots.

The connection to Saarbrücken

After the construction of the Prussian connecting line Saarbrücken-Bexbach , trains with Saar coal started rolling directly from Saarbrücken via Bexbach to Ludwigshafen on November 15, 1852. In this way, the Saarkohle found access to the markets in Baden, Alsace and Switzerland. While only about 18,730 tons of coal had been shipped in 1851, in 1858 it was already 837,890 tons.

The connection to Hessen

In 1844, interested parties from Mainz sent a request to the President of the Palatinate government to continue a railway planned from Mainz to Ludwigshafen from the Hessian border to Ludwigshafen. This company received the concession from the Hessian Grand Duke on August 15, 1845 and founded the later Hessian Ludwig Railway Company . The gap between Ludwigshafen and Bobenheim (Worms border) , which was necessary from the Palatinate side , was established on March 14, 1853 with an initially single-track line. This made it possible to travel from Mainz via Ludwigshafen, Neustadt, Bexbach and Saarbrücken to Paris. And through the Rhine Trajekt in Mainz-Kastell there was a connection to Frankfurt am Main. An express train connection to Paris was set up from Frankfurt, with a route via Mainz-Ludwigshafen-Neustadt-Kaiserslautern-Saarbrücken-Forbach-Nancy, in 1854 it ran three times a day and took 17.5 hours for the outward journey. In 1860 the Ludwigshafen-Worms line was expanded to two tracks.

The connection to Baden, the first bridge over the Rhine

View of the Rhine bridge Ludwigshafen-Mannheim around 1905

From January 1863, a train company in Ludwigshafen established the connection to the Baden State Railways with a daily capacity of around 200 cars. This temporary arrangement, the production of which cost a total of 28,896.57 guilders, was replaced on February 25, 1867 by a permanent bridge over the Rhine. The plan for the bridge had already been drawn up in a joint meeting of delegates from Baden and Bavaria in July 1862. Disagreement about the connection of the tracks to Mannheim station delayed planning until 1864. After approval by the Rhine Shipping Commission, the construction project began in February 1865. The complete construction costs amounted to 1,828,630 guilders. After a tender, the work for the bridge was awarded, namely

All of the stone material required for the construction was supplied by the Palatinate railway administration - reddish stone from quarries near Kaiserslautern, Schopp and in the Neustädter Tal as well as yellowish stone for the portals from Deidesheim and Dürkheim.

From Homburg to Zweibrücken

As early as 1844, a committee in Zweibrücken had campaigned for the construction of a branch line from Homburg to Zweibrücken . In 1852 Paul Camille von Denis presented new plans and a cost calculation, according to which a good pension can be expected from the operation of this branch line. On August 16, 1853, the Bavarian King Maximilian II approved the formation of a stock corporation to build and operate this branch line. The call to subscribe for shares was unsuccessful, however, so that in 1855 the Ludwigsbahn - which had the right to build branch lines in its concession - jumped into the breach and took on the company. On April 5, 1856, the Palatinate Ludwigsbahn received the assurance of the state interest guarantee of four percent for 25 years, as it had already been given for the main line of the Palatinate Ludwigsbahn. Work began in June 1856 and operations opened on May 7, 1857.

From Speyer to Germersheim

Even Friedrich List had dealt in his essay "On the German railway question" with the theme of the Rhine railway. He came to the conclusion that on the left bank of the Rhine - i.e. the Vorderpfalz - there was a better place for such a railway, which could also improve trade towards southern Germany, Switzerland and Italy. Now that the Mainz-Ludwigshafen line with a connection to Speyer was completed, the project of a connection from Speyer via Germersheim to Baden came into play. Exceptionally, strategic reasons played a positive role here. In his memorandum The Strategic Importance of the Germersheim Fortress , Major General Joseph Hütz stated in 1860 that the Germersheim Fortress absolutely had to be connected to the German railway network. He recommended three short lines, namely from Germersheim to Bruchsal (connection to Baden with a Rhine crossing), to Landau (with connection to the Palatinate Maximiliansbahn) and the Speyer – Germersheim line . This line was then realized at short notice and put into operation on March 14, 1864.

From Homburg to St. Ingbert

This route has a long history. It actually began with the first planning for the Ludwigsbahn, when it had not yet been decided whether the route should run from Homburg to Bexbach or to St. Ingbert . After the decision on the route to Bexbach, the issue was not put on record again until 1856, when the Ludwigsbahn granted the concession for the Homburg – St. Ingbert was requested. The aim of this route was to get the coal from the Aryan mines and products of the St. Ingbert ironworks cheaply to Homburg by the shortest route. By contrast, the residents of the defended assemblies - and Würzbach tales, the route guidance on Blieskastel , Schwarzenacker and Hassel demanded. This was followed by a dispute that lasted for several years about the additional costs arising from this longer route and about whether and to what extent these could be covered by a higher freight tariff on the coal of the St. Ingbert state mine. However, this model was opposed to a state treaty of 1850 between Bavaria and Prussia, which obliged Bavaria not to distinguish between Prussian and Bavarian coal. In a declaration in November 1864, the management of the Ludwig Railway declared that it was ready to build the line under the following conditions:

The draft was presented to King Maximilian II on January 26, 1865. On February 13, 1865, the design was approved and construction of the line could begin. The stretch between Schwarzenacker and Hassel was completed on November 26, 1866, the rest of the stretch to St. Ingbert by June 1, 1867.

On January 1, 1870, the administration and operation of the Palatinate companies of the Ludwig Railway , Maximiliansbahn and Nordbahnen were combined as Palatinate Railways . With the consent of the shareholders to this contract, both the obligation to build further routes and a state interest guarantee of 4.5% on building and equipment capital for 35 years were connected. This was accompanied by the establishment of a new administrative structure. The legal status of the three companies remained unaffected. They continued to be the bearers of the respective route concessions and the associated interest rate guarantees from the Bavarian state. Further details on the development after 1870 can be found in the

On January 1, 1909, the Ludwigsbahn and the other companies belonging to the Palatinate Railways became the property of the Bavarian State Railways .

Extension of the line after 1870

Under the joint management, the following routes were built in the name and for the account of the Ludwig Railway:

The narrow-gauge lines of the Ludwigsbahn should also be mentioned here: