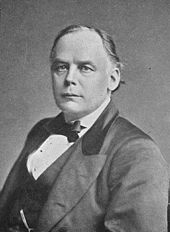 Charles Bradlaugh (born September 26, 1833 in London , † January 30, 1891 ibid) was a British politician , author and journalist . He was a radical free thinker and secularist .

Bradlaugh was born into a simple family, the son of a lawyer writer. At the age of 12 he became an errand boy, at 13 he was a clerk at a ship's loading bay . In his spare time he began to study primarily philosophical books and was thus familiar with the writings of the Enlightenment , especially Voltaire and Thomas Paines . From 1850 to 1853 he served in the British cavalry , then briefly tried his father's profession and also got by as a coal dealer and representative for suspenders.

Because of his increasingly radical beliefs based on the absolute freedom of the individual , which he freely expressed in public, Bradlaugh repeatedly came into conflict with superiors and the authorities. He held meetings, argued publicly, wrote scriptures ( A few words on Christian belief ) and soon became one of the most prominent atheists and free thinkers in London. First he wrote under the pseudonym Ikonoklast ("iconoclast"), from 1868 under his birth name. In addition, he continued his self- taught education , dealt with economics , law and history , learned French , Latin and Greek . An inheritance secured his material existence.

Bradlaugh first achieved notoriety through lectures in the style of freethinking , which he gave to groups that survived the disappearance of the Chartists and coming from the teachings of Robert Owens , were led to secularism under the influence of George Jacob Holyoake . In 1858, Bradlaugh succeeded Holyoake as President of the London Secular Society.

Bradlaugh soon published a large number of pamphlets, including the radical weekly The National Reformer since the 1860s , of which he co-authored and which, under his influence, devoted himself to atheism, republicanism and neo-Malthusianism ( contraception ).

While he gradually succeeded in making a living from the proceeds of his literary activity, his influence in the radical circles of London - at that time the intellectual center of European free-thinking - grew increasingly. In 1866 he devised and founded the National Secular Society and became its first president.

Bradlaugh, described by contemporaries as a charismatic figure, became president of the League of Freethinkers , repeatedly toured Italy and North America for propaganda purposes, and in 1871 went to politically troubled France to offer the Paris Commune and the government in Versailles - in vain - his role as mediator.

His friend and contemporary James Thomson (writer, 1834) (1834–1882) was significantly influenced by him in life and thought .

From 1874 to 1885 he worked closely with like-minded, friendly suffragette and radical freethinker Annie Besant : In 1876, a dealer from Bristol who sold books on freethinking and pornography was persecuted and imprisoned for calling them "obscene" current instructions Fruits of Philosophy on birth control by US doctor Charles Knowlton . Its publisher, Charles Watts, was the editor, printer and publisher of Bradlaugh and the father of the founder of the Rationalist Press Association . When arrested, Watts pleaded guilty to Besant and Bradlaugh's wishes. Bradlaugh then even fired him. Besant and Bradlaugh founded a Freethought Publishing Company and published their Fruits of Philosophy, after which they were arrested, tried and sentenced to six months in prison. However, they appealed and won due to legal formalities. While this process divided freethinking, it helped reduce the size of Victorian families.

Bradlaugh was also elected to the head of two other clubs he organized, the National Secular Society and the Land Law Reform League , in which Besant was also active.

The Bradlaugh Case and the House of Commons

Having twice in processes to products of its publishing was involved activity (u. A. Charge of blasphemy ), both times but the highest authority had been acquitted, he was in the spring of 1880 with the support of the Whigs and together with the journalist Henry Labouchère for Northampton to British House of Commons elected. Bradlaugh and Labouchère were considered liberal.

Since he the Christian founded oath refused, requested the Conservatives not to admit him as a member of parliament, and set in contrast to the liberal a decision by the government. When Bradlaugh turned up in the House of Commons anyway to exercise his mandate , he was arrested but released the next day. The Liberal Prime Minister William Ewart Gladstone brought about a new resolution that allowed Bradlaugh to take a religiously independent "pledge" instead of the oath; nevertheless, after that vow had been declared insufficient by a court order, he had to resign from the lower house.

In 1881 he was re-elected in Northampton, but at the request of Stafford Northcote, 1st Earl of Iddesleigh , he was not admitted to the oath and forcibly prevented from entering the House of Parliament.

During the next four years, Bradlaugh's attempts to force his entry into the House of Commons failed. Against the will of the Liberal government and the electorate of Northampton, the majority of the House of Commons was able to renew the Bradlaugh resolution annually to exclude the oath.

During the 1880s, Bradlaugh ceaselessly toured the country giving secular lectures and participating in debates. During this time he assisted the founder and editor of The Freethinker , George William Foote , in his defense of blasphemy, albeit unsuccessfully.

Alienation from Besant and last years

The friendly collaboration with Annie Besant had long since broken up: she had turned to socialist Fabianism , later to Helena Blavatsky's theosophy , from the mid-1880s, initially under the influence of George Bernard Shaw . The determined individualist Bradlaugh could not gain much from either.

However , they shared their commitment to the Indian national movement : In 1889 Bradlaugh took part in the annual congress of the Indian National Congress, founded four years earlier , after he had already supported the Indian national movement in previous years. Unlike Besant, however, he sympathized with a non-cooperative course directed against the British crown, such as Gandhi would later represent and lead to success.

Charles Bradlaugh, who had become a bourgeoisie towards the end of his life, spent his last years withdrawn in London. His funeral on January 30, 1891 was a major event with several thousand participants, including the young Mohandas Gandhi.