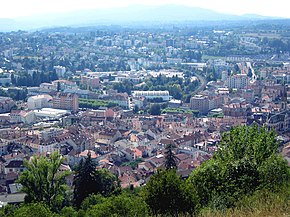 View of Voiron from Bois Joli

Voiron is a municipality with 20,108 inhabitants (at January 1, 2017) in the department of Isère in the region Auvergne Rhône-Alpes and is located in the southeast of France , about 23 of kilometers north-northwest prefecture Grenoble , 72 of the city km southeast Lyon and 100 km south-southwest of the City of Geneva (beeline). Voiron is bordered by the Massif du Vercors in the south and in the east by the Massif de la Chartreuse .

Various branches of industry are located in Voiron:

As a holiday region, Voiron has a lot to offer:

More than 40 years ago, in 1966, the city entered into a partnership with the German district of Herford and its nine municipalities in North Rhine-Westphalia . A partnership agreement followed in 1971 with Šibenik in Yugoslavia and in 1985 with Bassano del Grappa in the Italian province of Vicenza , Veneto .

During the Second World War , the surrounding Vercors Mountains were the stronghold of the French Resistance and the scene of bloody battles between French and Germans. At the scenes of the fighting there are plaques commemorating what happened and the victims of the " hereditary enemy " of that time .

Commons : Voiron  - collection of images, videos and audio files
Municipalities in the Arrondissement of Grenoble (A – O)