This article covers the parish of Sassenage. For further meanings, see Sassenage (disambiguation) .

Sassenage is a French commune in the department of Isère in the region Auvergne Rhône-Alpes . It is assigned to the canton of Fontaine-Vercors and the Arrondissement of Grenoble . 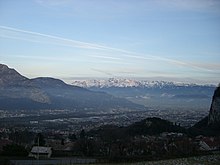 Sassenage at the foot of the Vercors massif

The city with 11,376 inhabitants (as of January 1, 2017) is located 6 kilometers northwest of Grenoble at the mouth of the Drac and Isère , at the foot of the Vercors massif.

The municipality also has an offshoot that extends on the slopes of the Vercors massif and is traversed by the Furon torrent . This hamlet is characterized by narrow streets and old houses. The Théâtre en Rond and the Park L'Ovalie are also located there . Parts of the municipality belong to the Vercors Regional Nature Park .

Reconstruction of an abri under the rock of Sassenage

The name Sassenage is derived from the Celtic cassanos , which means "oak".

The area was already settled during the transition period from the Mesolithic to the Neolithic . This epoch was marked by a marked warming and the renewed expansion of the forest. Traces of stone age camps have been discovered in Sassenage and the surrounding communities. It was prepared arrowheads from flint and other artifacts v up to the 8th millennium. BC and also at an altitude of 1500–2000 meters above sea level. Presumably humans invaded this habitat to hunt game. They gradually gave up nomadism in order to settle down. A Stone Age Abri was reconstructed in front of the Grande Rivoire grotto in Sassenage .

In the Middle Ages , the fiefs of the Lords of Sassenage spread across the Isère and Drac valleys. The rural population was obliged to pay taxes to them.

In 1827 the first paved road was opened that leads from Grenoble into the valleys of the Vercors massif. It also crosses the Furon gorges. After the Second World War the area opened up for tourism and the population of Sassenage began to grow rapidly, also due to the proximity of Grenoble. Today, a large part of the population lives from tourism, with hiking trails, cave hiking , rafting and canoeing and kayaking trips being offered.

A medieval legend tells that the caves of Sassenage were the dwellings of the fairy Melusine . After her flight from the Poitou , the creature - half mermaid , half siren - settled in a grotto of the Furon, where you can still see her stone table and basin, where she used to take a bath on Saturdays. The story that had already happened with the Count of Poitou is now repeated with the Seigneur von Sassenage: She seduces him, marries him and gives him a son. Later, her husband surprises her while taking a bath, whereupon Melusine announces the imminent death of all descendants of the dynasty and then disappears forever.

In the vicinity of this grotto is a well from which the farmers believed they could read the yield of the coming harvest.

Entrance to the caves

The caves of Sassenage, through which the Furon torrent flows underground, are called Cuves de Sassenage in French . They can be viewed on the first kilometer. In 1953, the entrance to the Gouffre Berger cleft was discovered in Engins and, thanks to an experiment with a degradable dye, it was proven that the Sassenage cave communicates with this cleft, which is considered to be the deepest manhole cave in the world. 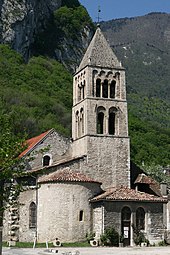 Sassenage has had two churches since the 11th century. The parish church of Saint-Pierre stands on the banks of the Furon and has housed the family grave of Duke Duc de Lesdiguières since 1822 , the other is called Église des Côtes and is on the way to the neighboring municipality of Engins. The Saint-Pierre church has been a listed building since 1930.

The castle was built between 1662 and 1669 by the architect Laurent Sommaire for Charles-Louis-Alphonse de Sassenage . It was the last domicile of the Lords of Sassenage, who, however, rarely stayed there. The castle and its gardens have been a listed building since 1942.

The Château des Blondes was built in 1722 on behalf of Dr. Antoine-Henri Ducoin built. For a long time it housed a non-profit institution that offered help to “disinherited daughters”. Later it developed into a factory for tips . In 1986 the building was acquired by the municipality and since 1988 it has served the city as Marie (town hall) and tourist office.

The castle Château de Beaurevoir (originally called Château de Beauregard ) was built in the Baroque style in 1880 by the glove maker Alphonse Terray (* 1847, † 1912 - he was the grandfather of the famous alpinist Lionel Terray ) .

The Théâtre en rond in flames

The Théâtre en rond is one of the most charismatic theaters in the Isère department. It was built in 1958 by the architect Maurice Blanc as a multi-purpose hall . It owes its name to its oval floor plan. The theater offers space for 360 spectators who are grouped concentrically around the stage like in an ancient amphitheater . It was renovated repeatedly for the first time in 1990 and 2004. During the construction work a devastating fire broke out on September 17, 2004, which largely destroyed the house, but the theater was reopened in 2008 in a new splendor. Today it is used for theater performances and music events, and it also serves as a ballroom and pavilion for exhibitions.

Municipalities in the Arrondissement of Grenoble (A – O)