This article deals with the mythical fairy creature . For other meanings see FEE . 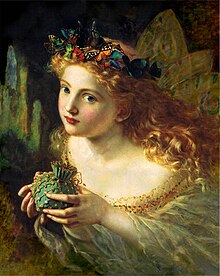 Fairies are after Roman and Celtic people say ghostly, gifted with higher forces mythical creatures , which can be both female and male. The term and name developed from the Roman goddesses of fate , the Fata (cf. Parzen ), lat. Fatua , Italian. Fata , Spanish. Hada , French. Fée . In the German poetry of the Middle Ages they appear under the name Feien or Feinen and are mythologically related to the so-called white women and the Norns . In the Slavic area they are known as Wilen , in the island Celtic as Sidhe .

Like the goddesses of fate, the fairies usually appear initially in the number three , occasionally in the number seven and twelve . They have the gift of making themselves invisible, they live in gorges where they make descending children happy with their gifts, and they appear with newborns, whose fate they determine. They are also asked to be godparents , they are given a seat of honor at the table, etc. Their close interweaving with fate can be explained by the fact that the French word fairy was originally derived from Latin, from fatua (fortune teller) and fatum (fate). But the word Fei , which comes from Romansh, could also have played a part in the naming, recognizable by terms such as Merfei and Waldfei . The word immune is also derived from Fei , which refers to invulnerability or invulnerability to the fairy sorcery.

Fairies are mostly described as cheerful, particularly beautiful and never aging, and also as bringing good luck. All this reflects that the fairies symbolize the good principle by their nature.

On the other hand, the fairies (especially in the Celtic folk tale) also appear as female elementals who live in forests, in rock grottos, at springs and waters, prefer to practice the dance, the trace of which is revealed by the so-called fairy rings (cercles des fées) , and not infrequently to be seen by mortals washing their linen .

It is quite certain that the idea of ​​the Parzen and the Matrones , the mother goddesses , was associated with those of the field spirits, the Campestres or Agrestes Feminae . All nymphs , dryads and the like were previously grouped together as field spirits . It is also certain that the names of the Latin writers of the Middle Ages for the fairies, names such as felices dominae , bonae mulieres or dominae nocturnae , were also applied to other figures from traditions, such as the wild women .

Fairies in poetry and literature

Even now, numerous legends and names of localities in the former and present residences of the Celts remind of the fairies. After the Crusades , the West with the Orient with Persians and Arabs dominant ideas of Peris and jinn had made known, then developed, preferably in conjunction with the Celtic performances, a literary -dichterische conception of the fairy kingdom, which over time to the single was trained. Template for this were u. a. the Celtic leprechauns (goblins, see Tylwyth Teg ).

The French novel Huon de Bordeaux , whose fable Christoph Martin Wieland used for his Oberon , is particularly important for knowledge of this fairy world, which had already received its poetic authentication in the saga of Lancelot from the lake . Since then the fairies have been part of the romantic poetry of Christian chivalry, and Torquato Tasso in his Liberated Jerusalem even attempted to bring these spiritual mediocre creatures of Christianity and paganism into poetic harmony.

According to the scenes painted by the poets, there were three fairy kingdoms in particular: Avalon , the legendary island where Morgana lived; an empire in the interior of the earth with magnificent palaces, which is most clearly described in the English novel Orfeo and Heurodis , and one in the wilderness and forests, namely in the great, legendary Brocéliande forest in Brittany. Numerous old castles are also named as the fairies' favorite places. Edmund Spenser , in his poem The Faery Queen in The Fairy Queen, allegorically glorifies the glory of Queen Elizabeth I.

Spenser's fairies are on the whole still those of the old romanticism , but later a distinction between them emerges with regard to their character. While the “good” fairies, named Esterelle , Maliure and Melusine , eternally beautiful and young, masters of all female arts, were good and noble and always used their magic powers for good, the “bad” ones, especially Karabossa , showed and Fanferlüsch belonged, the opposite of everything, and their power was not infrequently greater. Meanwhile, no fairy could undo what another had done, but only counteract it.

This fight between good and bad fairies usually forms the content of fairy tales , which, mostly of oriental origin, came on the agenda in Europe in the last quarter of the 17th century and became popular in France since 1681. Charles Perrault's Contes de ma mère l'Oye (1697) and Marie-Catherine d'Aulnoy's Contes des fées (1698) were so acclaimed that Antoine Galland came up with the idea of ​​converting the oriental patterns of the genus ( Arabian Nights ) into French to translate, and a lot of imitators tried their hand at this kind of poetry. The most excellent of the fairy tales can be found collected in the Cabinet des fées by Charles-Joseph Mayer (Paris 1785–1789, 41 volumes). The zeal of Nicolas Boileau and his students against these fairy tales did nothing to diminish the popularity of the genre. In Germany it was especially by Christoph Martin Wieland collection Dschinnistan made known to a wider audience. Finally, however, the supersaturation aroused disgust and Count Antoine Hamilton satirized in Contes the entire genre. In our time the fairies only appear in children's stories.

In the fairy tales of the Brothers Grimm , the fairies only play a sporadic role, especially in Sleeping Beauty . Unlike in Charles Perrault's Cendrillon , Grimm's Cinderella does not feature a fairy. In ETA Hoffmanns Klein Zaches called Zinnober the fairies are banished to nunneries by the enlightened sovereign. For Peter Pan , the fairy Tinkerbell is an important companion. Otfried Preußler's Kasperl succeeds in redeeming an enchanted fairy in the robber Hotzenplotz . A fairy plays a decisive role in Carlo Collodi's Pinocchio , and also in the cartoon series Mr. Rossi is looking for happiness . Fairies also play a central role in other cartoon series (such as Winx Club , whose offshoots Die Welt der Winx or Cosmo & Wanda - When Elves Help ).

Weather spirits were revered in various cultures, such as Stiefeli in German mythology , Attarabi and Mikelatz in Basque mythology , Sillagisertok in Greenland mythology or Qailertesang in Inuit mythology (see also weather god ).

The term weather fairy is also often used colloquially for a weather announcer .

Reception in film and stage works