Rockall is a rocky island in the northeast Atlantic with a diameter of 25 to 31 m and a floor plan of 784.3 square meters. It consists of granite and represents a relatively small block of thinned continental crust between the western edge of the European continental block and the North Atlantic Basin. As the highest point of this floe, it rises above sea level by an average of 21.4 m. Because of its location 407 km west of the Hebrides , Rockall is primarily of importance under maritime law . Hasselwood Rock is about 200 m north . 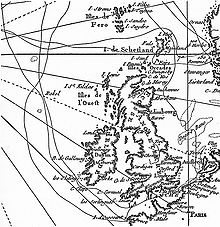 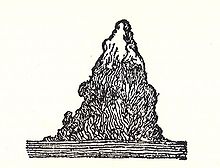 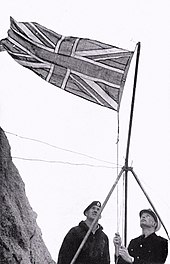 In 1606, an island called Rockall was noted on a map 90 kilometers from its actual position. The first known human "contact" probably took place in 1686, when a ship with Spanish and French on board was  shipwrecked here - or on the nearby Helen's Reef .

The approximately exact location of Rockall was first determined on July 8, 1810 by the crew of the Endymion . According to the usual representation, the island was first entered on this day through Basil Hall ; According to later research by the naturalist James Fisher , however, this visit did not take place until September 8, 1811. The position of Rockall identified by T. Harvey on the Endymion - 57 ° 39 ′ 32 ″ N, 13 ° 31 ′ 16 ″ W - is about eleven kilometers northeast of the actual position of the island.

At the end of the 19th century, Trinity House - the beacon administration for England - announced on request that it had never been assumed that Rockall was within the legal jurisdiction of the English beacon administration; At least up to this date, despite the known dangers to shipping, neither Rockall nor the nearby Helen's Reef had ever been provided with beacons, bells or barrels .

On June 28, 1904, the Danish passenger ship Norge ran aground on the shallows of Hasselwood Rock north of the rock island Rockall and sank within 20 minutes. 625 passengers and crew members drowned. It was the worst shipping accident in the North Atlantic to date.

On September 18, 1955, under the sign of the Cold War, Royal Marines soldiers and a civilian geologist entered the rock, hoisted the national flag of the United Kingdom and affixed a plaque to secure the United Kingdom's claim to the uninhabitable island. The aim was to prevent the Soviet Navy from observing British missile tests in the Hebrides by taking possession of the surrounding waters and the associated control . The occupation was officially announced on September 21, 1955 by the British Admiralty .

In 1969, large oil deposits were discovered in the vicinity of the rock in the Rockall Plateau and Rockall Trough areas . So far, however, they have not been exploited.

The United Kingdom declared the area around the rock its " exclusive economic zone " and claimed the sole right to exploit the natural resources . But Denmark (for the Faroe Islands ), Iceland and Ireland also lay claim to Rockall. Since the economic zone around an island covers up to 200  nautical miles and also includes fishing rights , this is of economic importance. In May 2005, talks between the four states about the future of Rockall took place in the Faroe Islands.

It is still unclear who now has the rights to extract oil . Until 1997 it was also disputed whether Rockall is simply an uninhabitable rock or a habitable island that would have an exclusive economic zone. To demonstrate the habitability of Rockall and Britain's claim, survival expert and former Special Air Service member Tom McClean lived on the rock for 40 days in 1985.

Before 1997, the UK position was that it was habitable. Meanwhile, it looks Rockall uninhabitable on, whereby a State party to maritime law instead of an exclusive economic zone, the concept of the continental shelf could apply to the area around Rockall, likewise only the territorial State may degrade natural resources on the one from which, however, in contrast to the exclusive economic zone not the Derive privileges relating to fisheries. 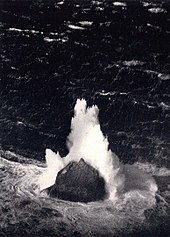 Dozens of meters of spray during a winter storm, March 1943

Greenpeace occupied Rockall for a short time in 1997 and protested against oil production by founding the Global State of Waveland . In February 1999 Knowhaus , the sponsor of this project, had to file for bankruptcy and thus temporarily ended Waveland's existence.

On June 16, 2005, the island was visited for the first time by an amateur radio expedition. In 3.5 hours, 262 calls were made under the callsign MS0IRC / p. After that, the action had to be canceled due to the weather.

Another amateur radio activation, this time by Belgian radio amateurs, succeeded on October 1 and 2, 2011. Under the callsign MM0RAI / p, radio amateurs ON4HIL and ON7YT operated Rockall for around 16 hours. The entire team included a total of seven radio amateurs, of whom only the two named activated the island.

In 2013, British adventurer Nick Hancock stepped onto the rock. In 2014, he was credited with the longest stay record after living in his RockPod on the rock island for 45 days . He is planning another stay, which will last 60 days. With his actions, Hancock raises money for charity.

Rockall is made of aegirine - riebeckite - granite that was formed in the Eocene period. Despite the difficulties in reaching the isolated rock needle in the North Atlantic, it has been geologically and mineralogically investigated several times by various scientists since the landing of Lieutenant Basil Hall, which was first documented in 1810, including in 1814 by the Scottish geologist John MacCulloch , and in 1897 by the British geologist and volcanologist John Wesley Judd , 1914 by Henry S. Washington , 1921 by the French mineralogist and geologist Antoine Lacroix , 1960 by PA Sabine and finally in 1975 by BR Young, JR Hawkes, RJ Merriman and MT Styles. The latter were able to detect the previously unknown mineral bazirite in the examined mineral samples from Rockall . The rock island is therefore also considered a type locality for this mineral.

In addition to bazirite, aegirine and riebeckite, the minerals albite , cristobalite , elpidite , leukophosphite , monazite and quartz could also be detected in the rock samples from Rockall .

Terence Hanbury White's 1957 novel The Master (German "The Ruler in the Rock") plays on Rockall. The Irish folk band The Wolfe Tones released the song Rock on Rockall in 1976 , with which they supported the Irish claim to the rock. Rockall is also a song by the Icelandic pop group Mezzoforte from 1983. On December 14, 2006, the first domestic wheat beer was introduced in the Faroe Islands . It is named Rock All based on the island and is brewed by Föroya Bjór . Rockall is also the name of a comet that hit the sea west of Ireland in the movie Comet Impact . In 2012 Rory and Calum MacDonald - members of the Scottish band Runrig - released the CD The Band From Rockall .