Thousand and one Night

The title of this article is ambiguous. Further meanings are listed under A Thousand and One Nights (disambiguation) .

A thousand and one nights ( Persian هزار و يک شب, DMG hazār-u yak šab , Arabic ألف ليلة وليلة, DMG alf laila wa-laila ) is a collection of oriental stories and at the same time a classic of world literature . Typologically, it is a frame narrative with story boxes .

A thousand and one nights by Gustave Boulanger (1873)

From the point of view of the earliest Arab readers, the work had the allure of the exotic , for them it comes from a mythical "Orient". The structural principle of the frame story and some of the animal fables contained therein indicate an Indian origin and probably date from around 250. An Indian model has not survived, but this also applies to many other Indian texts from this period. An Indian origin is assumed, but that the core of the stories comes from Persia cannot be ruled out. In addition, there were close ties between the Indian and Persian cultures at that time.

The Indian stories were probably translated into Middle Persian in late antiquity , under the rule of the Sassanids , around 500 AD and expanded to include Persian fairy tales. The Middle Persian Book A Thousand Stories ( Persian هزار افسان- hazār afsān ), the forerunner of the Arabic collection, has been lost, but is still mentioned in two Arabic sources from the 10th century. Some of the characters in the Arabian Nights also have real models from Persian history, for example the Sassanid great king Chosrau I (r. 531 to 579). Since the Sassanids cultivated close cultural contacts with the Mediterranean region , elements of Greek legends - such as the Odyssey - probably also found their way into the fairy tale cycle in their time.

Probably in the later 8th century, a few decades after the spread of Islam in Persia, the translation from Persian into Arabic, Alf Layla ( Thousand Nights ) , arose . This probably happened in Mesopotamia , the old center of the Sassanid Empire and the location of the new capital Baghdad , seat of the Abbasid caliphs . At the same time, the work was " Islamized ", that is, enriched with Islamic formulas and quotations. The oldest fragments are from this time around 850 (so-called Chicago fragment ) and are mentioned in Arabic literature . These translations are characterized by the use of Middle Arabic , an intermediate form between the classical standard Arabic used in the Koran and the Arabic dialects , which have always been reserved for oral use. Around 900, the sister collection One Hundred and One Nights (Arabic Mi'at layla wa-layla ) was created in the far west of the Islamic world. The Arabic title Alf layla wa-layla was first mentioned in a notebook of a Cairo Jew from around 1150 .

In the course of time, further stories of various origins were added to the frame story, for example stories from Arabic sources about the historical caliph Hārūn ar-Raschīd and fantastic stories from Egypt in the 11th and 12th centuries. "Complete" collections, i.e. H. Collections in which a story repertoire was spread over 1001 nights are mentioned in one of the above-mentioned Arabic sources of the 10th century, but it is unlikely that more of them has survived than the story inventory of the cycle of the "Merchant and Djinni". Over the centuries, however, “complete” collections have been compiled anew, which, however, quickly disintegrated. Even the famous story of Sindbad was not included in all versions of the collection. As a rule, only fragments of the collection were likely to have been in circulation, which were then individually combined with other stories to form a new, complete collection of the Thousand and One Nights . Thus there is no closed original text for A Thousand and One Nights with a defined author, collector or editor . Rather, it is an open collection with various editors influenced by the oral storytelling tradition of the Orient. New compilations can be traced back to the end of the 18th century. One of the last is the Egyptian Review (ZÄR), recognized as such by the French orientalist H. Zotenberg, from which some manuscripts reached Europe soon after 1800, and others. a. by Joseph von Hammer, who made a French translation in Constantinople in 1806, but it was never printed (German translation by Zinserling, see below). The manuscripts of this review were also the templates for the printed editions of Boulaq 1835 and Calcutta 1839–1842, the text of which was considered to be the authentic text for a long time because of its quality and (apparent) completeness.

The oldest surviving Arabic text is the Galland manuscript , which was created around 1450 at the earliest. It is a torso that breaks off in the middle of the 282nd night, named after the French orientalist Antoine Galland (1646–1715), who acquired this manuscript in 1701. From 1704 Galland published a French adaptation of the collection of stories and thus initiated the European reception of the Arabian Nights . For the person of Scheherazade, he was inspired by Madame d'Aulnoy and the Marquise d'O , a lady-in-waiting of the Duchess of Burgundy . After his death in 1715, the manuscript came into the possession of the Bibliothèque du Roi , today's French National Library .

After Galland began to receive the Orient in Europe, the paradoxical process arose that European compilations (including the "defusing" adaptations) were translated back into Arabic and thus influenced the Arabic tradition itself. In 2010 the orientalist Claudia Ott announced that she had discovered a previously unknown Arabic manuscript in the Tübingen university library, probably from the period around 1600, which begins in a practically immediate continuation of the Galland manuscript with the 283rd night and lasts until the 542nd night. In 2010 Claudia Ott also discovered the oldest surviving compilation of the Scheherazad stories in the Aga Khan Museum in Andalusia: One Hundred and One Nights , the little sister of the large collection of stories that arose in Magreb and Moorish Andalusia . It dates from 1234.

Schahriyâr, king of an unnamed island "between India and the Empire of China", is so shocked by his wife's infidelity that he has her killed and instructs his vizier to give him a new virgin every - in some versions: every third - night from now on who is also killed the next morning.

After a while, Scheherazade , the vizier's daughter, wants to become the king's wife in order to end the killing. She starts telling him stories; at the end of the night it has reached such an exciting point that the king desperately wants to hear the continuation and postpones the execution. The following night Scheherazade continues the story, interrupting again in the morning at an exciting point, etc. After a thousand and one nights she gave birth to three children in the oriental print version, and the king grants her mercy.

In the final version of the printed edition Breslau 1824–1843, also from the Orient, it showed the king the injustice of his actions and "converted" him; he thanks God for sending him Scheherazade and celebrates a proper wedding with her; Children do not appear in this version. This conclusion can also be found in Habicht's German translation (Breslau 1824).

Galland had no draft text for his rather simple form of the conclusion, but all in all it corresponds most closely to that of the Breslau print: the king admires Scheherazade, inwardly moves away from his oath to have his wife killed after the wedding night and grants her mercy . In a letter from 1702, however, he already sketches this end of the Arabian Nights , which he must have known from his friends, who first informed him of the existence of the collection.

The stories are very different; there are historical tales, anecdotes , love stories, tragedies , comedies , poems , burlesques and religious legends . Historically documented characters also play a role in some stories, such as the caliph Hārūn ar-Raschīd . Often the stories are linked on several levels. The style of speech is often very flowery and uses rhyming prose in some places .

History of translation and impact 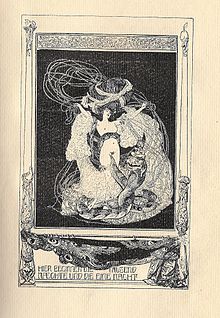 "This is where the thousand nights and one night begin" (subtitles by Franz von Bayros in the illustrated edition published by Karwath and Neumann, Vienna 1906–1914)

August Ernst Zinserling translated the text after the French translation by Joseph von Hammer into German (Stuttgart and Tübingen 1823-1824).

Max Habicht together with Friedrich Heinrich von der Hagen and Karl Schall (Breslau 1825) provided a complete translation based on the translation by Galland (“For the first time supplemented and completely translated from a Tunisian manuscript” ). The first German translation from original Arabic texts was made by the orientalist Gustav Weil . It was published 1837–1841 and was only true to the work cum grano salis : the poetry and rhyming prose parts were not true to form, the repertoire came from a selection of different versions. The first true-to-original translation comes from Richard Francis Burton , who published the stories in 16 volumes from 1885–1888 under the title The Book of the Thousand Nights and a Night , causing a scandal in Victorian England . Based on the Burton translation, a German translation was created by Felix Paul Greve .

An edition published in Vienna between 1906 and 1914, first published by Cary von Karwath and later by Adolf Neumann, was also based on Burton's translation. On the title page, the 18-volume transmission was described as a "complete and in no way abbreviated (or censored) edition based on the oriental texts", but it was not only based on the Arabic original text, as were all previously published German translations, but followed in the erotic text passages, as well as in the title ("The Book of a Thousand Nights and One Night"), clearly the model of Burton. The erotically illustrated and bibliophile edition of 520 copies, intended only for subscribers , caused a scandal soon after its publication in the Austro-Hungarian monarchy and in the German Reich because of the revealing text passages and the illustrations created by Franz von Bayros , Raphael Kirchner and others. The edition's illustrations - e.g. Some of the entire volumes were indexed and confiscated by the authorities.

In 1918 the Tübingen orientalist Enno Littmann was commissioned by Insel Verlag to revise Greve's translation. However, he decided on an almost complete new translation, which he based on the edited Arabic edition from 1839–1842 (Calcutta II) printed in India.

The first translation from the Arabic text of the Wortley Montagu manuscript, a collection that originated in Egypt in 1764 and was brought to the Oxford Bodleian Library a little later, was done by Felix Tauer . It is viewed as a supplement to Littman's transmission.

Mahmud Tarshuna, a Tunisian Arabist, publishes Mi'at layla wa-layla on the basis of six Arabic manuscripts from the 18th and 19th centuries.

The Arabist and Islamic scholar Muhsin Mahdi , born in 1926, presented a critical edition of the Galland manuscript in 1984 after twenty-five years of work . The text of the oldest surviving Arabic version is now available in its original form. In 2004 the Arabist Claudia Ott published a German translation of this edition for the first time. Their goal was a transmission true to the text right down to the sound shape and metrics . During this time, Otto Kallscheuer emphasized her “clear, lively German” and that she did without “orientalizing embellishments”.

Various writers wrote sequels or more or less strongly based narratives, including: