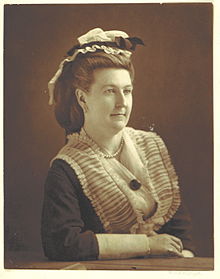 Isabel Burton came from a very conservative upper class, but even as a young woman dreamed of travel and adventure. In 1861 she married the orientalist and explorer Richard Francis Burton against her parents' wishes . Burton was an unsteady man who preferred to travel rather than make money for his family. With the help of her good contacts, Isabel Burton repeatedly found him jobs at British consulates and then secretly took over his duties in order to enable her husband to travel. She edited his books and texts and took care of their publication.

In addition to her role as a self-sacrificing Victorian wife, Isabel Burton also traveled autonomously and with her husband. Among other things, she explored the Brazilian Amazon , Arabia and India . From 1869 to 1871 she lived with her husband in Damascus , from where she often rode into the desert for weeks in Arab men's clothing.

She recorded her travels and experiences in her books and writings. Her main work is her husband's biography ( The Life of Captain Sir Richard F. Burton ). Her autobiography was completed by William Henry Wilkins and published under the title The Romance of Isabel Lady Burton in 1897.

Isabel Burton died in 1896 after a long illness.