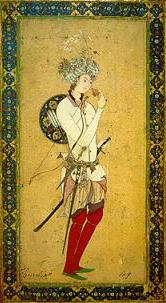 Harun al-Raschid spent his childhood in the city of Balkh and grew up there under the care of the powerful Barmakid dynasty . He came to power in 786 after the death of his brother.

In his time, the caliphate was at its peak politically, economically and culturally. Political stability was ensured above all by the vizier of the Barmakids. After China (798 Harun's embassy in Chang'an ), India and Europe reaching trade relations marked this time. The Islam spread within the former empire.

After ar-Raschid had already participated in successful campaigns against Byzantium as a prince , Byzantine Anatolia was devastated after he took over the government, Cyprus was conquered (805), and high tributes were enforced from the Byzantine empress Irene .

After a victory against the Byzantine city of Herakleia (today Ereğli ), he had the Heraqla Victory Monument built near his capital, ar-Raqqa . Despite these successes, the first signs of disintegration were noticeable in the peripheral areas. The de facto independence of the Rustamids in Algeria (787) and the Aghlabids in Ifrīqiya (800) had to be recognized.

The border between Syria and the Byzantine Empire was secured by ar-Rashīd through a number of fortresses, which were known as al-ʿAwāsim ("those giving security"), because Muslims were to find cover and shelter in them when they returned from military campaigns or the border crossed into enemy territory. He made Manbij the capital of the ʿAwāsim ; other relevant places were Dulūk , Raʿbān, Qūrus, Antioch and Tīzīn.

Similar to Umar Ibn Abd al-Aziz before him , ar-Raschid ordered in 807 that all Jews and Christians should wear markings on their clothing.

Harun ar-Raschid died in Tus, Iran in 809 during a campaign against the Kharijites in Sistan . As early as 802 he had divided the empire between his sons al-Amin and al-Mamun . This succession regulation led to a serious state crisis.

ar-Raschid receives an embassy from Charlemagne at his court in Baghdad. Oil painting by Julius Köckert (1864)

In 798, Harun received an embassy from Charlemagne and gave the Frankish ruler an Indian elephant named Abul Abbas and an ornate water clock with an hour strike and automatic mechanism. Harun and Karl never met in person, but maintained diplomatic relations that probably go back to older Frankish-Arab contacts, although this is only reported in Frankish sources. In 801 Charlemagne received an embassy from Harun in Italy.

No sources have been obtained about the mission of the delegations. However, it is obvious that the common interests of the two great powers of the Islamic morning and the Christian west should lead to coordinated joint actions. Hārūn ar-Raschīd and Charlemagne certainly had common opponents: In the west, the Umayyad state on the Iberian Peninsula , which waged the holy war against the Frankish Empire and at the same time withdrew the extreme west of the Islamic world from the control of the caliph in Baghdad. In the east and in Italy, Byzantium was a potential opponent for the Frankish emperor as well as for the Abbasid caliph. This gave rise to a constellation that was to emerge again and again in the following centuries: Alliances between Muslim and Christian powers were concluded or at least sought to achieve limited goals - they in no way eliminated the fundamental, permanent Christian-Muslim opposition.

Harun ar-Raschid is mentioned in the national anthem of Syria . Among today's Muslims , especially of Persian origin, it is controversial because of its brutality and way of life, while in the West it is mostly perceived as a fairytale figure and plays an important role in many of the stories in the Arabian Nights collection . In contrast to that of his Grand Vizier, who is said to have been poisoned by al-Mamun, in the same cemetery, his grave in Mashhad is not particularly well cared for.