Albert Ball grew up in Nottingham. When the First World War broke out , he volunteered for military service. In October 1914 he was promoted to lieutenant , but found no use at the front in France. From June 1915 Ball took private flight lessons and then asked for his transfer to the Royal Flying Corps (RFC), which he was granted. He was trained as a military pilot and received his license in January 1916. The next month he came to the front in France, where he carried out reconnaissance flights with a Royal Aircraft Factory BE2 . On March 27, 1916, he was shot down by flak fire. He survived unharmed. From April 1916 he was allowed to fly a single-seat Bristol Scout and was transferred to the fighter pilots in May 1916. On May 16, 1916, he scored his first victory in aerial combat. By July 2, he had increased the number of enemy aircraft he had shot down to 7.

In August 1916, Ball was awarded the Military Cross . On his 20th birthday he was promoted to captain and by the end of August he had shot down enemy machines or tethered balloons to 17.

On September 26, 1916, Ball was awarded the Distinguished Service Order with a clasp. By the end of this month, he had 31 kills credited, making him the most successful British fighter pilot at the time. 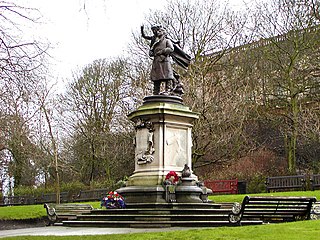 From October 3, 1916 Ball was on a longer vacation in England. There he was received by the king on November 18, 1916. On November 25, 1916, he was awarded the 2nd Distinguished Service Order . He was the first Briton to receive this medal three times.

After various assignments in England, Ball returned to France on April 7, 1917. Further successes in aerial combat came about immediately.

On the evening of May 7, 1917, Albert Ball was shot down behind the front line by fighter pilots from the 11th German Jagdstaffel 11 , probably by Lothar von Richthofen . He did not survive the crash of his machine. German troops recovered his body and buried him with full military honors. His grave is still among the German war graves in the municipal cemetery of Annœullin in France.

On July 8, 1917, he was awarded the Victoria Cross posthumously.

Albert Ball was the first fighter pilot to become popular in large parts of the British Empire for his war effort. In total, he was awarded 44 kills of enemy machines or balloons.