This article deals with the fighter pilot Paul Bäumer. For other namesake see Paul Bäumer (disambiguation) . 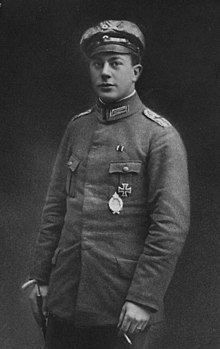 As a teenager, he had traveled to Lake Constance by bike and watched a zeppelin take off there . Since then he has been enthusiastic about aviation. After attending elementary school, Bäumer learned the profession of dental technician from Josef Winckler , a doctor who later became known as a writer . With this activity he financed his own flight training and received his pilot's license in the summer of 1914.

As a volunteer he enlisted after the outbreak of World War I to the Seefliegern the Navy , but was rejected. He then joined the replacement battalion of the 8th Rhenish Infantry Regiment No. 70 and came to the Western Front after almost two months of training . Bäumer fought first at St. Quentin in France and from the beginning of 1915 on the Eastern Front a . a. in the winter battle in Masuria . In Grodno , he was wounded by a shot in the left forearm. After his recovery, he was deployed in his regiment's replacement battalion until mid-August 1915, before Bäumer reported to the air force . There he initially worked as a guard. Only when he personally reported to his commander that he had already taken flying lessons before the war did he start a career as a pilot, initially at Army Air Park 1, on March 26, 1917 after completing his training in Field Aviation Department 7 and on March 28, 1917. June 1917 to Jagdstaffel Boelcke ( Jasta 2 ), two days later to Jagdstaffel 5, where he shot down three enemy observation balloons within four days. In August 1917 he came back to the Boelcke Jagdstaffel, where he received the Golden Military Merit Cross on February 12, 1918 . The award document stated:

“The Vice Sergeant Bäumer has been a pilot at the front since February 19, 1917. On July 12, 13 and 15, 1917, he shot down one enemy tethered balloon each. With the Boelcke Jagdstaffel he has scored fifteen more kills since September. He achieved this number of aerial victories against a superior enemy because of his excellent aggressive spirit and personal courage. "

Bäumer was promoted to lieutenant in the reserve on April 10, 1918 and shot himself down while burning. But he was able to save himself with a parachute jump. After his 30th victory in the air, Bäumer was entered for the Pour le Mérite . He received the highest Prussian bravery award from AKO on November 2, 1918. By the end of the war he had achieved a total of 43 aerial victories. 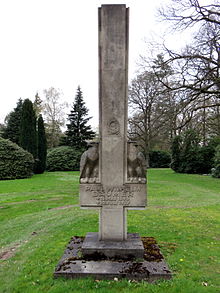 After the war, Bäumer initially returned to his profession and passed his exam as a dentist . In October 1922 he founded the aircraft construction company "Bäumer Aero GmbH" in Hamburg together with his comrade Harry von Bülow-Bothkamp (1897–1976) and worked as an aerobatic pilot . On August 15, 1924, the Bäumer BI Roter Vogel, designed by the TH interns Walter Günter (1899–1937), Walter Mertens and Werner Meyer-Cassel, took off for its maiden flight, which was to take part in the annual Rhön glider competition. The machine, equipped with a Douglas two - cylinder boxer engine with an output of 5.9 kW (8 hp), was only capable of self-starting on slopes, but due to its low mass of only 235 kg, it reached a top speed of 115 km / h and received prize money Competition worth 2000 marks. In May 1925 the Bäumer B II Sausewind followed , which was to take part in the BZ Prize of the Airs and won prizes at the German Sightseeing Flight and Otto Lilienthal Competition. The machine was an aerodynamically advanced monoplane with an elliptical wing and a 48 kW (65 hp) Wright L4 three-cylinder engine . From this machine, a double-decker version as the Bäumer B III Alsterkind and a 1926 further development of the Bäumer B IV Sausewind were derived. Three copies of the latter were built, one of which set a world record in July 1927 at 6,782 m. The next machine was the Bäumer BV Puck designed by the Günter brothers (Siegfried and Walter), which was supposed to serve as an aerobatic biplane, but was never finished due to engine problems. While the new Rohrbach Rofix was flying in , Paul Bäumer fell into the sea on July 15, 1927, two kilometers off the coast of Öresund . Bäumer found his final resting place in the Ohlsdorf cemetery in Hamburg (grave location: H6 - 188).

The Günter brothers developed the Bäumer B VI dragonfly in mid-1929 . Two copies of this type were built, but both crashed in 1930. In the same year the brothers gave up the company.

The "Paul-Bäumer-Straße" in Duisburg-Meiderich was named after him. The forecourt of Hamburg Airport used to be called Paul-Bäumer-Platz after Bäumer . After this square was closed by the construction of the Fuhlsbüttel bypass , a nearby bridge was named after Bäumer. In Berlin-Tempelhof, in the so-called Fliegerviertel, there is a street named after Paul Bäumer called “Bäumerplan”. 51.463611111111 6.7643611111111 30

In Stuttgart-Sillenbuch there is also a Paul-Bäumer-Weg in memory of the fighter pilot. The Heinrich-Gontermann -Weg and the Werner-Voss -Weg are in the immediate vicinity .

Bäumer had been a member of the Pépinière-Corps Suevo-Borussia since 1924 .