Established in 1915 from the merger of the Gnome company, founded in 1905, with Le Rhône (founded in 1897), Gnome et Rhône was nationalized after the Second World War and in May 1945 became Snecma (Société Nationale d'Étude et de Construction de Moteurs d'Aviation ).

The brothers Laurent and Louis Seguin , who had previously mainly manufactured marine and automobile engines in their company Société des Moteurs Gnome, based in Gennevilliers near Paris, took up the development of aircraft engines in 1907. With its air-cooled rotary motors, it followed an unusual construction principle. In the new design, the crankshaft did not turn in the stationary engine housing, but was screwed with its rear end to the fire bulkhead of the aircraft, so that the entire engine block rotated around it. The term rotary or rotary engine was coined for this. The new motor, which the inventors named Gnome , was presented to the world in 1908 and immediately caused a sensation. Not only did the rotation elegantly solve the problem of cylinder cooling, but the new principle also significantly reduced the power-to-weight ratio , a very important argument for aircraft. In addition, the new engines ran very smoothly and evenly. However, the disadvantages were the considerably higher consumption of fuel and, above all, lubricating oil , for which only castor oil could be used due to its high viscosity . In flight, the gyroscopic forces, which were quite considerable due to the large rotating masses, became noticeable, which had an unpleasant effect on the lightly built fighter aircraft in aerial combat.

The two inventors had incorporated a number of other special features in order to achieve all of the results mentioned. The engines had only one positively controlled exhaust valve on each cylinder head , which was quite large and controlled by a cam drum via a bumper and rocker arm . The cam drum was driven by an intermediate gear at half the engine speed. The inlet valve sat in the piston crown and opened and closed swinging freely due to the prevailing pressure conditions. To prevent it from constantly hanging in the open position due to centrifugal force, its mass had to be precisely balanced with the help of two pendular counterweights.

The company named their engines with Greek letters, starting with Omega, a seven-cylinder with 50 hp. The performance was continuously increased, once by increasing the number of cylinders, then by increasing the stroke and bore and finally by arranging two cylinder stars one behind the other. The most powerful but also the last engine in this development was the double lambda, a 14-cylinder engine with 160 hp, which appeared in 1913 .

After that, the company turned to a new development called Monosoupape , i.e. one-valve engine. As the name suggests, the rather elaborate valve in the piston crown was completely dispensed with in this version. The valve in the cylinder head still served as an outlet, but initially remained open during the intake stroke, so that the engine sucked in air. Shortly before reaching bottom dead center, the valve closed and the piston exposed inlet bores in the cylinder walls, through which a rich mixture flowed from the crankcase and mixed with the clean air that was drawn in. The engines in this version, now designated with normal capital letters, starting with A, were built until 1917, the last, 18C, being a double star with 18 cylinders and an output of 240 hp.

The engines of Le Rhône

The company Société des Moteurs Le Rhône brought out its first rotary engine of its own design in 1911 with its pattern B, a seven-cylinder with 60 hp. The outstanding external feature was that the mixture was not fed via the crankcase and the piston crown, but from a separate chamber via pipes leading to each cylinder head to a controlled intake valve. Internally, the Le Rhône engines differed in their main and secondary connecting rods. Up to the E version, a 160 HP engine with 18 cylinders, the bore and stroke remained the same.

After the merger with the Société des Moteurs Gnome in 1915 to form the Société des Moteurs Gnome et Rhône , the proven features of the engines of both companies were used in the further developments. From the end of 1916 onwards, Le Rhône engines were also rebuilt in Germany by the Motorenfabrik Oberursel AG using captured engines . The replica of the nine-cylinder engine was given the type designation UR II. The 11-cylinder UR III engine with 160 hp rated power, developed there based on the same design principle from autumn 1917, was, however, an in-house creation, in France a comparable engine was only started at the end of 1918. - see also: Rotary engine: overview and history . With that, however, the era of rotary engines came to an end. By the end of the First World War, a total of over 100,000 engines of the Gnome , Monosoupape and Le Rhône types , including license production, had been produced.

Licenses all over the world

The advantages of the rotary engines (despite all the serious disadvantages) had impressed aircraft designers around the world so that the company Sociêtê des Moteurs Gnome was approached from everywhere for the issue of licenses. They were obviously given generously, not only to Germany, but also to England, Italy, Russia, Japan and even the USA. This was certainly not to the pleasure of the French government, which was striving to maintain the lead in its aviation industry. In Germany, it was Motorenfabrik Oberursel AG that acquired the license for various sizes of gnome motors as early as 1913 and immediately started developing it. In April 1914 , after the impact of the French Parasol monoplane , Fokker had equipped a similar aircraft with a French Gnome engine. But from then on, the efforts of the Oberursel engine factory found their expression in the developments of Fokker. Ever more powerful engines from Oberursel formed the drive for his aircraft, right up to the Dr.I three- decker . In early 1917, Anthony Fokker even took over 750 of the 4,500 shares in Motorenfabrik Oberursel AG. 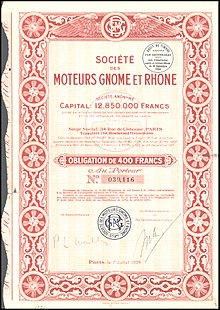 In the early 1920s, the company worked on radial engines based on the English nine-cylinder Bristol Jupiter , for which Gnome et Rhône had acquired a license. This engine became an extremely successful export hit for the company under the designation 9 A, but still as Jupiter . The company Siemens & Halske built it under license. It was used in many aircraft of the time, for example. B. also with the initial equipment of the Dornier Do X and with different versions of the Dornier-Wal family. The Jupiter followed in the 1930s, a number of radial engines with the designation K, of which the 5 K ( titanium ) and 7 K ( Titanium Major ) also have built up on licenses from Bristol. First the 9 K ( Mistral ) and the 14 K ( Mistral Major ), which were then built under license in many countries, e.g. B. in Great Britain ( Alvis ), Italy ( Piaggio and Isotta Fraschini ), the Soviet Union (as M-85), Czechoslovakia (Walter), Switzerland, Japan ( Mitsui Nakajima ), Yugoslavia (Industrija motora Rakovica), Portugal and Romania , were already in-house developments.

In the second half of the 1930s, the 14 M and 14 N engines were built, and they were manufactured until the end of the Second World War . The company had to continue building these two engines for use in German aircraft during the time of the German occupation. The z. B. Motor 14 M built into the Potez 63 was now used in the Gotha Go 244 and the Henschel Hs 129 B. As is usually the case with Gnome et Rhône , there were two versions, one with the designation 04, in which the propeller turned counter-clockwise, while in the version 05 it ran clockwise. The same applied to the 14 N engine, which was installed in versions 48 and 49 in the Messerschmitt Me 323 vans . Here, as a special feature, complete engines with their fairing were used, which had been built for use in either the Bloch 175 or the LeO 45 . The 14 R version, which has been further improved in performance, was also built into the Me 323.

After the end of the war

Like most French aircraft and engine manufacturers, Gnome et Rhône was nationalized after the war and transferred to the new Snecma (Société Nationale d'Etude et Construction de Moteurs d'Aviation). In 1946, the aircraft engine division of the also nationalized Régie Nationale des Usines Renault was added. With that, these two traditional names had disappeared from the aviation sector. 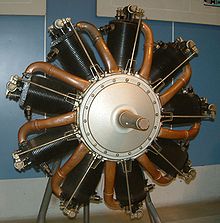 In 1919 the company also manufactured automobiles . The only model 40 CV was equipped with a six-cylinder engine. The displacement was either 6000 cm³ or 8725 cm³. The vehicles had four-wheel brakes. Only three vehicles were built.