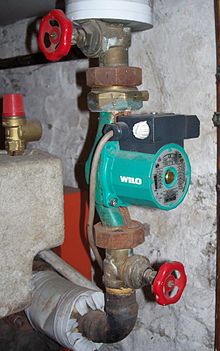 an old pump system, in between a controller and the new energy-saving pump type

A circulation pump in a heating system is a centrifugal pump that conveys the heated heat transfer medium (mostly water ) to the radiators and house connection stations in a closed circuit and at the same time returns the cooled water from the return line to reheat it in the heating system.

The circuit in which the circulation pump only has to do the work to overcome the friction in the pipe system is referred to as the heating circuit. In the closed circuit, apart from the thermosiphon effect (see also thermosiphon convection brake ), there is no lifting work.

Before the availability of electrical energy, hot water heaters worked according to the gravity principle . New buildings were also equipped with it until the 1960s and in the former GDR until the mid-1980s. However, the Westphalian engineer Wilhelm Opländer ( Wilo ) developed the world's first "circulation accelerator" for heating circuits as early as 1928 and thus the forerunner of today's circulation pump.

With the use of circulating pumps, more complex heating circuits with thinner pipes can be implemented and the heating energy can be used more efficiently through demand-dependent controls. Heating engineers like to refer to them as gravity accelerators. They pump relatively large amounts of water and only build up low pump pressures, which ultimately depend on the pipe's flow resistance.

In order to reduce power consumption and wear and tear on the circulation pump, it makes sense to operate it with the lowest output that is sufficient to supply all radiators equally. If the boiler does not provide any thermal energy, the pump should be switched off completely.

Up until the development of cost-effective high-efficiency pumps towards the end of the 20th century, uncontrolled circulating pumps were used, the output and speed of which could either not be set at all or manually in a few specified steps.

If the sum of the pressure losses (flow resistance ) in a heating circuit was known, the resulting volume flow and the pressure built up by the pump could be determined using the pump characteristic.

If half of the thermostatic valves in the heating circuit have been switched off by the user, the volume flow should ideally be halved, while the pump pressure should remain the same. In contrast, the pressure generated by an uncontrolled pump increases when the volume flow decreases. The pump works, so to speak, "against the increased flow resistance" caused by the closing of the thermostatic valves.

The undesired pressure increase results in a considerable loss of energy. Since the pump tries to push more fluid through the throttled heating circuit than necessary, flow noises can also arise.

Here, the speed and power are automatically adjusted to the need for circulated water. For this purpose, the pressure difference between the suction and pressure side is determined and the engine speed and thus the power are controlled so that the differential pressure remains largely constant. The differential pressure is system-specific and is created by the friction of the circulating water flow on the pipe walls and by changing direction at each bend.

The necessary differential pressure is often given in electronically controlled pumps as the delivery head in the unit meter of water column (mWS), which has no longer been legally compliant since the late 1970s . 10.2 mWS correspond to 1 bar. In closed systems, this does not mean the system height, it is merely a measure for overcoming the flow resistance of the entire system at a given flow rate.

Here the setpoint of the differential pressure is changed depending on the volume flow. This regulation takes into account that a different amount of hot water is required in the heating system, depending on requirements (consumption of heat energy), in order to provide the required heat output in the house connection stations. It is worthwhile for circulation pumps that supply larger heating networks and therefore have a high energy requirement (from 5  kilowatts of electricity). There the friction losses of the water through the circulation in the pipeline system play a bigger role.

Pump with energy efficiency class A

Particularly energy-saving circulation pumps (high-efficiency pumps) with automatic electronic control down to 5  watts are more expensive to buy than conventional circulation pumps with 40-100 watts of constant power consumption, which can be amortized through lower power consumption . Between 2005 and 2012 there was an energy label for circulation pumps . Since 2013, the Regulation (EU) 642/2009 issued on the basis of the Ecodesign Directive has made binding requirements for the energy efficiency index of circulating pumps. Corresponding models are marked with the abbreviation “ErP ready”.

Since many pumps are usually in constant operation with constantly high power consumption during the heating season, they are the main cause of increased power consumption in the household, along with outdated, poorly insulated cooling devices. A heating pump can remain in operation for up to 20 years. With an operating time of around 7 months per year (210 days = 5040 hours), an old circulation pump with a power consumption of 85 to 130 watts requires 428–655  kWh of electrical energy - a regulated high-efficiency pump (7–25 watts output), on the other hand, only requires 35–126 kWh. If 400 kWh are not used per heating period, a high-efficiency pump saves 108 euros in energy costs per year at an electricity price of 27 ct / kWh. That is 1,620 euros with an assumed service life of 15 years - interest and electricity price increases not taken into account.

A new, highly efficient circulation pump costs around 400 to 500 euros when installed. With a saving of 100 euros in energy costs per year, a new pump pays for itself after 4 to 5 years. The BAFA since August 2016 promotes the heating optimization with grants. The replacement of heating pumps and hot water circulation pumps with highly efficient pumps is subsidized with 30 percent of the net investment costs.

In a thermal solar system , a heat transfer medium is pumped into the solar collectors by means of a circulating pump when there is sufficient solar radiation, in order to then store the thermal energy temporarily in a buffer store or to use it for domestic water heating or heating. Special heat-resistant solar circulation pumps are required for these systems, as the solar collectors can heat the heat transfer medium to over 200 ° C in extreme cases.

On January 1, 2013, the European Ecodesign Directive (ErP) came into force with strict efficiency specifications for pumps and will be tightened again in two stages in 2015 and 2020. Unregulated circulating pumps in wet rotor design and older electronically regulated pumps are therefore no longer allowed to be offered.