Rotation around the transverse axis in vehicles 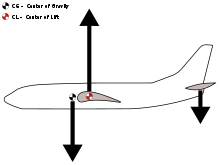 Balance of forces with respect to the transverse axis

The rotational movements around the transverse axis are referred to as nodding in aircraft , since a similar movement is carried out here as when nodding the head . The elevator is used to control this axis . See also: phygoids .

In the case of a helicopter, the pitch angle (of the fuselage including the rotor axis) and the forward speed correlate. Due to the pitch , bending , swing of the rotor blades and the gyroscopic forces acting on them , the plane formed by the circling blades tilts complex relative to the fuselage.

In nautical parlance, a movement of watercraft around the transverse axis is referred to as pitching . See also ship stability . Heavy pounding by cargo ships carries the risk of the cargo slipping , especially if it is not properly lashed . The ship then also needs more water under the keel (in other words: a ship can touch the ground with its bow or stern (propeller, rudder) when pitching).

Assuming that a ship travels across the wave fronts and the waves are at a certain height, it will be particularly excited by waves whose wavelength is twice as long as the ship's length.

In multi-axle land vehicles, the rotational movement around the transverse axis z. B. caused by accelerations in the longitudinal direction. Depending on the sign of the acceleration, a distinction is made between braking and starting pitch. On an uneven road surface, a vehicle is also stimulated to nod, which can reduce driving comfort, especially in vehicles with a short wheelbase. Speed bumps (e.g. in traffic-calmed areas) also encourage nodding. Low-lying vehicle parts such as front spoilers can touch the road.

Tile-like setting of unconnected concrete slabs on motorways historically led to rhythmic nods. The harder a vehicle is sprung and the shorter the wheelbase, the more it reacts to an uneven floor with nods. Bicycles that are only sprung with pneumatic tires are particularly badly affected. Short racing bikes, compact folding bikes , microscooters and inline skates make up the extreme end in comparison. A unicycle , regardless of whether it is powered by muscle power or an electric motor, Segway or others use the nodding and possibly bending of the body of the (unicycle) rider to keep their balance or to control the motor via acceleration sensors.