Life and work as a musician and singer

Nat Cole grew up as the son of Baptist preacher Edward Coles and played the piano in his father's church at the age of four.

He began his musical career with a small formation called "The Rogues of Rhythm" (roughly: "Rhythm rascals"), his brother Eddie soon joined and finally took over the group under his name as "Eddie Cole's Band", later " Eddie Cole's Solid Swingers ”. Under this name they recorded so-called rare records for the sub-label "Sepia" of Decca Records . The band then became part of the orchestra on a Broadway show called " Shuffle Along "; with her they also appeared on the west coast, where the company then failed. Nat Cole then decided to stay in Los Angeles to perform there as a pianist. Bob Lewis, the owner of the Swanee Inn , heard him at the Century Club; he hired him for his club and Nat Cole immediately put together a rhythm section . He chose bassist Wesley Prince , guitarist Oscar Moore and initially drummer Lee Young , but later worked with trios without drums. This is how the legendary Nat King Cole Trio came into being in 1939 - the beginning of his great career.

His role model in piano playing was Earl Hines ; he combined his techniques with the melodic exercises he had learned in his father's church. Shortly after his trio made the first recordings for Capitol in 1943 , it was considered the most influential “small group”. The Nat King Cole Trio sparked a boom in trios and quintets; they followed u. a. the Barbara Carroll Trio, the George Shearing Quintet, the Erroll Garner Trio and the Art Van Damme Quintet. Cole has sung with his fellow musicians in the Nat King Cole Trio from the start. Instrumental pieces were among the recordings, as well as those that were supplemented with the three-part singing. The choral movements were extremely percussive and onomatopoeic. In 1943, in addition to playing the piano, Cole began to sing balladesque, which made him a model for the following crooners , in contrast to swing shouters ; his first successful title in the Billboard charts was All for You by Robert Scherman in November 1943, which reached rank 18 for a week, followed by first hits like Straighten Up and Fly Right (1944, # 9), I Can't See for Looking (# 28) and finally in October 1944 Gee, Baby, Ain't I Good to You , which Cole made the jazz standard . In November 1946, "King" Cole had its first number 1 hit with (I Love You) For Sentimental Reasons , the new song written by Ink Spots' Deek Watson , was in the charts for 25 weeks. At Christmas 1946 (and again in 1947 and 1948) he had a hit with The Christmas Song , in which the vocals dominated; In 1947 he sang the Van Heusen number Harmony in a duet with Johnny Mercer .

Cole's international success as a singer came abruptly in 1948 with his recording of the song Nature Boy , the only significant composition by the then completely unknown Californian dropout Eden Ahbez . In the song, which was written in August 1947, he was accompanied not only by his trio but also by a studio orchestra. Nature Boy was number 1 on the national charts for eight weeks. At the end of the year Oscar Moore left the trio; he was replaced by Irving Ashby , who appeared on Cole's next hit Lost April (# 20), also the last hit song of Eddie DeLange, who died in 1949 .

In September 1954 he had a hit with Charlie Chaplin's composition Smile , which he had composed in 1936 for his feature film Modern Times . In 1955 his trio came to an end, the original line-up of which had long since left; String parts dominated his arrangements. From then on, Cole worked as a soloist for Capitol Records and gave up playing the piano more and more. In this solo career, Cole moved more and more away from jazz to pop, but took on records under a pseudonym (Eddie Laguna, Shorty Nadine, Sam Schmaltz) with jazz greats such as Buddy Rich and Lester Young .

The grave at Forest Lawn Memorial Park in Glendale, California.

Cole's first marriage to Nadine Robinson ended in 1948. Just six days after the divorce, he married the singer Maria Hawkins Ellington on Easter Sunday 1948. The marriage lasted until his death; three children come from the connection, including singer Natalie Cole, who died in 2015 .

Cole was a political advocate for African American rights . He died of lung cancer and was buried in the Forest Lawn Memorial Park in Glendale , California.

Nat King Cole had his own radio show, later with the Nat King Cole Show , which was broadcast on NBC from November 5, 1956, his own television program. The African-American singer and jazz pianist Hazel Scott had already performed her own show, but Cole was the first male singer to appear on the small screen. The originally only 15 minutes long programs were extended to 30 minutes in July 1957. Due to the lack of sponsors, the program was stopped on December 17, 1957.

Nat King Cole also starred in a number of feature films. Best known in Germany is his appearance as the singer in Cat Ballou - You should hang out in Wyoming , together with Stubby Kaye . It was used very often for a theme song, for example in Gardenia - A Woman Wants to Forget ( The Blue Gardenia , 1953), Rat's Nest ( Kiss Me Deadly , 1955), The Land of the Rain Tree ( Raintree County , 1957) and in St. Louis Blues (1958), or only his songs were played, such as after his death in Wie ein Wilder Stier ( Raging Bull , 1980) or in Garp and wie he saw the world ( The World According to Garp , 1982). Some of his movie songs were released on the LP Nat King Cole sings Songs from the Movies (Capitol Vine Series, VMP 1008).

Cole also played a brief supporting role in Orson Welles ' masterpiece Citizen Kane . In 1953, the heyday of 3D films , he stood in front of the camera for the short music film Pretend , advertised as “Hollywood's First Musical Featurette in 3-Dimension”. 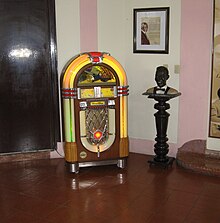