The son of a car mechanic had already taken lessons on the trumpet at the age of twelve; At 15 he began studying at the National School of Arts (Escuela Nacional de Arte) in Havana, which he graduated in 1967. Sandoval initially aspired to a career in the field of classical concert music, where he performed with the BBC Symphony Orchestra and the Leningrad Symphony Orchestra and was recognized by colleagues such as Maurice André and Adolph Herseth . In 1967 he was one of the founding members of the Orquesta Cubana de Musica Moderna , from which the band Irakere developed in 1973 , to which he belonged until 1981. In 1976/77 he worked with David Amram ; In 1977 Sandoval met his idol Dizzy Gillespie , who became his mentor and performed with him at concerts in Cuba. He has been active under his own name since 1981 and made his first records in Cuba under his own name ( Turi 1981, Arturo Sandoval 1982). He went on successful tours with his band Cuban Jazz Masters to Europe and South America; Between 1982 and 1984 Sandoval was named Cuba's best instrumentalist. In 1986 the album Tumbaito was created in Madrid for the German Latin label Messidor ; a live recording from Ronnie Scott's Jazz Club in London was released under the title No Problem . In London he also recorded a studio album with the pianist Chucho Valdés . From 1989 he played for three years in Gillespie's United Nation Orchestra .

The trumpeter made no secret of the fact that he was friends with Fidel Castro and was therefore the recipient of privileges; he lived in a luxurious house in Havana's diplomatic quarter . Nevertheless, before every concert abroad he had to obtain laborious exit permits. In July 1990, during a lengthy European tour, he sat down at the US embassy in Rome; his friend Dizzy Gillespie eventually helped Sandoval's family escape Cuba. Not least because of his help, Arturo Sandoval obtained asylum for himself and his family in the USA in 1990 and settled in Miami . He has been a US citizen since 1999.

Even before his arrival, Sandoval had attracted attention in the United States with several Latin albums; In 1991 this led to a recording contract with one of the major labels , the fusion label GRP Records , on which his aptly titled Flight to Freedom album appeared, which showed off its stylistic range. He was supported in this u. a. by Chick Corea , Danilo Pérez , Anthony Jackson and Dave Weckl .

In the 1990s he worked with his Afro-Cuban band, with whom a number of GRP albums were created. In 1991 Sandoval, u. a. with Ernie Watts , Kenny Kirkland and Charnett Moffett , a Clifford Brown tribute album. At the beginning of 1996 u. a. with Clark Terry , Michael Brecker , Mike Stern and Joey Calderazzo the nostalgic album Swingin ' with bebop and hardbop reminiscences. During this time he was also a professor at Florida International University . In the 2000s he shifted his activities as a pianist and keyboardist to the production of smooth jazz albums for labels such as Warner Brothers and Columbia Records ( My Passion for the Piano ). In 2009 he performed with the WDR Big Band Cologne as a trumpeter with the program Mambo Nights . In 2012 he received the Grammy Award in the category Best Latin Jazz Album for his Dizzy Gillespie tribute album Dear Diz (Every Day I Think Of You) (Concord Jazz)

In the course of his career Arturo Sandoval u. a. with Billy Cobham , Celia Cruz , Peter Erskine , Stan Getz , Dave Grusin , Herbie Hancock , Woody Herman , Michel Legrand , TS Monk , James Moody Chico O'Farrill , Bill Watrous as well as the composer John Williams and the Boston Pops Orchestra . In 1988 he was a member of the George Gruntz Concert Jazz Band .

According to Ian Carr , Sandoval is an excellent virtuoso with an exceptional range, brilliantly fast technique and seemingly superhuman condition; occasionally, however, his playing is characterized by an athletic-technical performance show rather than musical depth. The authors Richard Cook and Brian Morton also problematize his frequent inclination to showmanship; They describe the Clifford Brown album I Remember Clifford from 1991 as Sandoval's best work by far . George Gruntz described Sandoval's tone “like lightning and thunder at the same time, powerful, bright and clear.” He learned it in Cuba, the trumpeter told Gruntz , “Where for the first twenty years of his career he always had to play against a dozen percussionists without a microphone. 'If you want to be heard there, you have to play loud!' "

Arturo Sandoval has received nine Grammy Awards , six Billboard Awards and one Emmy Award so far (2013) . In late 2013 he received the Presidential Medal of Freedom . 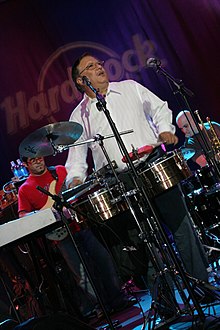 Arturo Sandoval as a percussionist