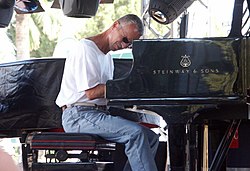 Keith Jarrett (born May 8, 1945 in Allentown , Pennsylvania ) is an American pianist who mainly plays jazz , but also classical music .

Keith Jarrett is the oldest of five sons in a Christian family. He had been taking piano lessons since he was three and was on stage for the first time at the age of seven. As a “child prodigy” he played other concerts. He and his mother turned down an offer to train with Nadia Boulanger in Paris . Jarrett spent a year at Berklee College of Music in Boston, which he - exceptionally gifted and technically adept - could not get much. Even before that, he began his career as a live musician as a bar pianist .

From 1963 he played with Art Blakey for a long time . In 1966 he was hired by the saxophonist Charles Lloyd for his band, with whom he made several European tours and also performed at the Monterey Jazz Festival and the Fillmore West . In mid-1968 he founded his own trio with bassist Charlie Haden and drummer Paul Motian , which he added to saxophonist Dewey Redman from 1971 to 1976 , the so-called American quartet .

However, Jarrett's breakthrough came as a member of Miles Davis ' jazz rock formation , where he mainly played the electric piano and organ between 1969 and 1971 . Only then did he appear as a solo artist and record solo records. By 1975 he played around 50 solo concerts around the world. Recordings such as Solo Concerts Bremen / Lausanne (1974) and The Köln Concert (1975) document this. The recordings of five solo appearances in Japan in front of 40,000 listeners were released in 1978 under the title Sun Bear Concerts in a cassette with ten LPs.

Around the same time, his producer Manfred Eicher brought him to projects such as his so-called European Quartet with saxophonist Jan Garbarek and the rhythm section consisting of Palle Danielsson and Jon Christensen ( Belonging , 1974, My Song , 1978). During the early 1970s Jarrett also worked with other musicians such as Freddie Hubbard , Airto Moreira , Kenny Wheeler ( Gnu High , 1975) and Charlie Haden ( Closeness ).

In addition to the activities in the concert hall, Jarrett also began to be interested in classical music and instruments unusual in jazz. The albums Hymns, Spheres (1976) and Invocations - Moth and the Flame (1979) were made on the Riepp church organ in Ottobeuren , the recording In the Light brought him together with the Südfunk Symphony Orchestra in 1973 , and Book of Ways (1986) presented him on the clavichord ; The multiple award-winning, critically controversial recordings of Johann Sebastian Bach's Goldberg Variations (1989) and his Well-Tempered Clavier (1987/90) that he made during the following years were partly played on the harpsichord .

At the beginning of the 1980s, after a first major personal crisis, he revived the Broadway and Tin-Pan-Alley repertoire with the series of standards recordings that began in 1983 and performed in a trio with Gary Peacock on double bass and Jack DeJohnette on drums also new impulses for the piano trio format. Since then, numerous, mostly live recorded recordings by this group have followed, although the record company made sure to alternate releases with solo performances (from Paris 1988, Vienna 1991 and Milan 1995).

Jarrett suffered from chronic fatigue syndrome for three years since 1996 . During the illness phase he recorded the solo album The Melody at Night, with You in 1998 , which was initially just a private Christmas present for his second wife Rose Anne. In an interview, Jarrett said that every solo concert was something very special for him because this illness had made it clear to him that every concert could be his last. You can also hear that in his music. He is clearly making an effort to play completely at his new concerts and no longer “just go for it” as with his famous recordings from the 1980s.

He also continued his international concert career with his trio. His most important recent recordings include Always Let Me Go (2001), Up for It (2002) and the solo double CD Radiance (2005).

Keith Jarrett's music is, as he reported in a television interview in 2005, shaped by the philosophy and teaching of Georges I. Gurdjieff , whose Sacred Hymns (ECM) he published as early as 1980, as well as by his occupation with various non-musical topics.

Jarrett lives in an 18th-century farmhouse in Oxford Township, New Jersey, in rural Warren County . He uses a converted barn on his property as a practice room and recording studio.

In 1964, Jarrett married Margot Erney, an Emmaus high school friend who he was with in Boston. The couple had two sons, Gabriel and Noah. The marriage ended in divorce in 1979. From 1980 to 2010 he was married to Rose Anne (née Colavito). The Japanese Akiko has been his wife ever since.

Jarrett has four younger brothers, two of whom are also musicians; Chris Jarrett is also a pianist and lives in Germany. His brother Scott Jarrett is a singer-songwriter and producer.

Of the sons from his first marriage, Noah Jarrett is bassist and composer and Gabriel is the drummer.

Keith Jarrett is one of the most successful and style-defining musicians of the past four decades and, particularly through his early solo concerts, has significantly influenced many people's ideas of contemporary improvisation. In doing so, he developed and cultivated an easily understandable, transparent principle of the free flow of motif-based improvisations. The big breakthrough came suddenly in 1975 with the publication of his legendary, actually under unfortunate circumstances, The Köln Concert , which was organized by the then eighteen-year-old concert organizer Vera Brandes . The Cologne Concert was a great success with both critics and the public . The record won the German Phono Academy award and was voted one of the “Records of the Year” by Time Magazine . The sales figures are around 3.5 million CDs and records. The record with its distinctive white cover was seen in many households and "graced the record cabinets of the time like Che Guevara posters in student stalls a decade earlier." It is still Jarrett's best-known record.

In 2002 he was elected to the American Academy of Arts and Sciences . In 2003 Jarrett received the Polar Music Prize , in 2004 he was awarded the Léonie Sonning Music Prize. In 2008 he was inducted into the Down Beat Hall of Fame . In 2014 he received the NEA Jazz Masters Fellowship, the highest American award for jazz musicians.

Over 40 albums by the pianist have been released under the ECM label. He has also edited some recordings of the classical repertoire. Particularly noteworthy here are the recordings of the Goldberg Variations and the Well-Tempered Clavier by Johann Sebastian Bach , as well as the solo suites for harpsichord by Georg Friedrich Handel and the 24 Preludes and Fugues by Dmitri Shostakovich . Keith Jarrett is also a pianist in productions by other musicians such as Miles Davis, Jan Garbarek and Kenny Wheeler.

In addition to the famous solo concerts on which he exclusively improvises, his jazz trio with Gary Peacock on bass and Jack DeJohnette on drums is very well known. The collaboration began with the recording of the Standards albums and continues to this day. The trio tries its hand at free improvisation on more recent live recordings, while the interpretation of jazz standards is emphasized on older albums .

The short compositions that he wrote with his two quartets, the European and the American, also deserve attention, especially in the 1970s.

In addition to the piano, Keith Jarrett also plays the organ , flute or saxophone on some recordings .