The title of this article is ambiguous. Further meanings are listed under Ragtime (disambiguation) .

Ragtime is a forerunner of jazz that originated in the USA and had its heyday between 1899 and 1914. It is regarded as “America's classical music” and is today mainly perceived and practiced as a piano style, but was also played on other instruments, especially the banjo , but also in small and medium-sized ensemble formations.

The usual etymological interpretation derives the name ragtime from ragged time ("torn time"), which refers to the syncopated melody and its contrast to the rigid rhythm of the accompaniment. Another interpretation suggests a reference in the Musical Record of 1899, which says: "The negroes call their clog-dancing 'ragging' and the dance a 'rag'". During around 1900 with ragtime different branches of Afro-American music -Entertainments were called and even John Philip Sousa took orchestrated ragtime into his repertoire and blues musicians like Blind Blake and Blind Boy Fuller also transferred the ragtime to the guitar, today it is mostly understood as the "city ragtime" played on the piano. A third, controversially discussed possibility is shown by blues researcher Karl Gert zur Heide, who on the one hand points to the highly acclaimed US appearances of Raqs-Sharki groups during the period in which the ragtime was created, including at the world exhibition in Chicago in 1893, on the other hand, analytically, a highly rhythmic one Relationship between Ragtime and Raqs Sharki determined.

Characteristics of ragtime are, on the one hand, a revealing syncopation in the melody part, which often runs against a simple bass line in two-quarter or four-quarter time, and, on the other hand, a set of related themes that were connected to one another within a piece by modulations.

The “city ragtime” is characterized by the stride technique of the left hand, with the bass (mostly in octave beats) on eighth beats 1 and 3 of the 2/4 beats typical of ragtime , and the chords on the 2nd and 4th eighth beats be played. The "disruption" arises from the fact that the melody notated by the right hand, especially in sixteenth and eighth notes, has temporal shifts from the measure continuously played by the left hand, often sixteenth-note crossings over the middle of the measure or the barline.

Some ragtime composers have succeeded in making the Afro-American origins of ragtime syncopation audible in some of their works. In many cases the rhythm is similar to the habanera, which may have been passed down directly from the African music of the ancestors in Latin America because drums were not banned there, and which was translated to other instruments in the USA.

Other important stylistic device of Ragtime are grinders (slurs) "with blue notes ", chromatic passages, entanglement of major and minor, and close Tonhäufungen (cluster).

Ragtime is first of all composed music, and the element of improvisation is not an essential ingredient of the ragtime game. It is historically not certain what significance it initially had. The interpretation of a rag is very individual, just take the Scott Joplin interpretations by Marcus Roberts in the style of Chicago jazz . Many of the early jazz pianists, however, came from ragtime, and some of the earliest jazz standards were rag compositions.

The formal structure of a rag follows the structure of a march (some rags still have the designation “March” in the title, section C is sometimes referred to as “trio”). Sections of 16 bars each - so-called “Strains” - are often arranged according to the AA-BB-A-CC-DD scheme, with the C and D strains usually in a different key - mostly the subdominant . At the beginning there is often a short introduction, and sometimes a short transition before section C. All sections are usually played twice, the exception is usually the repetition of section A after section B. A coda is rather rare (example: Magnetic Rag by Scott Joplin ). 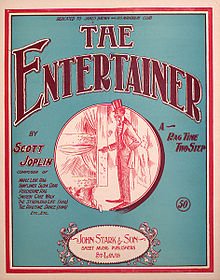 With the cakewalk , a dance fashion came up in the 1890s to which syncopated music was played. The syncopation of the melodies was derived from the Afro-American rhythms of the folk music from which this new dance music ultimately came from. Predecessors can be found since around 1860. According to Andre Asriel , popular ragtime-style piano music was being played in the Midwest and Eastern United States long before ragtime compositions were first printed. “These are naive transfers of the banjo playing style used to accompany the popular cake walk on the piano.” However, the fully developed ragtime only existed since around 1885, when musically trained pianist-composers seized this material and “gave it up raised a higher level of artistic perfection ”, such as Ben Harney with“ You've Been a Good Old Wagon But You've Done Broke Down ”.

The focus of development of the ragtime was in Missouri . In 1897 the first ragtime compositions appeared, first the Louisiana Rag by Theodore Northrup . The first major ragtime musician and pianist was Tom Turpin , whose Harlem Rag, composed in 1892, was also published in 1897. Eubie Blake later handed down a rag by the traveling pianist Jesse Pickett from 1897, a piece that still seemed a bit essayistic. Likewise, in the same year 1897, Ben Harney's Ragtime Instructor appeared with ragtime arrangements of popular melodies written by Theodore Northrup.

The world exhibition in St. Louis in 1904 ( Louisiana Purchase Exposition ), in the context of which Tom Turpin had organized a large ragtime competition, were dedicated to a number of ragtimes, including the St. Louis Rag by Tom Turpin, the St. Louis Tickle by Theron Catlen Bennet and The Cascades in memory of Scott Joplin's World's Fair Water Games . The ragtime had the first emotional climax for its musicians five years after the publication of Joplin's Maple Leaf Rag (edition 1/2 million). One of the main places of ragtime was Joplin's residence Sedalia , Missouri , where his publisher John Stark had also been based since 1885. Another center of ragtime was Atlantic City , where Jens Bodewalt Lampe worked at that time , who wrote Creole Belles (1900), one of the most successful titles in the genre.

From 1906 until World War I , ragtime was popular music in the United States and eventually became popular in Europe as well. No longer strictly following the form of the ragtime composition, but only using stylistic elements of the rag, the so-called ragtime songs - hits in the style of the time - were widespread at this time. Of the larger ragtime bands, that of James Reese Europe in New York became particularly popular. Pure saxophone ensembles presented ragtime in a new way.

With the death of Scott Joplin in 1917, the ragtime era ended and was replaced by the jazz era. But also during this time new rags were created, mainly pianistically daring compositions, which were also called novelty or novelty ragtime . Eubie Blake had great success with Noble Sissle in 1921 with the Broadway show Shuffle Along , the music that his Shuffle Along Orchestra played was shaped by ragtime, but also by jazz.

The Harlem Stride emerged from ragtime in the 1920s and 30s, which was further developed after the bebop and thus found its way into jazz throughout.

In the early jazz bands, rags were played alongside blues pieces and used as the basis for collective improvisations in the style of New Orleans jazz . It is known for band leaders like Papa Jack Laine or John Robichaux that they mostly performed rags from the Red Back Book . Songs like Alexander's Ragtime Band (by Irving Berlin , which is not a rag itself) allude to this tendency, especially since - before the word jazz came up in 1917 - early jazz was sometimes referred to as "ragtime".

The best-known rags today are Scott Joplin's The Entertainer from 1902, who had great success through its use in the 1973 film The Clou , and the best-selling ragtime composition Twelfth Street Rag by Euday as a sheet music edition and as a record (with Pee Wee Hunt (1948)) Bowman from 1914, when the end of the ragtime era began. The main representatives of the classic composed ragtime include, alongside Scott Joplin, Tom Turpin , James Scott and Joseph Lamb . Already less bound note and jazz excessive played Jelly Roll Morton in New Orleans who claimed themselves to have invented jazz in the 1902nd His jazz compositions are either very close to ragtime or are proven rags like his Perfect Rag .

Eubie Blake , who was active in Baltimore, Atlantic City and New York, and composed rags from 1899 onwards, was an important role model for some of the first jazz pianists . His rags are an example of the fact that these works are definitely demanding piano literature. This applies to the rags of both Afro-American (e.g. Joplin and Blake) and Euro-American composers (e.g. the young George Gershwin ). One of the most beautiful rags is the Heliotrope Bouquet, composed by Louis Chauvin , the winner of the St. Louis competition, and Scott Joplin .

Well-known modern interpreters of ragtime are the classical pianist William Bolcom and the jazz pianist Marcus Roberts . Reginald R. Robinson is a pianist who devotes himself exclusively to ragtime on his recordings . On the albums of the Norwegian pianist Morten Gunnar Larsen there are not only songs from early jazz but also rags. One orchestra that deals intensively with ragtime is the American Paragon Ragtime Orchestra under the direction of Rick Benjamin. John Arpin is considered a particularly authentic interpreter on the piano these days . In the 21st century, Allan Jaffe wrote some rags, especially for the guitar , who also emerged as an interpreter.