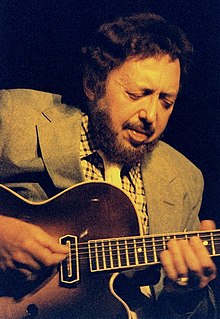 Portrait of Barney Kessel on stage with an archtop electric guitar

Barney Kessel's career began at the age of 14 in his native Muskogee. There he was the only white man to play in a swing band. His first job in Los Angeles , where he moved in 1942, he had in 1942 in the Chico Marx Orchestra , which the comedian Chico Marx had founded. One of his first recordings can be heard in the short film Jammin 'The Blues with Lester Young (May 1944). His first singles came out on the small record label Atomic Records , recorded on June 7, 1945 in Los Angeles, Atom Buster / What Is This Thing Called Love? (Atomic 209) and Slick Chick / Man I Love (Atomic 210). Until December 1945 he worked in the band of Charlie Barnet , until 1946 also with Artie Shaw , for whom participated in over 70 titles. With musicians from Shaw's band such as Dodo Marmarosa and Herbie Steward , the first recordings were made under his own name. He first appeared on February 26, 1947 in the cast of Charlie Parker ’s New Stars for the LP The Bird Loves The Blues . He later played with Benny Goodman , Lester Young, Billie Holiday and Oscar Peterson (LP Peterson Plays Cole Porter , recorded on November 25, 1951) with. Barney Kessel is seen as a defining guitarist of modern jazz in the 1950s. On March 28, 1955 he had put together his Barney Kessel Septet , with which he recorded the LP Barney Kessel, Vol. 3, To Swing Or Not To Swing . The Barney Kessel Quintet recorded the LPs Barney Kessel, Vol. 2 and Vol. 1 . In addition, Kessel has worked on countless recordings such as Red Norvo , Roy Eldridge , Harry Sweets Edison , Ben Webster , Stuff Smith , Woody Herman and Buddy DeFranco . From 1953 on he released a number of albums; The trio LPs with the Poll Winner formation with bassist Ray Brown and drummer Shelly Manne , which were made between 1957 and 1959, stand out in particular . On August 30, 1957, he first appeared as an accompanist for Peggy Lee on their single Listen To The Rockin 'Bird / Uninvited Dream .

The April 24, 1961 for Duane Eddy resulting Instrumentalhit Ring of Fire was the first session of Barney Kessel in the recording studios of Los Angeles with other renowned musicians under the name of The Wrecking Crew . From then on, this work became his main occupation. With that he changed stylistically from jazz to Californian pop-rock , because he accompanied artists such as Elvis Presley , Dean Martin , Beach Boys (“Wouldn't It Be Nice”) or Frank Sinatra . He was part of the Wall of Sound created by Phil Spector , for example in the Righteous Brothers ' global hit You've Lost That Lovin 'Feelin' . Kessel has appeared on almost all of these artists' hits, including albums such as Pet Sounds by the Beach Boys. With Wouldn't It Be Nice you can hear his unusual playing with the 12-string guitar as an intro for 4 bars .

In early 1969 Kessel gave up his studio activity and played the programmatic album Feelin 'Free (February 1969) with Bobby Hutcherson and Elvin Jones . As a freelance musician, he played in a duo with Herb Ellis and in a trio with Charlie Byrd . He also published the teaching work The Guitar , wrote other music didactic works and gave master classes all over the world. His most famous seminar was The Effective Guitarist .

Kessel has not been able to perform since a stroke in 1992. He died of a brain tumor, leaving behind his third wife, Phyllis Van Doren-Kessel, and two sons, producers and musicians, Dan and David Kessel, who has worked with Phil Spector, John Lennon, Cher and Leonard Cohen.

Based on Charlie Parker's style, Barney Kessel renewed the way of playing jazz guitar . He was one of the first guitarists to play the jazz style bebop on this instrument . Kessel is also one of a number of jazz guitarists including Tiny Grimes , Oscar Moore , Irving Ashby and Chuck Wayne who play in the Charlie Christian tradition . Like Jimmy Raney , he developed his innovations into his own style, in which he above all integrated Christian's chord playing into his style ( Attila Zoller ).

Memorial stone in the Street of Fame in Burghausen