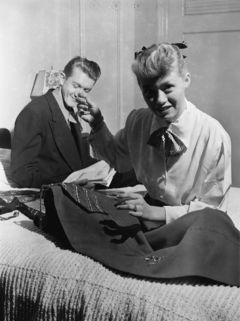 Cooper learned to play the clarinet in 1940 and tenor saxophone from 1941. He became known with Stan Kenton , with whom he was engaged as a saxophonist between 1945 and 1951. During this time he married the singer June Christy . As a member of the Lighthouse All Stars , he appeared between 1952 and 1962 with Shorty Rogers , Pete Rugolo , Bud Shank and Christy, but also with Jimmy Giuffre ; he was also involved in the recording of Ella Fitzgerald Sings the Cole Porter Songbook . In 1955 he was a founding member of the Shelly Manne & His Men formation .

With Bud Shank he went on a European tour in 1957 and 1958. a. performed with Attila Zoller , Albert Mangelsdorff and Gary Peacock . In 1959 he became a partner in the record label Lighthouse Music . He wrote a Music for Saxophones and Symphony Orchestra (1963) as well as film and television music. Since the mid-1960s, he earned his living as a studio musician, and later performed with the orchestras of Frank Capp and Nat Pierce and Bob Florence . He then worked again with Rogers and the Lighthouse All Stars . Cooper was the first jazz musician to convince on the oboe.