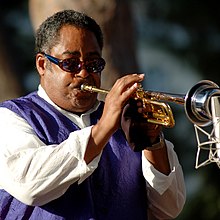 As a fifteen year old, Faddis played in Dizzy Gillespie's combo at the Jazz Workshop in San Francisco . In 1971 he became a soloist in Lionel Hamptons Band in New York City and played in the Monday sessions of the Thad Jones / Mel Lewis Orchestra . In February 1972 he made his debut under Charles Mingus in the New York Philharmonic Hall at the Charles Mingus and Friends in Concert , where he stood in for the sick Roy Eldridge in the “Little Royal Suite” , which brought the 18-year-old's artistic breakthrough. He then performed with Sarah Vaughan at Carnegie Hall and with Eubie Blake at the Annual Colorado Jazz Party , and made music with the big bands of Gil Evans and Count Basie .

In the following years he made numerous studio recordings with a wide variety of musicians such as Duke Ellington , the Rolling Stones , Frank Sinatra , Kool & The Gang , Luther Vandross , Quincy Jones , Billy Joel and Stanley Clarke . From 1983 he worked with the saxophonist Greg Osby and the pianist James Williams . From 1987 he was a soloist in Gillespie's Big Band and from 1989 in Dizzy's United Nation Orchestra . He is also musical director of the Carnegie Hall Centennial Jazz Band . In 1995 he led the The Majesty of Louis Armstrong Tour of the Lincoln Center Jazz Orchestra . In 1999 Faddis released the Grammy-nominated album Remembrances on Chesky Records, which was based almost entirely on ballads and other works by the Argentine composer and arranger Carlos Franzetti . In 2000 he conducted the San Francisco Symphony Orchestra with works by Duke Ellington.

In 1997 Faddis' jazz opera Lulu Noir (based on Frank Wedekind's play) premiered at the American Music Theater Festival . In addition to numerous recordings with other bands appeared under his leadership and his name u. a. the albums Hornucopia , Into the Faddisphere , Legacy , Youngblood , Good and Plenty , Oscar Peterson & Jon Faddis , Jon & Billy (with Billy Harper ) and Take Double (with Clark Terry ).